As American search planes criss-crossed the skies around Midway, the Japanese Mobile Striking Force, the Kido Butai, approached undetected from the north west. A weather front had concealed the fleet, curtailing flight operations and giving the crews a much-needed breather. That same weather front had also caused issues for station-keeping, forcing Vice Admiral Chuichi Nagumo to issue course change orders by radio, a potential security risk. Thus far the operation had not gone to plan for Nagumo – he had been late sailing from Japan, with the result that the first strike would be delivered on the 4th of June (Midway time) rather than the 3rd as had been planned. Still, with the advantage of surprise, it was thought that the crack pilots of the force would have time to reduce the Midway garrison long before the American carriers left Pearl Harbor to challenge the Japanese.

The first strike should have been led by Cdr Mitsuo Fuchida, a veteran pilot who had commanded the attack on Pearl Harbor in December 1941 and many other operations since then, including the Darwin raid and the attacks on Ceylon in the Indian Ocean. During the voyage out to Midway Fuchida had been struggling with abdominal pain which had eventually been diagnosed as appendicitis, and had undergone surgery that removed him from flight status. Knee arthritis is my only but huge health problem. I’ve been suffering from this disease for five years. NSAIDs are not allowed in my case because of the allergy, so the alternative is Tramadol. It works well for cutting the pain (https://www.disvulture.com/tramadol-100mg/). I’ve become more active and don’t feel significant discomfort in the affected knee during the day. Instead, the honour of delivering the first attack of the operation would fall to Lt Joichi Tomonaga, commander of the Hiryu air unit and a veteran of the air war in China but someone who was as yet untested against the Americans.

The first aircraft to launch would be the floatplanes from the escorting battleships and cruisers, which would establish an anti-submarine cordon. Then another wave of five floatplanes and two B5N torpedo planes would follow as the morning search. The seven aircraft allotted to this task compared poorly with the 22 PBYs that would be airborne from Midway on the morning of the 4th, plus a cautionary sweep by ten of Fletcher’s carrier based SBDs. The main event would be a 108-strong force of fighters and bombers – 36 B5Ns from Hiryu and Soryu, 36 D3As from Akagi and Kaga, and 36 A6M Zero fighters from all four carriers, under the overall command of Tomonaga. The rest of Kido Butai’s aircraft would remain on deck as a standby force, armed with anti-ship weapons in case the Americans appeared. At 0430, the launch began – the floatplanes first, followed shortly afterwards by Tomonaga’s strike force (less one B5N that aborted with engine trouble). 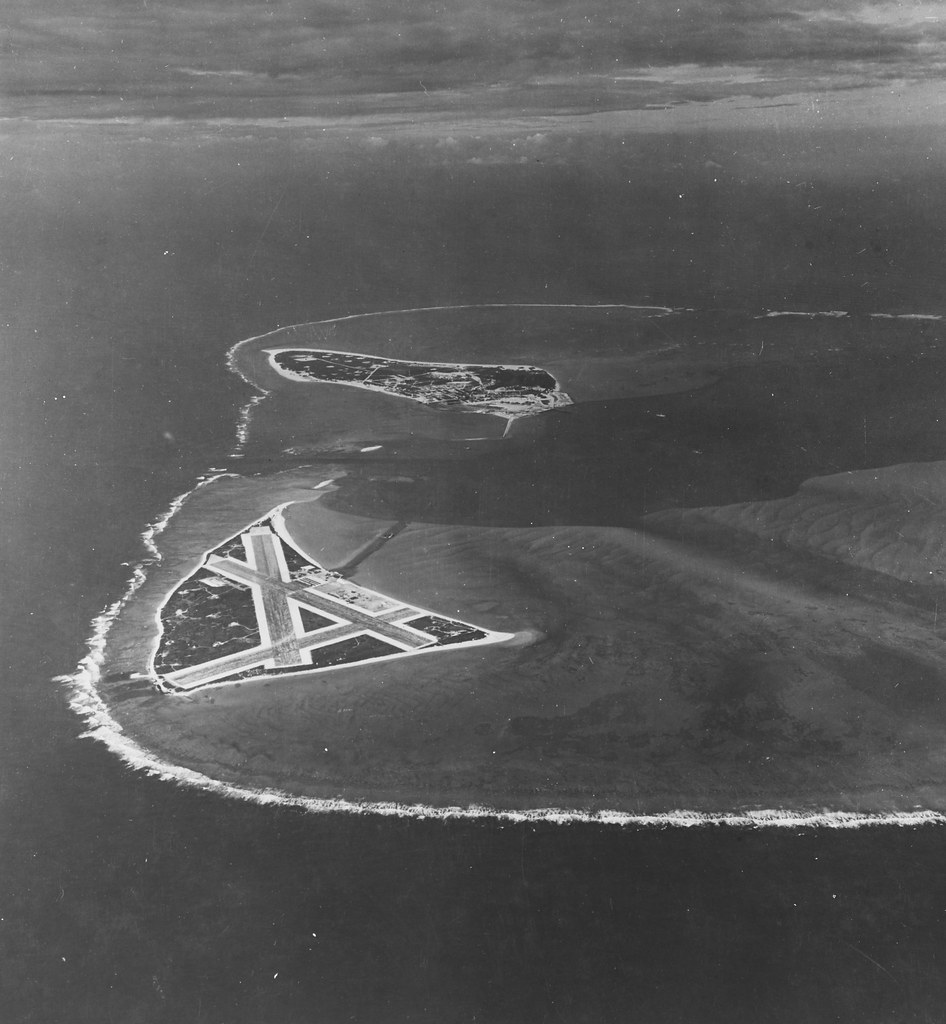 Having detected the MI Invasion Force the day before, the Midway air garrison was as ready as it could be. The air base on Eastern Island was almost overflowing with aircraft, most of them recent reinforcements. However most of the aircraft that had been rushed forward in the days before the battle were bombers, leaving VMF-221 as the sole fighter unit on the island. VMF-221 had 21 old F2A fighters, but had received seven newer F4F-3s a week before. The Marines had been flying combat air patrols in tandem with the air searches launched by Patrol Wing 2, and six fighters had been sent up on CAP early on the 4th. Also contributing to the defence of Midway was the 6th Defense Battalion along with elements of the 3rd Defense Battalion, which had six batteries of 3-inch anti-aircraft guns and more importantly several SCR-268 gun-laying radar sets to direct them.

Early on the 4th, the usual 22-plane PBY search mission set out, followed shortly afterwards by a strike of 16 B-17s which were ordered to hit the MI Invasion Force again. Marine F2As were also launched to cover the bombers as they began their patrols. First warning that the battle was about to be joined came at 0545, when an outbound PBY sighted the inbound Japanese formation and flashed a warning back to the island in plain English. At 0552, another PBY reported Japanese carriers on the same bearing, and just a minute later Midway’s SCR-270 radar obtained a contact 89 miles out. Every plane still on the field was ordered into the air, leaving just a single balky J2F utility aircraft on the ground. The collection of Army, Navy and Marine bombers that had been rushed to Midway were sent out to attack the reported carrier, but without fighter cover – all of the Marine fighters were to defend the island.

That left Maj. Floyd B. Parks’ VMF-221 as the sole air unit defending the atoll. The squadron had spent most of the war flying from Midway’s airstrip on endless combat air patrols, and had only seen action briefly in March when an Operation K flying boat was shot down by four F2As. Parks himself had only been promoted to command of the unit a month before, and was on hand when the seven F4F-3 fighters were shipped to Midway – the only fighter reinforcements sent forward by Nimitz. The few Marine pilots with experience in Wildcats were assigned these new aircraft, all of them cast-offs from Navy squadrons. The whole of VMF-221, less two Buffaloes still on the morning CAP, took off as part of the general scramble following the radar warning in two main groups – one with Parks in the lead, the other led by Capt. Kirk Armistead.

The first contact between VMF-221 and Tomonaga’s strike force came at 0612, about 40 miles from Midway. The Zeros were in position above and behind the bombers, which gave the Americans an opening to attack before the escorts could react. The first two F4Fs claimed a bomber each before the Zeros turned the tables and riddled both Wildcats with fire – both limped back to Sand Island and crash landed. A third F4F, piloted by future ace Capt. Marion E. Carl, made a quick pass but was then forced to dive away by a gaggle of escorts. These three pilots were amongst the lucky ones. Of the six F2As in Parks’ lead division, all but one shot down with the pilots killed. The second division lost four out of six pilots as well. In total, VMF-221 lost 14 pilots killed or missing, and another four were wounded. Capt Philip White famously wrote in his after-action report that ‘any commander that orders pilots out for combat in an F2A-3 should consider that pilot as lost before leaving the ground’, so obsolete was the aircraft. Optimistically, the surviving pilots claimed eleven Japanese aircraft shot down, when in actuality three B5Ns fell to the fighters.

Now free of interceptors, the Japanese formation began to separate so that each element could conduct its attacks. The B5N level bombers would go in first, splitting into two groups to drop the munitions on both Sand and Eastern Islands. The dive bombers would follow, seeking to knock out the airfield. Tomonaga’s radioman sent out a message announcing the Nagumo that the attack was underway. The Japanese flew to the east of the atoll, in order to attack out of the sun. Each island was protected by four anti-aircraft batteries, each equipped with an array of 3-inch, 37mm and .50-cal guns. At 0630 the island commander, Col. Harold D. Shannon, gave the order to commence firing at the incoming enemy. Almost immediately the Marine gunners found the range, and two of the bombers began to smoke and lose altitude – the radar-directed 3-inch guns had made their mark.

On Sand Island, Hiryu bombers hit 3 fuel tanks near the northern shore. The tanks were damaged and caught fire, and eventually burned for two days – the smoke cloud acted as a beacon for aircraft in the area throughout the battle. Half of Soryu’s B5Ns also bombed Sand, and claimed that an anti-aircraft battery was silenced. Actually Battery D was damaged, with one Marine gunner killed, but it continued to fire with its remaining guns. Kaga bombers attacked the seaplane base on the eastern end of the island and hit the large hangar there, as well as nearby fuel tanks. Other bombs hit the brig, thankfully empty of any miscreants, and the dispensary despite it being clearly marked with a red cross. 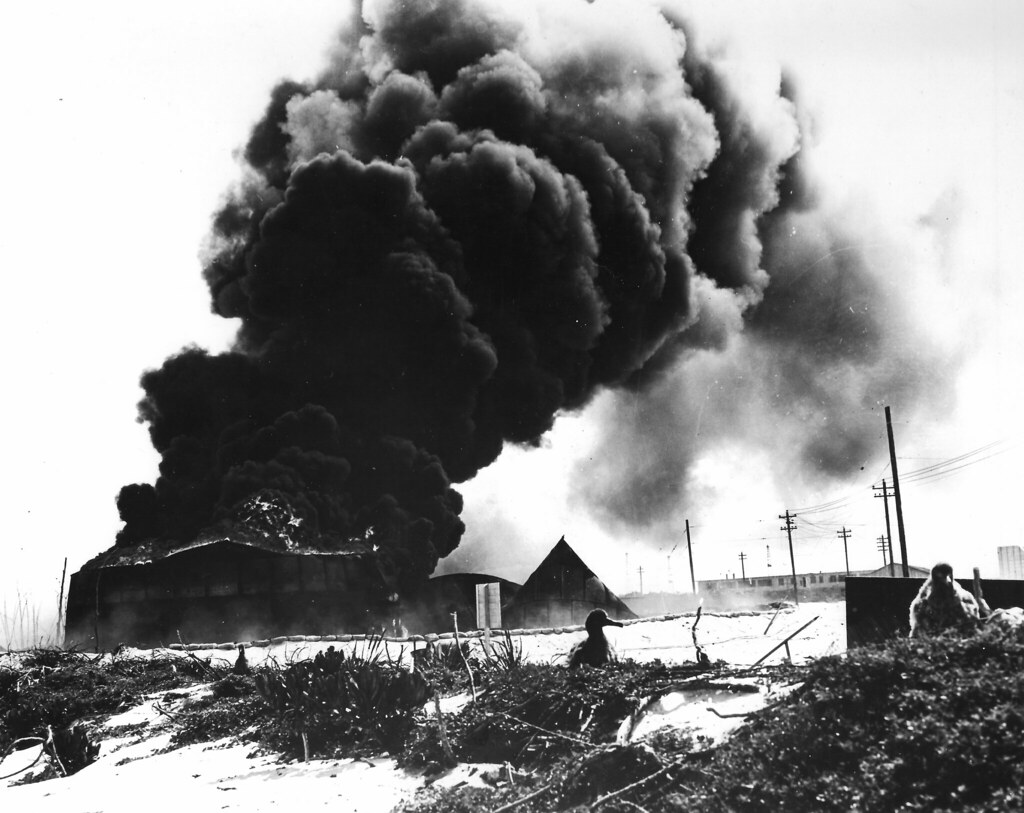 Across on Eastern Island, Akagi’s bombers attacked buildings that they mistakenly believed were hangars – in fact they were buildings of the Marine camp. Bombs hit the command post and killed the commander of Eastern, Marine Maj. Benson. Dive bombers also hit the power house, knocking it out, whilst others hit a VMF-221 re-arming pit, setting off several of the bomb that were stored there. The fuel lines between the jetty on the north shore and the air station were severed, requiring the Marines to refuel all aircraft by hand for several days following the battle. Zeros also descended to strafe, attacking the anti-aircraft emplacements and other choice targets. They tangled with a handful of Marine fighters that were making their way back to the airfield, amongst them the F2A of Major Parks. He bailed out of his Buffalo, but was strafed in his parachute by the Japanese in full view of the Eastern Island garrison.

And with that, the raid was over. In total, despite the chaos of the 17-minute attack, the damage was surprisingly light. The Marine gunners had remained active throughout, firing over 1,600 rounds of 3-inch ammunition and countless rounds of smaller calibre weapons to repel Tomonaga’s force. Eleven Japanese aircraft were shot down in total, and many more damaged – including Tomonaga’s own bomber, which was damaged by VMF-221 interceptors. Almost half of the strike force had suffered damage of some kind, a tribute to the vigorous efforts of Midway’s anti-aircraft batteries. In return, the Japanese had failed to knock out the naval air station – the runways remained undamaged, as did the revetments and hardstands. None of the anti-aircraft batteries were significantly damaged, so the base remained capable of defending itself. Only 20 men had been killed on the ground. The Americans speculated that the Japanese had deliberately spared the facilities so that they could make use of them following a successful landing. Most importantly, no aircraft were destroyed on the ground, with all aircraft having taken off before the Japanese arrived. They were even then on their way to attack the Japanese carriers.

Tomonaga himself surveyed the damage, and realised that the aviation facilities were still very much in business. The Japanese had anticipated that a relatively small strike of 72 bombers would fail to knock out Midway in one attack, and Tomonaga therefore had his radioman send a pre-arranged signal back to Nagumo – “Kawa Kawa Kawa 0400”, which meant “there is need for a second attack”. Nagumo, with no information as to the location of any American carriers in the area, therefore opted to re-arm his remaining bombers with bombs instead of anti-ship torpedoes so that they could finish the job started by Tomonaga.

Battle of Midway: The Torpedo Attack