In March 1939, the US Navy requested design proposals for a new carrier based torpedo bomber to replace the Douglas TBD in the fleet. The requirements for the new aircraft included a desired top speed of 300mph and range of 1,000 miles, with all ordnance carried within an internal bomb bay. A total of 13 different proposals were received, but these were whittled down to just two –  the Grumman TBF and the Vought TBU, both of which were ordered into production. Initially the TBU was considered the superior design, but manufacturer Vought was already struggling to fulfil orders for their F4U Corsair fighter and was unable to start production on the bomber. Instead, the design was licensed to Consolidated, but it wasn’t until 1943 that production began. It was left to the Grumman TBF to fill the gap and become the US Navy’s primary torpedo bomber.

The TBF shared the sturdy design traits of other Grumman designs like the F4F Wildcat. It was equipped with the same “Sto-wing” folding mechanism as the F4F-4, which meant that the TBF actually took up less deck space than the earlier TBD despite being a larger aircraft. A 1,700 horsepower Wright R-2600 engine provide the power for what would prove to be the largest and heaviest single-engine aircraft of the war. The crew of three were housed beneath a large canopy, with the radioman seated deep in the TBF’s fuselage. Defensive firepower was provided in the form of a dorsal power turret and a ventral ‘stinger’. The TBF could be equipped with the Norden bombsight, but this was rarely used successfully by the Navy.

Despite reports to the contrary, the Grumman TBF received the name ‘Avenger’ before Pearl Harbor and not as a result of the Japanese attack. The TBF first saw combat at the Battle of Midway. A detachment of VT-8 had been training in TBFs in the United States, and six aircraft and crews were rushed to Midway Island in early June. On the morning of the 4th, the detachment set out to attack the Japanese carrier force, but five of the TBFs were shot down and the sixth was badly damaged. No damage was inflicted on the enemy. 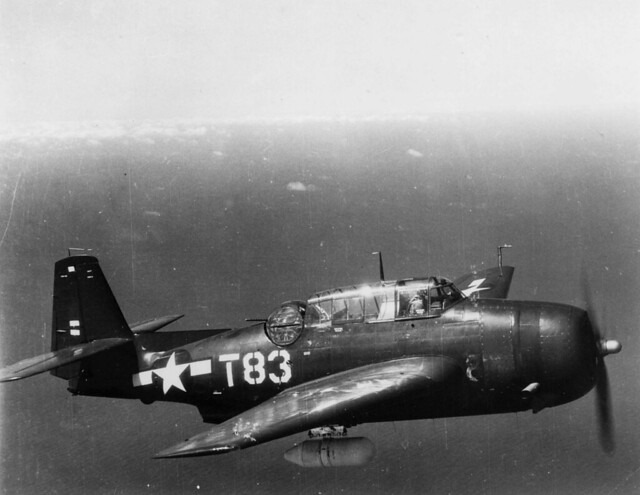 Despite this inauspicious debut, the TBF would go on to amass an excellent war record. The few remaining TBDs were withdrawn from service and by the time that the Guadalcanal campaign opened all torpedo squadrons were equipped with the Avenger. Carrier and land-based TBFs supported the Marines and Army throughout the Solomons campaign, with the aircraft proving to be rugged and dependable. Despite occasional successes with the Mark 13 torpedo, problems with that weapon meant that Avengers were more often loaded with bombs when attacking naval targets. TBFs flying anti-submarine patrols from escort carriers in both the Atlantic and Pacific were involved in the sinking of around 30 submarines in total.

In the months after the United States entered the war, production of civilian automobiles was curtailed leaving many factories idle. Simultaneously government orders for aircraft skyrocketed, and with Grumman soon to begin full-scale production of the F6F Hellcat fighter the decision was made to allocate TBF Avenger manufacturing to the Eastern Aircraft Division of General Motors. Contracts were signed in March 1942 and the first re-designated TBM Avengers rolled off the production line in November of the same year. Thereafter Grumman reduced production of the TBF as GM increased output of TBMs, until by mid-1944 all Avengers were being produced by Eastern.

The TBF design evolved throughout the war, as the Navy took full advantage of the versatility of the aircraft. Radar was an early addition, with TBFs fitted with ASB surface-search sets, and in 1943 radar TBFs were used in conjunction with F6F Hellcats in a night interceptor role. TBFs soon acquired an all-weather, day-night role which saw specialist night torpedo units commissioned. The British were enthusiastic adopters of the Avenger, and eventually received over 1,000 aircraft via Lend-Lease. These saw service in both the Atlantic and Pacific theatres.

The high points of the TBF/TBM’s career occurred in 1944, during the battles of the Philippine Sea and Leyte Gulf. Avengers from VT-24 were solely responsible for the sinking of the carrier Hiyo in June, during the infamous ‘mission beyond darkness’. At Leyte, Avengers played a key role in the sinking of many Japanese warships including the huge battleship Musashi. The following year her sister Yamato was also sent to the bottom. However, the vast majority of Avenger missions were bombing attacks against land targets, as Avengers supported the assaults on Japanese garrisons across the Pacific, as well as dropping tons of ordnance on Japan itself during the final months of the war.