After the attempted raid on Rabaul by Task Force 11 was turned back when the Lexington was spotted by Japanese patrol aircraft, Admiral Wilson Brown retired and considered his next move. He radioed Admiral Nimitz at Pearl Harbor advising that a two-carrier force was the minimum that he believed capable of attacking the port, expecting that it would be quite some time before additional forces could be sent to the South Pacific. However, when reconnaissance of the Central Pacific revealed a paucity of targets, Nimitz decided to send the Yorktown to join Brown instead of Halsey’s Task Force 16. Brown would get another crack at Rabaul far sooner than he expected.

Two days after Halsey and the Enterprise departed for the cruise to Wake and Marcus Islands Task Force 17, centred on the carrier Yorktown, set sail from Pearl Harbor to join the Lexington. After flying patrols near the equator for several days TF17 joined TF11 on March 6th. An attack on Rabaul was ordered to provide some distant cover for a convoy that was soon due to arrive on Noumea with Army troops. However, a move by the Japanese would throw these plans into turmoil.

Air reconnaissance by a Hudson from 32 Squadron, RAAF, had revealed a large Japanese force amassing at Rabaul. In total the Japanese 4th Fleet had assembled three heavy and five light cruisers, eight destroyers, fifteen transports, a seaplane tender, a submarine squadron, and a gunboat squadron, plus the 24th Air Flotilla, in New Britain. An operation was clearly in the offing, and Nimitz, prodded by Admiral King in Washington, was keen to do something to slow the Japanese advance – hence the departure of the Yorktown to join the Lexington. Several bombing raids had been mounted on Port Moresby, Lae, Salamaua and other points on New Guinea, suggesting that was the likely next target. 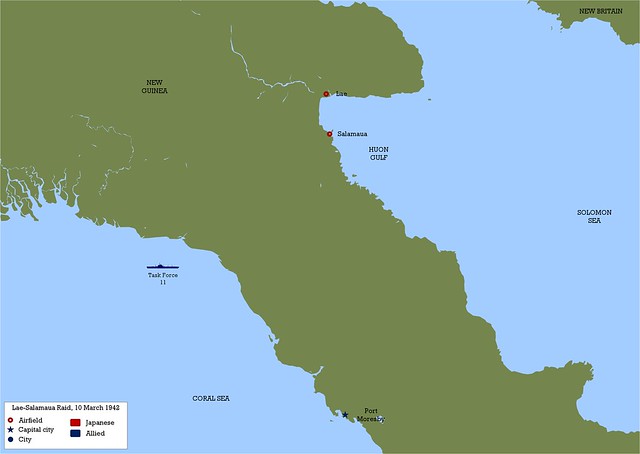 Brown still desired to attack Rabaul, as well as the fighter base at nearby Gasmata, to check this advance. But he was reticent about repeating the attack from the north, believing that Japanese air patrols would make it impossible to approach undetected, as they had on the 20th of February. Therefore, he looked to approach from the south east through the Coral Sea, and deliver a moonlight attack on Rabaul. However, when Task Force 17 joined him on he discovered that the Yorktown Air Group was not trained in night operations, and so modified his plans to strike at dawn instead.

A further spanner was then thrown into the works by the Japanese. Air reconnaissance of Rabaul by an RAAF Catalina on the 7th of March indicated that 23 ships were in Rabaul’s Simpson Harbour. The next day another patrol plane reported that this mass of shipping was no longer present, with just a handful of ships remaining. It was therefore pointless to attack Rabaul, however another aircraft had spotted an invasion force in the Huon Gulf, off New Guinea. The 4th Fleet had landed troops near the mining towns of Lae and Salamaua on March 8th in order to establish a foothold on New Guinea’s northern coast.

Modifying the original plan, Brown’s staff looked to launch a strike from the Gulf of Papua, south of New Guinea, to hit the shipping in the Huon Gulf. This would require the two air groups to fly across the formidable Owen Stanley mountain range, which was poorly charted. SBDs were sent to Townsville in Australia and Port Moresby in New Guinea to gather valuable data about flying conditions in the area. It was found that one mountain pass was low enough for the carrier planes to pass through with their heavy loads of ordnance. The plan was for the Lexington Air Group to attack first, followed by the Yorktown fliers. The two carriers sailed to appoint south of Port Moresby, and the attack began with a dawn launch on March 10th.

The launch was relatively uneventful, and the 104 aircraft in the attack group droned north. VT-2 with their Mark 13s torpedoes, weighing 2,000lbs each, struggled to gain enough altitude to cross the mountains. It looked like the squadron would have to abort before their leader, LtCdr James H. Brett, saw an area of open ground. Remembering his glider training, he used the rising column of warm air from this clearing to lift his aircraft over the pass. The other 12 TBDs followed his lead and made it over the mountains.

Arriving first near Lae and Salamaua, Lexington’s VF-3 found no Japanese aircraft in the area, nor were there any on the airfields near each town – the 24th Air Flotilla was due to move and advanced party of Zeros to Lae airfield but had not yet done so. Therefore, the F4Fs split up to commence attacks on the two airfields, dropping small 30lb bombs and shooting up anything that looked like a worthwhile target, before going on to strafe the warships lying offshore.

The mass of Japanese shipping in the Huon Gulf was the primary target, and the bombers went after the undefended vessels with relish. VS-2 selected a trio of transports unloading off Lae: the Kongo Maru, Tenyo Maru, and Kokai Maru, which were being guarded by the destroyers Yayoi and Mutsuki. The SBDs claimed several hits on the Kongo Maru, which was moored to pier at Lae’s small docks. Other hits were recorded on the Tenyo Maru and Kokai Maru. One SBD was hit by anti-aircraft fire and crashed, its crew perishing. Two of the SBDs went after the Yubari, a cruiser further out in the gulf. Hits were claimed no serious damage was done to the ship. The SBD pilots noted that their bomb sites fogged over during the dives, a phenomena caused by the rapid change in humidity and temperature during the dive from high to low altitude. 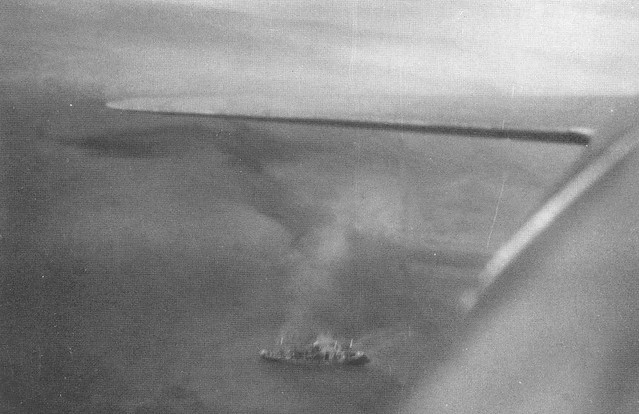 VB-2 and VT-2 attempted to launch a coordinated attack on several ships, but the sheer number of targets made selection difficult and each section attack separately. Six of VB-2’s SBDs, armed with 1,000lb bombs, attacked a ‘cruiser’ which actually turned out to be the large minelayer Tsugaru. A hit and a near miss were claimed. Others went after the China Maru, another transport, and claimed to have hit the depth charge rails of a nearby destroyer. Simultaneously, three of VT-2’s TBDs combined to attack the Yokohama Maru off Salamaua. Two of the torpedoes missed and hit the rocky shore near the ship, but the last fish scored a hit and she settled onto the seabed.

The rest of VT-2, ten TBDs in all, attacked the transports off Lae, but all of their torpedoes missed: some appeared to have run too deep and passed underneath their intended targets, whilst others ran erratically or failed to release from the launching aircraft. Clearly there technical issues with the Mark 13s that prevented them from having their maximum effect. One E8N floatplane that somehow managed to get airborne attempted to intercept the TBDs, but was shot down by a VF-3 fighter. Attacks concluded, the Lexington fliers regrouped and departed, just in time for the Yorktown to make her contribution.

Yorktown’s TBDs from VT-5 were equipped with bombs rather than torpedoes, and this lighter load allowed them to clear the Owen Stanley Mountains with relative ease. VF-42’s Wildcats were in the lead and found, like the colleagues in VF-3, no airborne opposition. Like VF-3, the ten F4Fs then set out to strafe targets of opportunity, as they lacked bomb racks for small munitions. Several small boats, some engaged in rescue operations near the ships hit by the Lexington group, were machine-gunned. VF-42’s commander, LtCdr Oscar Pederson, suffered damage to his fighter’s engine whilst strafing Salamaua airfield and had to nervously coax the ailing machine back over the mountains.

VB-5 concentrated on the cruiser Yubari, which was still manoeuvring despite the attentions of the Lexington Air Group – her executive officer had been killed by a strafing fighter. Attacking in three waves, the Yorktown fliers added to the Yubari’s woes claiming a total of three direct hits and six near misses. In fact the SBDs scored a hit near one of the cruiser’s turrets, igniting powder charges that the crew struggled to extinguish, and the fire threatened to engulf her torpedoes before the crew were able to jettison them. Despite this damage, Yubari survived the attack and limped back to Rabaul, before heading to Truk for repairs. Off Lae, VS-5 attacked the three transports that had already been hit by VS-2.  Dropping both 500lb and 100lb bombs, the SBDs claimed at least three hits to add to the woes of the Kongo Maru and her consorts.

The torpedo bombers of VT-5 remained at high altitude, seeking targets that had escaped the attentions of the earlier attacks. They spotted a pair of ships, one large and one small, approaching from the north. The larger vessel was the seaplane tender Kiyokawa Maru, escorted by the destroyer Mochizuki. Selecting the seaplane tender as their target, the TBDs released their bombs from 13,000ft and scored a hit which caused severe damage, destroying several floatplanes and bringing the vessel to a stop. One of the tender’s E8N seaplanes was airborne and attempted to intercept the TBDs, but was forced to break off with damage under the withering barrage of the bombers defensive fire. This aircraft promptly sank when it landed on the water. The Kiyokawa Maru was forced to return to Japan for extensive repairs. 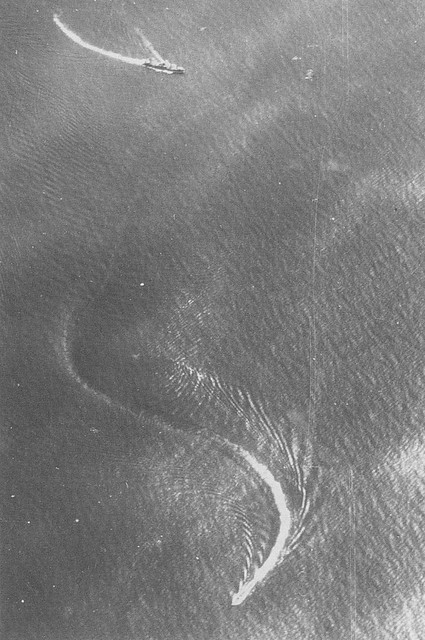 The Yorktown group then followed their Lexington colleagues on the return trip over the Owen Stanley Mountains, which was uneventful. All aircraft except for the single SBD lost by VS-2 were back aboard ship around noon. The carriers then set course to the south east to withdraw. Yokohama Kokutai H6K flying boats were sent out to search for the Americans, and at least one of these aircraft was spotted by the Yorktown’s CXAM radar. Fortunately an attack was not forthcoming, and the task force was able to withdraw unmolested.

The Navy’s attack was followed up by a raid by the 5th Air Force, as the Far East Air Force had been renamed following its withdrawal to Australia. Eight B-17s from the 19th Bomb Group passed close to the carriers on their way north, before they attacked the Japanese shipping in the Huon Gulf. The B-17s claimed damage to one of the transports, and a near miss on a destroyer, before withdrawing without loss.

During their debriefs, the Navy pilots claimed to have inflicted heavy damage on the Japanese flotilla. A total of five transports, three cruisers and a destroyer were claimed sunk, with damage to several other ships. In fact the damage was much less extensive than claimed – the transports Kongo Maru, Tenyo Maru and Yokohama Maru were all sunk, and the transport Kokai Maru suffered heavy damage, in addition to that inflicted on the Kiyokawa Maru and Yubari. A total of 130 men were killed. Still, the raid was the most serious setback that the Japanese Navy had experienced to this point in the war. The losses forced the postponement of the planned invasions of Port Moresby and Tulagi by a month, whilst the 4th Fleet waited for ships to be repaired and for additional reinforcements – including carriers – to be dispatched to the South Seas. Moves were in the making that would culminate in the first climactic battle between the Japanese and US navies.

In Defence of the Lexington

The Battle of Midway: Yorktown Succumbs