Whilst the Pacific War was in its opening weeks, the war in China was also continuing. In Chungking, the irrepressible former US Army pilot, Claire Lee Chennault, was preparing to throw into battle his newly created air force of foreign volunteers. Chennault had been requesting the creation of a new flying unit to augment the battered Republic of China Air Force, which by mid-1941 had almost ceased to exist. The Soviet Volunteer Group had fully withdrawn from China following the signing of the Soviet-Japanese Non-Aggression Pact in April 1941, and the handful of Western mercenaries who had been involved in the fighting over Chungking were too small in number and too erratic in temperament to be used as the nucleus of a new Chinese Air Force. Therefore, Chinese lobbyists began to pressure President Roosevelt to allow Chennault to recruit pilots from the ranks of the American military. In April 1941, Roosevelt allowed the creation of a volunteer unit to be sent to China.

Initially the plan was to create a force of three combat groups, the first being a fighter unit. Chennault’s recruiters were given permission to visit Army, Navy and Marine air bases in an attempt to recruit pilots to join the 1st American Volunteer Group. Pilots were offered very high wages for the time, with generous bonuses for each enemy aircraft confirmed shot down. Any pilot agreeing to sign up was given an honourable discharge from their service arm, with the expectation that they would be allowed to re-enlist at the end of their service in China with no repercussions. The 1st AVG eventually recruited 100 pilots and 200 ground crew, and procured 100 Curtiss P-40B Warhawk fighters from an RAF order that had lapsed. The planes and pilots were shipped to Burma, there to make their way overland to China.

The AVG was initially to be based in southern China and Burma, in order to protect Chiang Kai-Shek’s supply route – the Burma Road. At the time of Pearl Harbor the ‘Flying Tigers’, as they would become known thanks to the large rows of teeth painted on the noses of their P-40s, were just completing their preparations and training prior to going into action against the Japanese. Contrary to the beliefs of some, the AVG did not go into action before the 7th of December. The outbreak of war would find the 3rd Pursuit Squadron, commanded by ex-USAAF fighter pilot Arvid Olson, at Mingaladon, near the Burmese capital of Rangoon, and the 1st and 2nd Squadrons at Kunming in southern China. 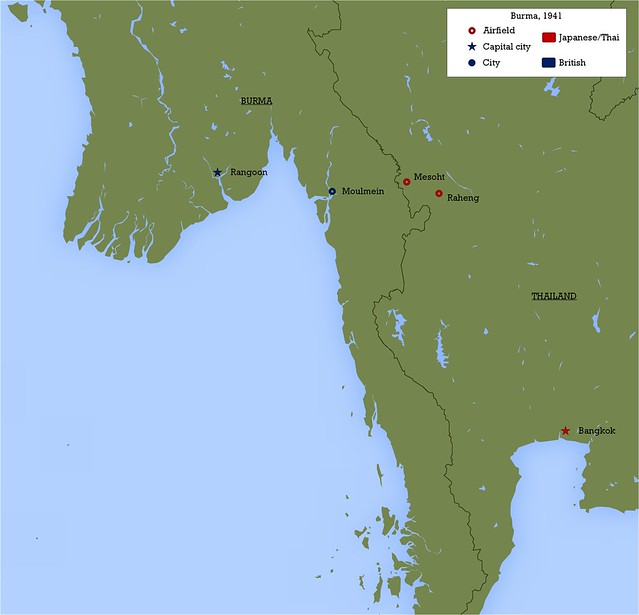 Also in Burma was the RAF’s 67 Squadron, which had recently transferred from Singapore to Mingaladon. They had originally arrived in the Far East with Brewster Buffalo fighters, but these had been left behind in Singapore and replacement Buffalos had only just arrived in Burma – many were still in crates awaiting assembly when the war began. 67 Squadron was commanded by Squadron Leader Bob Milward, a veteran of the fighting in the Middle East. At Mingaladon 67 Squadron joined 60 Squadron, a Bristol Blenheim outfit that was likewise waiting for its full complement of aircraft to be delivered. A handful of miscellaneous auxiliary aircraft belong to the RAF and the Indian Air Force were also present, but otherwise Burma was a backwater in terms of Allied air power.

Initially the Japanese concentrated on moving south in to Malaya, and so little attention was paid to the British in Burma. Limited air attacks were made on the airfield at Victoria Point in the extreme south, which were followed up with a ground offensive that captured the base on the 16th of December. With the RAF and AVG concentrating on the defence of Rangoon, there was no opposition to the Japanese in the air. The IJAAF moved the Ki-21s of the 7th Hikodan, comprising the 60th, 62nd and 98th Sentai, into position for the invasion of Burma, supported by the light Ki-30s of the 31st Sentai and the Ki-27s of the 77th. These units all belonged to General Michio Sugawara’s 3rd Hikoshidan, which had overall responsibility for air operations over Burma and Malaya.

The Flying Tigers in Action

The first heavy attack in Burma came on the 23rd of December. Japanese reconnaissance aircraft had spotted dozens of planes on the ground at airfields around Rangoon, and so the bomber forces were briefed to launch a massive attack. All four bomber Sentai would take part, covered by the 77th’s fighters. Half the bombers would hit the docks of Rangoon, whilst the rest attacked Mingaladon airfield. The British warning network gave enough notice of the incoming raid for 67 Squadron and the 3rd Pursuit to get 27 fighters airborne and up to altitude. What followed was the biggest dogfight of the Pacific War to date. 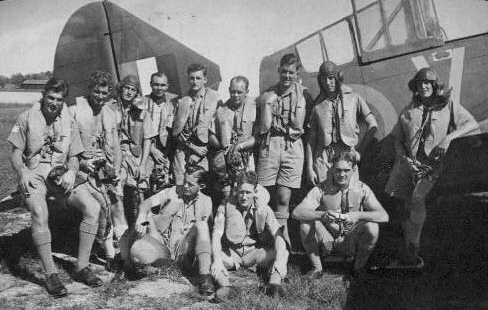 The first attacks by 67 Squadron drew the escorting Ki-27s away, allowing others to face the bombers. Sgt Williams quickly claimed a Ki-21, plus another probable and several more damaged whilst his wingman Sgt Bargh claimed a Ki-27, before returning to the bomber formation and adding a Ki-21. Flight Officer Lambert then added a final Ki-21 for the British Buffalos.

The 3rd Pursuit, in their faster P-40s, had more success. In two groups the 3rd dived into the attack, with Flight Leader Charles Older claiming the lead bomber shot down for the 3rd’s first victory, which was quickly followed by several more bombers claimed by his wingmen. The escorts responded by shooting down and killing Henry J. Gilbert, the first AVG pilot to lose his life in action.

In total 67 Squadron claimed 3 bombers and a fighter, whilst the 3rd Pursuit claimed 10 bombers and another fighter. Another bomber was claimed by the gunners of the American freighter City of Tulsa, moored in Rangoon harbour. Actually just 7 Ki-21s were lost, although many more were damaged. Five of these losses were sustained by the 62nd Sentai, which had led the attack on Mingaladon. The 98th Sentai’s commander, Colonel Usui Shigeki, was killed by machine gun fire in his co-pilot’s seat. The 77th Sentai, mistaking the P-40s for Spitfires, claimed seven plus a pair of Buffalos in return. Several more Buffalos were destroyed on the ground by bombs. Rangoon itself took heavy punishment, the bombing of the docks and surrounding areas claiming around 1,000 lives amongst the civilian population. Hundreds of dock workers fled, causing paralysis in unloading operations and preventing vital war supplies getting ashore.

Both sides licked their wounds and buried their dead on Christmas Eve. Reconnaissance flights had indicated that the Allies still had a significant number of aircraft at Mingaladon. Re-evaluating the strength of the Allied air defences, the Japanese decided to transfer the crack 64th Sentai under Major Tateo Kato from Malaya to Bangkok to escort the next raid. The 64th flew the newer, faster Ki-43 Hayabusa fighter that would prove a better match for the American P-40s. A new attack was planned for Christmas Day, a heavy attack on Mingaladon designed to destroy the Allied fighter base.

Mingaladon’s operations room had been destroyed during the previous raid, so the response to the new attack was fragmented. Three AVG P-40s on patrol spotted the incoming bombers, and these were quickly joined by three more P-40s that had scrambled from the airfield. They went after the bombers as they headed for Rangoon, cutting through the formation and claiming no less than 10 of the Ki-21s shot down. Although actual losses were lower, the formation was now badly scattered. The Americans soon spotted another Sentai of bombers with a few fighters as escort, and moved into position to attack these. FltLdr Hedman claimed another bomber and a ‘Zero’, to bring his tally for the day to 5 – becoming the first American ‘ace in a day’. Other P-40s fell upon the bombers as they attacked Mingaladon, with one pilot claiming to have shot down a Messerschmitt 109 – an early example of the mistaken belief that the Japanese employed German aircraft in their inventory. 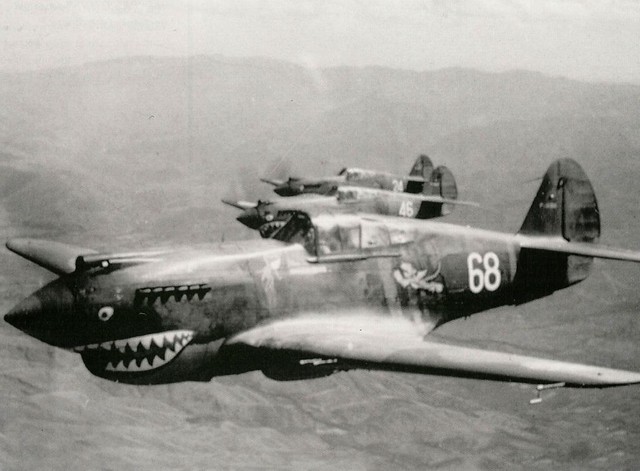 12 British Buffalos from 67 Squadron also got airborne and they encountered the Japanese bombers after they had completed their raids on Rangoon. They quickly claimed one of the bombers, but were then attacked by the escorting 64th Sentai’s Ki-43s. One Buffalo was immediately shot down and was seen to crash in flames, with the pilot Sgt John MacPherson killed. Further attacks then followed on the remaining Buffalos, with 67 paying a heavy price – one section of three fighters was attacked by the Ki-43s and all three were shot down, with pilots Flight Officer J.F. Lambert and Sergeants Ted Hewitt and Ron McNabb all killed. The British pilots suffered from a lack of pilot armour which had not been fitted to their hastily rebuilt machines.

In the end the AVG claimed a total of 24 kills, whilst 67 Squadron added 4 more. Actual losses were much lower, with three Ki-21s, a pair of Ki-43s and a pair of Ki-27s failing to return to the airfields in Thailand. Two P-40s and four Buffalos had been destroyed in air combat. Eight more Buffalos had been destroyed on ground at Mingaladon by the Japanese bombers, and several AA emplacements were also destroyed by direct hits. Rangoon again suffered terribly, with 5,000 civilians being killed during the Christmas Day raid. Air raid shelters were almost non-existent and the population suffered accordingly, contributing to a general sense of panic that threatened to completely undermine law and order in the city.

After the attack, Squadron Leader Olsen requested that his 3rd Pursuit Squadron be withdrawn due to the heavy losses that it had sustained beating back the Japanese attacks. It was pulled back to Kunming for rest and recovery, but it was replaced at Mingaladon by the 2nd Pursuit Squadron under SqLdr Jack Newkirk, a former naval aviator. The Buffalos of 67 Squadron, meanwhile, were moved to a satellite airfield 40 miles north of Rangoon in order to keep them safe from further attacks.

The Japanese considered the two attacks to have been highly successful, and with the western flank secured resumed their attacks on Malaya and Singapore. Burma was kept subdued by a number of harassing night attacks by small groups of bombers, and strafing attacks by Ki-27s of the 77th Sentai. In an attack on Moulmein on the 3rd of January, the 77th destroyed four ancient Westland Wapiti and Hawker Audax bombers on the ground. Upon their return to Raheng airfield in Thailand, the Ki-27s were attacked by a trio of Flying Tigers led by Newkirk. They claimed three of the Type 97s destroyed in the air and four more burned on the ground.

With the 64th Sentai back operating over Malaya, it was left to the 77th Sentai and their old Ki-27 fighters to handle Burma. Whilst small groups of bombers hit Rangoon at night, the 77th flew fighter sweeps aimed at destroying the Flying Tigers and the RAF in the air. On 4th of January they encountered a trio of patrolling P-40s, shooting two down, but otherwise the Japanese had to content themselves with destroying the occasional grounded aircraft. To return the favour, the Allied fighter forces continued to attack Raheng and Mesoht airfields, shooting up the Japanese on the ground wherever possible.

This uneasy situation continued through January, as the Japanese marshalled their forces and prepared for the ground invasion of Burma. Both sides began to build up their air forces in expectation of the upcoming offensive – the RAF flew in an additional unit of Blenheim bombers, 113 Squadron, and awaited the arrival of an entire wing – three squadrons – of Hurricane fighters. The Japanese had to wait until they had sufficiently reduced the air defences of Singapore before they could transfer units north to Burma, but by the end of January the fall of that city was becoming increasingly inevitable.

The Fall of Burma