After the fall of Rangoon in early March 1942, the remaining RAF and AVG aircraft withdrew to Magwe airfield in central Burma, from where they hoped to give what air cover they could to the retreating army. Japanese ground troops, now with a secure foothold in the south of the country continued their push north and west. Civilians across the country, many of them Indians brought in by the British, fled before the advancing Japanese. Spaces on the few airworthy transport craft were at a premium, and a black market for ‘tickets’ aboard them quickly sprang up.

The RAF contingent in Burma was by this time split between two wings – Burwing at Magwe, with 16 Hurricanes and 9 Blenheims, and Akwing at Akyab with 10 Hurricanes, 6 Hudsons and 2 Blenheims. Most of the less capable aircraft, such as 67 Squadron’s Buffaloes, had been withdrawn to India, it being realised that these were useless against the Japanese Ki-43s. Several old transport aircraft were engaged in ferrying supplies in to Magwe and Akyab, and carrying RAF ground staff and a few lucky civilians to the relative safety of India. 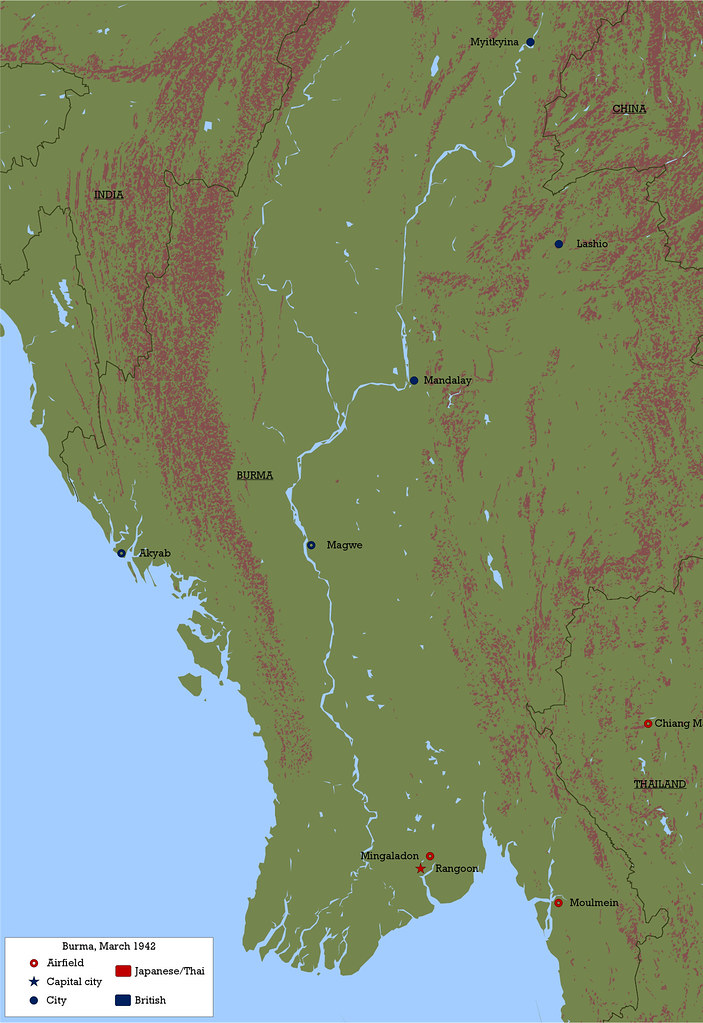 American aircraft were also starting to trickle into Burma. The Tenth Air Force was established, commanded by MajGen Lewis H. Brereton. He had led the Far East Air Force in the Philippines before its withdrawal to Java and Australia. The first American unit to arrive was the 7th Bomb Group, which had been re-directed from its original posting to the now defunct FEAF. The 7th was initially equipped with just eight B-17s and an LB-30, plus a few C-47 transports for logistical support. These were initially used to ferry troops into Magwe.

The US was meanwhile required to provide logistical support to the Chinese now that the Burma Road had been closed by the capture of Rangoon. The only way that Brereton could supply Chiang Kai-Shek was to fly cargo over the formidable Himalayas to the hub city of Kunming. This formidable task was made all the more difficult by a severe lack of aircraft with which to carry the cargo. When a squadron of light bombers promised to Chiang was instead diverted to the imperilled Western Desert, the Chinese reacted furiously and managed to extract from FDR a promise that 500 combat aircraft and 100 transports would be assigned to the Tenth.

With the RAF desperately short of aircraft, two pilots volunteered to undertake a dangerous mission to retrieve grounded Hurricanes at Mingaladon on the 7th of March. These aircraft were not considered fit for combat, hence why they were not evacuated, but it was thought that they might be sufficiently airworthy to make the flight to Magwe. Two Lysanders from 1 Squadron, Indian Air Force, were used to ferry pilots back to Mingaladon, which had not yet been occupied by Japanese troops. Three Hurricanes were still parked on the aerodrome, intact, and they were soon prepared for flight. The Lysanders meanwhile picked up two RAF personnel who had been left behind in Rangoon. All five aircraft managed to successfully make their way back to safety at Akyab, from under the noses of the Japanese Army Air Force. Mingaladon and its satellite fields were soon occupied by the 5th Air Division.

There was a brief lull whilst the Japanese completed the occupation of their new forward bases, brought forward reinforcements and rotated tired crews home. The veteran 12th and 98th Sentai, both fresh from the campaign to capture Singapore, moved to bases in Siam with their Ki-21 bombers. They joined five fighter sentai and three other bomber sentai, all of which were making preparations for a renewed effort in central Burma. Allied fighters carried out harassing attacks on Japanese airfields which slightly hampered these efforts, but did little to swing the balance of power in the skies of Burma.

On the 20th of March, 1942, with Rangoon now safely in Japanese hands, a reconnaissance Hurricane made a flight over Mingaladon and discovered 50 Japanese aircraft on the field. Burwing commander GrpCapt Broughall decided that an early morning raid by all of his Hurricanes and Blenheims should be launched. On the morning of the 21st the 10 Hurricanes assigned arrived over Rangoon to find no sign of the bombers. After waiting as long as they dared, the fighters elected to dive in for a strafing attack. The high-speed attack caught the Japanese unawares, and before long 11 aircraft were burning on the field. The nine Blenheims meanwhile had been delayed, and then intercepted by 18 Ki-27s which damaged most of the bombers. Nevertheless all of them managed to reach Mingaladon and dump their bombs, before returning home. The raid was considered an enormous success, but before it could be capitalised upon the Japanese struck back. 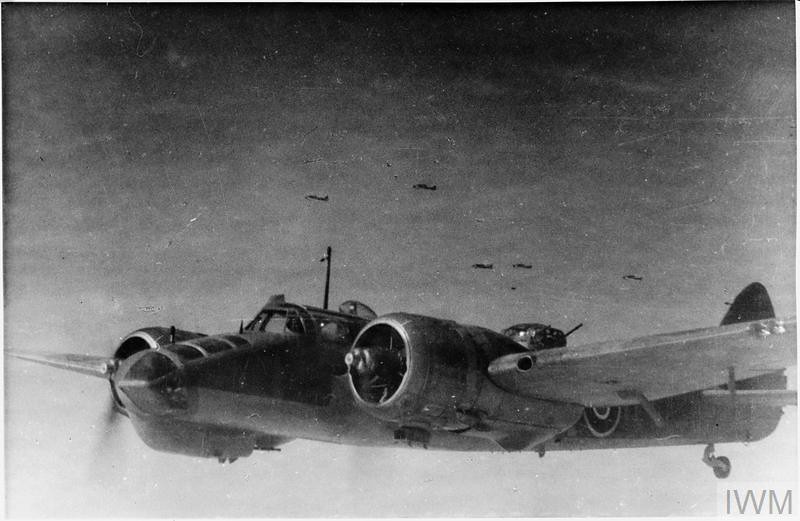 RAF Blenheim in flight over Burma

Their target was Magwe, the main base of Burwing. In the early afternoon of the 21st 31 Ki-27s arrived to patrol over Magwe. They were soon followed by 52 Ki-21 bombers which plastered the field and caused much damage to the aerodrome’s facilities. Several Hurricanes and AVG P-40s clawed their way into the air and attempted to get past the escorts to engage the bombers. The RAF thought they had destroyed three fighters, and the AVG two more. However, half a dozen Hurricanes were destroyed by the bombing, leaving Burwing with just three serviceable machines. The Japanese returned the following day with two more large air raids, making it clear that Magwe was no longer tenable as a base. The remaining AVG fighters pulled out for Loiwing in northern Burma, whilst the RAF fled to Akyab to join Akwing.

Any sense of safety that the move may have provided was short lived. The very next day, Akyab was raided by 26 Ki-21s in the company of the 64th Sentai’s Ki-43 fighters. Hurricanes claimed two Ki-21s shot down, but the veteran 64th intervened to shoot down three of the interceptors. As at Magwe, the airfield facilities were heavily damaged and the air unit devastated. Soon the order was given to evacuate from Akyab as well, with the remaining RAF aircraft pulled back to India.

In attempt to do something to stem the tide of the Japanese advance, aircraft from the 1st and 2nd Squadrons of the AVG set out for Chiangmai to strafe the airfield hosting the 12th and 98th Sentai. The operation began to come apart from the start, when the two squadrons failed to rendezvous before heading to the target. Instead, the P-40s set out in two groups. Five from the 1st Squadron, including future Marine Corps ace Gregory Boyington, claimed to have burned 13 aircraft on the ground, most of them bombers. One of the P-40s was hit by anti-aircraft fire and had to crash land – the pilot evaded capture for 28 days before being captured by the Thai police. Worse luck was to befall the 2nd Squadron, which lost SqLdr Jack Newkirk to a direct hit – his P-40 crashed in flames, and Newkirk did not survive. The damage done to the airfield was not sufficient to close it, as 53 Ki-21s set out later the same day to raid Akyab. 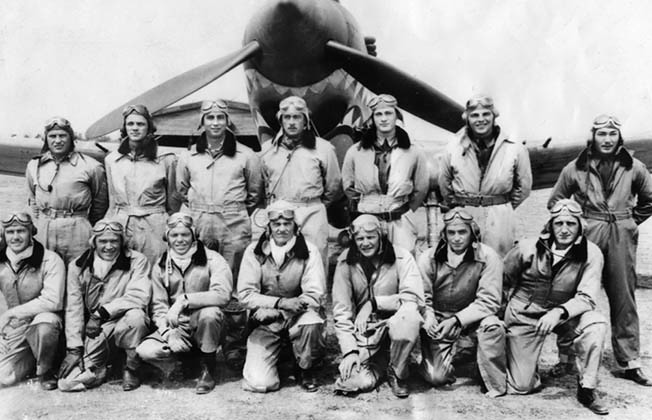 Now largely free from interference by the Allied air forces, the Japanese mounted a series of raids on Mandalay in central Burma beginning on the 3rd of April. 60% of the houses in the town were burnt out, and many hundreds of Burmese were killed. Mandalay was severely damaged and tens of thousands of civilians, many of them Indians, began fleeing for the border. A counter raid on Rangoon by the American 7th Bomb Group was pitiful in comparison, with the six B-17s despatched causing little damage. One of the bombers failed to return.

Japanese attention now turned to Lashio, a small town in the north of Burma on the main route to China to where the AVG and a small group of RAF Hurricanes had withdrawn. The 64th Sentai initiated a series of raids intended to thin out the fighter defences of the town by bringing the P-40s into combat. The first of these raids, launched on the 8th of April, proved to be a disaster – the eight Ki-43s that set out to strafe Loiwing airfield were bounced by 11 AVG P-40s, which had been given prior warning of the raid thanks to a British radar set. Four of the Nakajimas were shot down. A repeat attempt the following days were more successful, with the Japanese more often than not able to evade detection and hit the Allied air forces on the ground.

Meanwhile the RAF’s Burwing attempted to reassemble at Loiwing, so that it could offer at least some support to the retreating army. The unit’s Blenheim bombers were staged in from Asansol in India, Loiwing being deemed too vulnerable to the marauding Japanese fighters. 113 Squadron carried out several bombing attacks, focussing on Japanese river craft and road traffic. Their efforts were in vain, as by late April it was clear that Lashio was about to fall to the advancing Japanese. An attempt to take Lashio by parachute assault was planned, and the aircraft had taken off loaded with paratroopers before the attempt was cancelled due to bad weather. Lashio airfield was abandoned nevertheless. Burwing initiated a withdrawal to India, where they would seek to defend the frontiers against any renewed invasion. They were joined by 215 Squadron, the first unit to bring the Vickers Wellington medium bomber to the Far East.

The AVG also abandoned Loiwing, leaving behind no less than 22 unserviceable P-40s that were set alight to deny them to the enemy. The Americans fled to Kunming in China, from where they would provide what support they could to a Chinese ary operating in Northern Burma. The AVG was also making preparations to re-join the US armed forces, with Claire Chennault accepting a commission into the USAAF as a colonel and the whole outfit slated to be re-designated the 23rd Fighter Group and absorbed into the Tenth Air Force. Attacks were made on the new AVG bas at Paoshan in China, as the Japanese pushed north and attempted to invade. 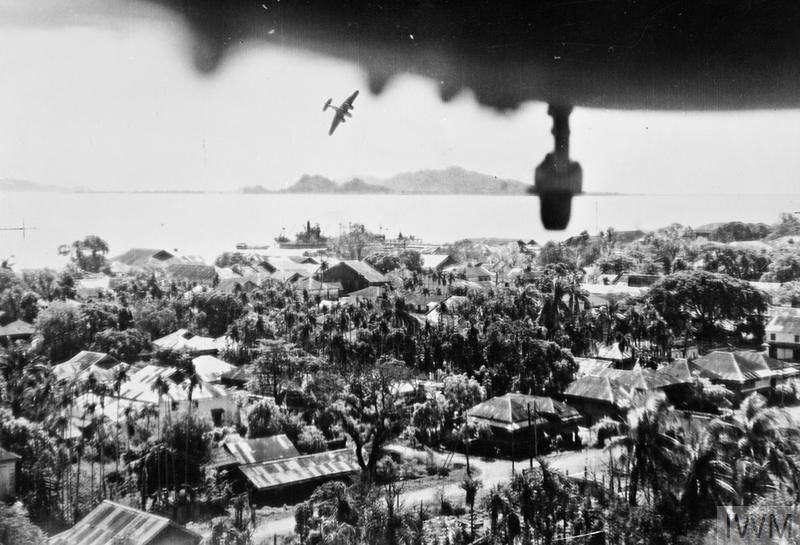 113 Squadron Blenheim shot down over Akyab

Burma was by now almost completely in Japanese hands. Fighting would continue in the north of the country, particularly around the town of Myitkyina, for the rest of the month. The Allied air forces had to content themselves with harassing raids on far-flung targets. The AVG reconnoitred Hanoi in French Indochina, an effort followed up by raid conducted by a ‘bomber’ – a C-47 loaded with American, Chinese and even Russian bombs which had to be armed and pushed out of the aircraft by hand. The RAF likewise carried out small bombing raids on their former bases across Burma. On the 22nd of May a single Blenheim attacked Akyab, but was intercepted by Ki-43s of the 64th Sentai. One Ki-43 was shot down by return fire, killing the celebrated IJAAF ace LtCol Tateo Kato.

The Flying Tigers In Defence of Rangoon