After Rabaul had been captured by the Japanese, Australian forces attempted to consolidate positions on the south coast of New Guinea, particularly at the capital of Port Moresby. With the most skilled and experienced Australian pilots still fighting in Europe and North Africa, the Australian government scrambled to find additional forces to send north. With American forces still making their way across the Pacific, for the time being it was up to the Royal Australian Air Force to stand alone in the defence of Port Moresby.

Existing RAAF strength at Port Moresby was pitiful. Portions of two flying boat squadrons, numbers 11 and 20 Squadron with 6 Catalinas total, and 24 Squadron, a survivor of the Japanese assault on Rabaul that had regrouped at Port Moresby with just 7 Lockheed Hudson medium bombers, comprised the total force available for the defence of the city. This small force was required to not only patrol the approaches to New Guinea to provide early warning of approaching Japanese forces, but also to carry out harassing raids on Rabaul and other enemy positions. 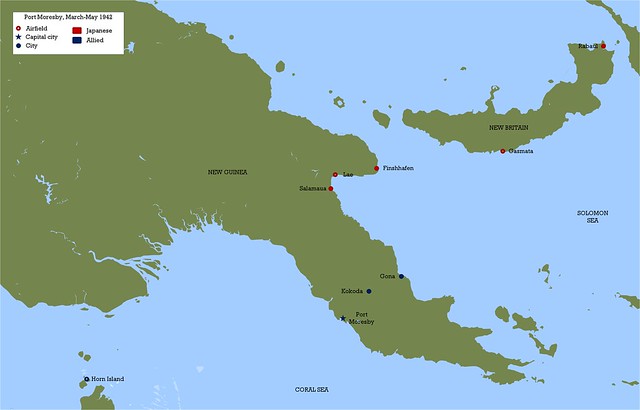 With the fall of Rabaul, Port Moresby was within range of Japanese bombers based there. The first raid occurred on the night of the 28th/29th of January, 1942, when H6K Type 97 flying boats from the Yokohama Kokutai appeared over the town in the early hours to carry out a harassing raid. This was followed up on the 2nd of February by an attack during which the Yokohama Ku was joined by 10 of the Chitose Ku’s G3M bombers. With no fighters available, the sole defence was in the form of the anti-aircraft batteries that protected the port and airfield facilities. Damage was on this occasion very light. Initially these raids were unescorted, but soon the Japanese captured Gasmata on the south coast of New Britain, followed a month later by the capture of Lae. Zeros were soon flown into these airfields, from which they could reach not only Port Moresby but also the northern coast of Australia itself.

The small RAAF bomber force did its best to make life difficult for the Japanese. On the night of the 3rd/4th of February, five Catalinas set out for a harassing raid on Rabaul. Chitose Ku A5M fighters attempted a night interception and succeeded in badly damaging one of the flying boats, which was forced to land at Salamaua to make emergency repairs, before returning to Port Moresby a day late. On the 6th, a Hudson was badly damaged on a reconnaissance flight to Rabaul, and had to fly 500 miles back to Port Moresby with three badly wounded crew. For two days starting on the 9th, Hudsons and Catalinas attacked shipping off Gasmata, where the Japanese had just landed. During the second day two Hudsons were shot down by fighters, with 24 Squadron’s skipper SqLdr John Lerew the only survivor – it took him nine days to return to Port Moresby, after he received help from coast watchers.

The first American assistance arrived in the form of the 14th Reconnaissance Squadron, detached from the Hawaiian Air Force specifically to bolster the Australian end of the Hawaii-Australia aerial ferry route. Their first mission was to have been against Rabaul to coincide with the US Navy’s attack on the 21st of February, but when this operation was cancelled the raid was delayed two days. Only five of the assigned nine B-17s made it through abysmal weather to drop bombs on shipping in Simpson Harbour, with indeterminate results. 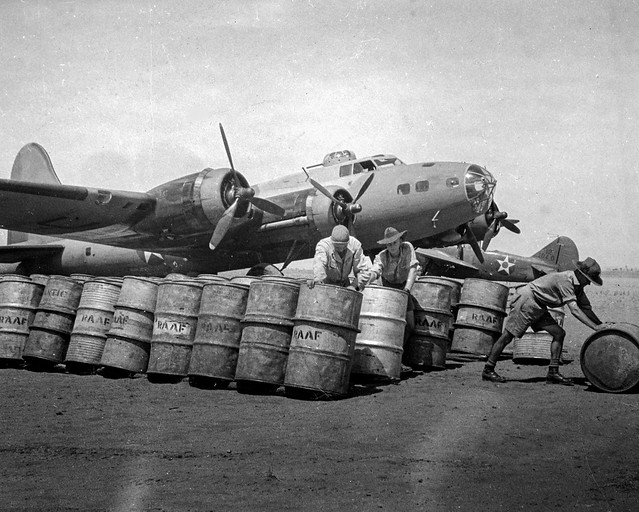 The Japanese were also bringing additional bomber forces into the area as the Chitose Kokutai moved more aircraft to Rabaul, where it was joined by the new 4th Kokutai. The 4th was almost wiped out attacking the Lexington, and as a result the 1st Kokutai was transferred from operations in the Indies to reinforce. After a lull the first raid on Port Moresby by this force occurred on the 28th of February, the seaplane base being badly hit with three Catalinas destroyed. The Australians did their best to hit back with what remained of their bombers, mounting a many reconnaissance and harassment missions as they could. It was during a series of these flights that the impending landings at Lae and Salamaua were discovered, resulting in the attack of the 10th of March. The 24th Air Flotilla bomber force launched several raids in support of these landings.

The Allied response to the landings at Lae prompted the Japanese to more aggressively challenge the supply routes to Port Moresby. Flying from the newly captured airfield at Lae, A6M Zeros from the 4th Kokutai’s fighter unit flew to attack Horn Island on the 14th of March in support of a bombing raid. They were challenged by P-40s of the 49th Fighter Group, which were temporarily stationed there whilst transiting to Darwin.

With the Australian situation at Port Moresby looking bleak, the government in Canberra scrambled to find reinforcements to help the garrison. The first batch of P-40 ‘Kittyhawks’ from a large order had arrived at Brisbane, and these were hurriedly assigned to three newly formed squadrons for the defence of New Guinea. Veteran pilots recently returned from the Mediterranean were assigned to lead pilots fresh out of training school as part of 75 Squadron, and the new squadron was given just a few days to familiarise itself with the Curtiss fighter before it was rushed to 7 Mile airfield, the first echelon arriving on the 21st of March. So surprised were the defenders to see the aircraft (which they had derisively nicknamed ‘Tomorrowhawks’ or ‘Neverhawks’) that anti-aircraft crews assumed they were Japanese, and damaged three fighters before they could land. 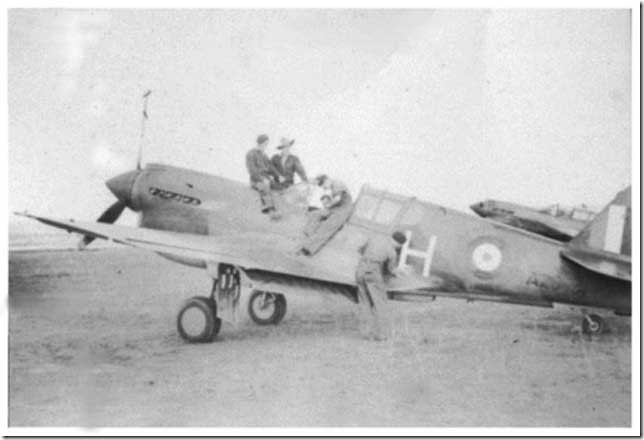 Two pilots were immediately ordered into the air to intercept the daily reconnaissance flight from Lae, and the subsequent destruction of a G4M gave the garrison an enormous lift. The very next day, Flight Lieutenant John Jackson, commander of 75 Squadron, led nine of his fighters over the Owen Stanley Mountains in a strafing attack on Lae airfield. Several fighters and bombers were burned on the ground but patrolling Zeros shot down two of the Kittyhawks, with one of the pilots forced to make a month-long trek across New Guinea before he arrived back at Port Moresby.

Realising that the game had changed with the arrival of Australian fighters, the Japanese redoubled their efforts to destroy Port Moresby’s airfields. 19 bombers, the largest raid on the town yet, were sent to attack from high altitude, where the Kittyhawks struggled to meet them due to their lack of supercharged engines. The escorting Zeros were able to attack 75 Squadron with altitude advantage, forcing the Australians to dive away or face destruction. They then strafed 7 Mile, destroying or damaging several Kittyhawks in exchange for one Zero shot down by a ground fire. Other raids occurred over the next few days, with similar results. In just a few days of fighting 75 Squadron had lost 7 out of 17 fighters, and thought was given to withdrawing the inexperienced unit. Further raids over the next few days resulted in less damage, but wore down the defenders still further.

The Japanese began to re-organise their air units prior to the beginning of their second phase offensives. The air units were exhausted following months of activity, and maintenance schedules had fallen by the wayside to the extent that many aircraft were unflyable. There was an inevitable lull in operations as repairs were made and reinforcements brought in. The newly formed 25th Air Flotilla joined the 24th at Rabaul, with five kokutai between them – including the veteran Tainan Ku, which had transferred from the Netherlands East Indies. This force was assembled to win control of the air before the major effort to capture Port Moresby began in May. On the Allied side, American bombers were arriving in Northern Australia in growing numbers, with B-26 Marauders of the 22nd Bomb Group arriving Archerfield in some force and the 19th Bomb Group regrouping nearby following its experiences in Java. In between these two forces was the battered 75 Squadron at 7 Mile.

Of more immediate interest to the troops at Port Moresby was the arrival of the 3rd Bomb Group’s 8th Bomb Squadron with a few A-24 Banshee bombers. These attacked Salamaua airfield on the 1st of April, planting 500lb bombs on the runway. The Americans even began something of a counter offensive, launching simultaneous raids on Gasmata (by B-25s in their first combat) and Rabaul (by B-17s and 22nd Bomb Group B-26s, also in their first combat) on the 6th of April. One B-26 was lost when it ditched with battle damage, but the crew was recovered by an RAAF Catalina. 75 Squadron returned to Lae a few days later and burned more aircraft on the ground – no protective revetments were available for the Japanese.

American bombers continued raids on Rabaul, in small numbers – half a dozen B-26s, 1 or 2 B-17s at a time. In another first, a squadron of photo-reconnaissance F-4 Lightnings (converted Lockheed P-38s) began operations to keep track of Japanese forces. Success was modest, with the B-26s striking airfields from low level and claiming many aircraft destroyed on the ground. The Marauders also spotted, but failed to sink, the escort carrier Kasuga Maru as it delivered aircraft to Rabaul. On April 18th success was finally achieved when the 22nd Bomb Group managed to sink the transport Komaki Maru just after it unloaded pilots and aircraft from the Tainan Kokutai. This was the first Japanese ship to be sunk in Simpson Harbour.

This American aggression prompted the Japanese to renew their efforts against Port Moresby. With the 1st, 4th and Tainan Kokutai now approaching full strength, plans were laid to prepare the ground for the anticipated invasion of the town planned for early May. On the 21st of April bombers returned to plaster Port Moresby, escorted by Zeros using a new tactic – half the fighters would act as direct escort, whilst the other half would attempt to attack 75 Squadron’s Kittyhawks as they landed following the raid. Three Kittyhawks were lost. During the last 12 days of April a total of 10 raids were mounted against Port Moresby, stretching the defenders to the limit. Aside from the damage done by bombs, strafing Zeros destroyed many aircraft on the ground. 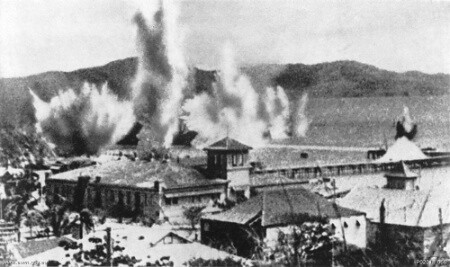 75 Squadron suffered its blackest day on the 28th of April. The unit had just five Kittyhawks still serviceable, and these rose to challenge the daily raid. Just as they reached the altitude of the incoming G4Ms, escorting Zeros fell on the vulnerable fighters and opened fire on three of them. One was damaged but managed to pull away and return to 7 Mile, the pilot wounded. The other two, one piloted by FL John Jackson, were both shot down with the pilots killed. 75 Squadron had lost its leader, and the unit was shattered with no flyable Kittyhawks remaining. It was withdrawn a few days later, having lost 22 aircraft and 12 pilots killed in 44 days of operations. 26 P-39 Airacobras from the 8th Pursuit Group led by newly promoted LtCol Boyd Wagner, a Philippines veteran and the first USAAF ‘ace’ of the war, arrived to take over the defence of the town. On their first mission the P-39s claimed four Zeros shot down but lost four Airacobras in return.

The reinforcements arrived just in time. American intelligence had analysed Japanese radio traffic and determined that the ‘MO’ Operation to capture Port Moresby was about to be launched. B-26s launched additional raids on Rabaul, hoping to reduce the usefulness of that base during the upcoming battle, but they failed to cause much damage and lost another Marauder in the effort. It would fall to the Navy to make the major effort to forestall the offensive, and in Pearl Harbor Admiral Nimitz had already gathered his powerful carrier forces in the South Pacific especially fr the purposes of blunting the Japanese attack. The stage was set for the first climactic carrier battle of the war, in a place west of New Guinea called the Coral Sea.

In Defence of the Lexington