With Sumatra having fallen, British squadrons regrouped in western Java. The collection of fighter squadrons that had seen action in Malaya and Sumatra were re-organised – most were disbanded, and all remaining pilots and aircraft were transferred to 242 and 605 Squadrons, both equipped with Hurricanes. The bomber squadrons were likewise consolidated, with the Blenheim-equipped 84 and 211 Squadrons joined by 62 Squadron’s remaining Hudsons. A handful of Vildebeests also remained to equip the remnants of a combined 36/100 Squadron. These aircraft joined the Dutch squadrons in the west, whilst the Americans with the 17th Provisional Pursuit Squadron largely assumed responsibility for eastern Java.

The Japanese 21st and 23rd Air Flotillas, based on Borneo and Celebes, concentrated on Eastern Java, whilst the 22nd Air Flotilla was beginning to move its forces to Sumatra and southern Borneo where it would join the bomber units of the IJAAF’s 3rd Flying Division in attacking Western Java.

The ADBA forces attempted to assert some control on the situation, launching raids from Java against the build-up of Japanese air and surface off Sumatra. On the 16th of February the first of a series of missions were launched against the Japanese, when half a dozen 139WH bombers set out to attack the airfield at P.1 and shipping in the nearby Moesi River, escorted by Buffalos. The seaplane tender Kamikawa Maru was in the area and her F1M fighters attempted to intercept, and managed to shoot down one of the Glenn Martins. The attack was repeated again the next day, with similar results – a bomber was lost. Finally eight American P-40s were sent west to make an attack – these fighters dumped their bombs when they encountered Ki-27 fighters and went on the attack – one of the Nakajima fighters being dispatched in flames.

The presence of the IJAAF fighters demonstrated that a movement of army aircraft to P.1 and P.2 had begun. The 1st and 11th Sentai, both with Ki-27s, had moved up to Palembang to support the Navy’s 22nd Air Flotilla. This movement of forces preceded the next phase of operations designed to gain full control of the air and sea around Java. 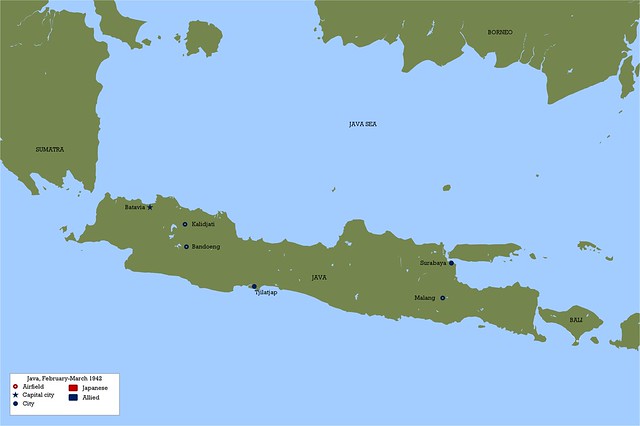 On the 18th Takao G4Ms launched their first raid on Surabaya, whilst the Zeros of the Tainan Kokutai attacked Maospati airfield in an attempt to whittle down the Allied air force. The 17th Provisional Pursuit Squadron intercepted and claimed six bombers and three fighters shot down – actually four G4Ms failed to return, which was still a significant setback for the Takao Ku. Several other bombers returned with dead crewmen. Nevertheless, the bombers managed to sink the old cruiser Soerabaja and several other vessels whilst the Tainan Kokutai claimed several Dutch Buffalos destroyed at Maospati. This operation was designed to provide cover for the landing of Japanese troops on Bali, which was completed successfully despite pin-prick attacks by a handful of A-24s.

The 19th of February would prove to be a disastrous day for the Allies in the defence of Java. To the east, Darwin suffered a devastating attack by the carriers of the Kido Butai. On Java itself, two large air raids hit each end of the island. In the west, the Japanese Army Air Force joined the attack when five Ki-48s attacked Semplak airfield, escorted by Ki-43s of the 59th and 64th Sentai. The field was badly hit, with four Hudson bombers destroyed as well as several civilian aircraft. Four Buffalo interceptors were also shot down. Following the raid, the decision was made to withdraw all civilian KNILM airliners to Australia. Later in the afternoon the IJAAF returned to hit Bandoeng airfield, with similar results – more Buffalos were shot down in the air, and several aircraft were destroyed on the ground. In the West, the Tainan Kokutai escorted 18 bombers to Surabaya. The 17th Pursuit Squadron was airborne and able to intercept, but suffered grievous losses in the attempt – seven of their P-40s were quickly shot down by the aggressive Zeros. In total 15 ABDA fighters were destroyed during the day.

A day later the ABDA forces attempted to strike back at the Bali landings, when seven A-24s set out to bomb the landing forces covered by 16 P-40s. Tainan Kokutai Zeros were covering the landings and these tangled with the P-40s whilst bombers bored in to attack. Two of the A-24s were shot down, as were another two P-40s – Maj Charles Sprague, commanding officer of the 17th Provisional Pursuit, was killed. Later the same day the Tainan Ku swept over Malang airfield in response, destroying several of the B-17s based there. The Allies were again on the receiving end of rough treatment on the 21st, when the Takao Kokutai with a heavy escort of Zeros again headed for Surabaya. Here they were again met by 16 P-40s of the 17th – however the Zeros managed to jump the Americans and shot down two of them immediately, although the 17th claimed to have downed 5 of the Zeros in return – claims not borne out by actual Japanese losses. Yet again the beleaguered defenders suffered at the hands of the rampant Japanese, and more punishment was to come in west Java as the Imperial Army’s 90th Sentai Ki-48s, covered by 59th and 64th Sentai Ki-43s, hit Kalidjati and destroyed five 139WHs and a grounded airliner.

Losses of so many aircraft meant that the 17th Provisional now more pilots than it needed. Many of the surplus pilots were sent to the port town of Tjilatjap, on the south coast of Java, to await delivery of a new batch of P-40s that were due to be shipped in from Australia – these were being loaded on the seaplane tender Langley (which had been the US Navy’s first aircraft carrier) and the freighter Sea Witch. These two ships would detach from a convoy bound for Burma to dash in and deliver their valuable cargo. 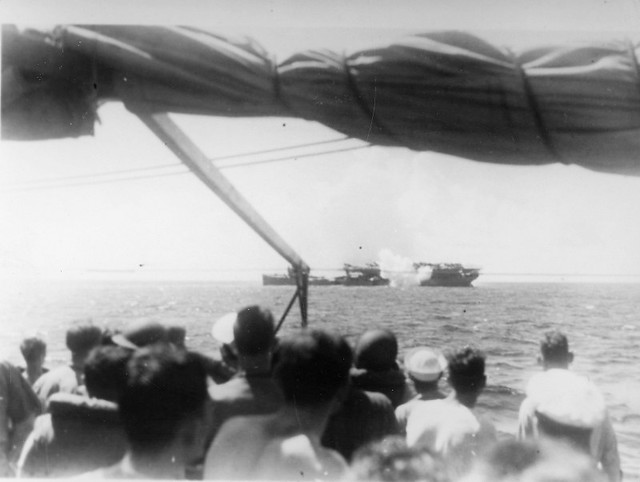 As ABDA command awaited the arrival of these ships, the punishment inflicted on Java continued. On the 23rd yet another bombing raid set off from Kendari heading for Malang airfield in the east, and the following day the Army again mounted a heavy raid in the west. 27 Ki-43s sweep over western Java, claiming five Allied fighters shot down. These were followed by Ki-21 and Ki-48 bombers that hit Kalidjati and Bandoeng airfields. Many aircraft were destroyed on ground, including several unserviceable aircraft that could not be withdrawn to Australia. A repeat raid in the afternoon was intercepted by RAF Hurricanes of 605 Squadron which claimed three bombers shot down, but suffered the loss of one of their own. Malang and Surabaya were again attacked in the east, and several vessels set ablaze in the harbour. American P-40s attempted to intercept and claimed two G4Ms shot down, but most of them suffered damage in return. The Allies ability to stop the Japanese raids was becoming increasingly tenuous.

Worse news was to come for the defenders of Java, as the Japanese brought additional units into action. The bombers of the 22nd Air Flotilla, having completed a move to P.2 airfield on Sumatra following the successful conclusion of the Singapore campaign, contributed their first major raid on Java on the 25th of February. 27 G3Ms of the Genzan Kokutai set out for the capital, Batavia, in company with Army bombers that hit the nearby Semplak airfield. RAF Hurricanes of 605 Squadron again rose to intercept but lost two of their number shot down, in return for a single Zero.

The Takao Kokutai’s G4Ms were meanwhile heading back to Surabaya again, with their nemesis the 17th Provisional – led by their new commander, Capt. McCallum – again rising to intercept. The P-40s attempted to engage the bombers but were immediately jumped by the escorting Tainan Ku Zeros – McCallum was forced to bail out of his damaged fighter but was then machine-gunned in his parachute and killed.

The renewed air offensive was designed to pin down the ADBA forces whilst a complex invasion plan unfolded. Two separate invasion fleets were heading for Java, one to land troops on the western end of the island at Merak and Eretan Wetan, either side of Batavia, the other to land troops on the northern coast 100 miles west of Surabaya. To cover the movement of both of these forces, the carriers of the Kido Butai, having completed their attack on Darwin, entered the Indian Ocean in order to prevent reinforcements moving from Australia to Java. Positive intelligence of the movements for the Allies came when a small force of bombers on a harassing mission to Sumatra came across the eastern invasion fleet, covered by the carrier Ryujo, on the 26th.

Japanese reconnaissance aircraft also made an important discovery south of Java. The Langley and Sea Witch had detached from the Ceylon-bound convoy MS.5 and set course for Tjilatjap, travelling independently. Langley met her escort, the old American destroyers Edsall and Whipple in the early hours of the 27th of February. Soon thereafter a patrolling bomber, scouting for enemy vessels heading to or from Java, spotted the Langley and her escorts. Bombers of the Takao Ku were soon in the air and heading for the seaplane tender’s last known position, spotting her just before noon. The 16 G4Ms attacked in two waves; Langley was able to dodge the bombs dropped by the first, but the second wave were more accurate. The old ship was hit by five bombs which shattered her steering gear, caused fires to break out, and started a flood which give her a list. Escorting Zeros also strafed the ship, concentrating on the P-40s lashed to her flight deck. It was quickly clear that the ship was doomed, and the order was given to abandon ship. The Whipple finished off the Langley, scuttling her with torpedoes. All but 16 of her crew survived but her cargo of previous fighters was lost. Sea Witch, meanwhile, safely arrived in Tjilatjap. 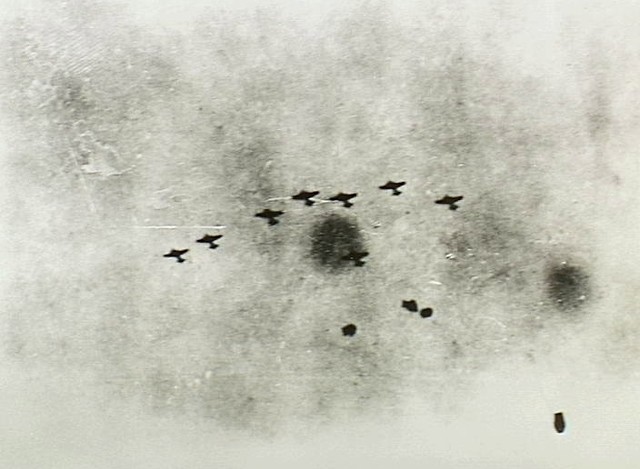 Formation of Japanese bombers attacking warships in the Java Sea

The Allies had by this time also spotted the Japanese surface force heading for western Java. Rear Admiral Karel Doorman led an ABDA force of five cruisers and nine destroyers from Surabaya to intercept the Japanese, but floatplanes from the Japanese cruisers discovered Doorman’s flotilla first. Bombers from both sides went in to attack as the opposing forces closed in on each other – G4Ms from the Kanoya Ku claimed to have hit the British destroyer Jupiter, but in fact missed her, and 27th Bomb Group A-24s claimed to have sunk a Japanese transport. In the subsequent sea battle, the ADBA force suffered the loss of two cruisers, thee destroyers and 2,300 men, including Admiral Doorman. The Japanese invasion flotilla was forced to retire north temporarily, but was soon able to resume its advance south – the planned landings were delayed by just one day, with the western force being landed on the 1st of March.

In the face of the impending landings, evacuation sof civilians and non-essential personnel were continuing. One Empire flying boat engaged in this task, the Circe (a sister of the Corio which had been shot down in January), vanished without trace on the 28th of February. The flying boat Corinthian had departed from Tjilatjap just minutes before the Circe but arrived safely in Broome, adding to the mystery. 72 years elapsed before a check of Japanese records revealed that a Takao G4M on patrol had come across the flying boat and shot it down. 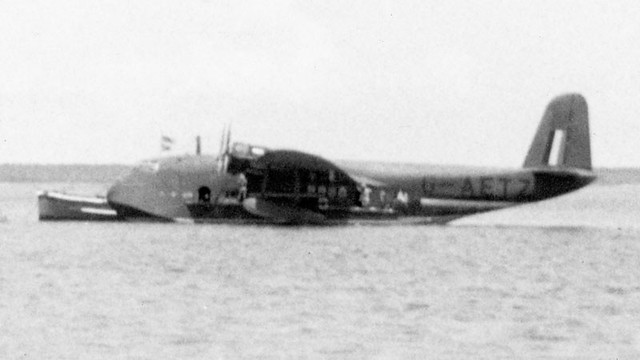 The defence of Java now entered its final act. The ABDA command, crippled by a divided command structure, a lack of available forces, and the sheer speed and devastation of the Japanese advance, would now have to fight off the Japanese on land as well as in the air and at sea.

The Fall and Surrender of Java