Even before the fall of Singapore in mid-February 1942, British air forces had been concentrating on the Dutch island of Sumatra in the knowledge that the airfields there were safer than those on the fortress island. 48 additional Hurricanes were added to the RAF’s fighter force when the carrier Indomitable delivered them to Sumatran airfields on 27th January. With strength growing, the press in the UK led the public to believe that the aircraft based on Sumatra would be able to provide an ‘air umbrella’ to protect Singapore. This was misleading – the nearest airfield on Sumatra was 50 miles from the city, too far away to provide the kind of constant air patrols. Moreover, these airfields were of poor construction, with primitive facilities – most of them had no anti-aircraft protection, and the roads between them and other military positions were of incredibly poor quality.

Aside from the Hurricanes, the RAF had also flown in reinforcements of Blenheim bombers from the Middle East. These, when joined with surviving Blenheim and Hudson bombers from Singapore, formed the new 225 (Bomber) Group which was charged with finding and sinking any Japanese shipping threatening the Indies. 226 (Fighter) Group controlled the Hurricane squadrons. Most of the fighters were based at Pangkalanbenteng airfield, which was better known as P.1, whilst the bombers roosted at Praboemoelih airfield, known as P.2 to the British. Both groups operated under the overall control of the American-British-Dutch-Australian Command, or ABDACOM.

The Japanese continued to push south, heading for the Dutch oil fields and refineries that were the primary objective of their South Seas operation. Sumatra was home to major refineries at Pladjoe, outside the town of Palembang, and Sungei Gerong, the facilities positioned on either side of the Moesi River. On the 10th of February a Japanese invasion fleet set out for Sumatra, covered by the carrier Ryujo sortieing from her new base at Camranh Bay in Indochina, and land-based aircraft of the 22nd Air Flotilla and the IJAAF’s 3rd Hikodan.

225 Group was kept busy throughout January 1942, flying small harassing raids to Japanese-controlled airfields on the Malayan Peninsula. The British fighters, meanwhile, were engaged in covering convoys to and from Singapore itself, as well as shuttling in to the island to support the local fighter squadrons. Despite these efforts, it soon became clear that Singapore was doomed. The only high point for the RAF was the arrival of a shipment of crated Hurricanes in Batavia, where ground crews began to hurriedly prepare the fighters for combat. 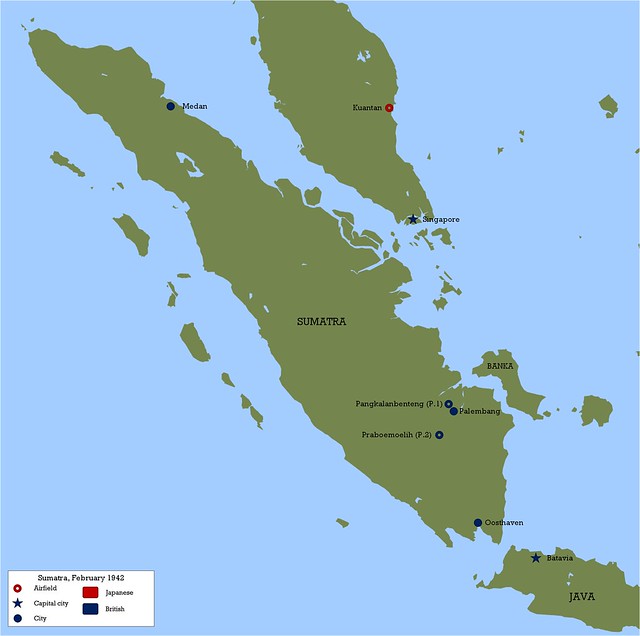 A Japanese reconnaissance plane spotted the build-up of aircraft on the ground at P.1, and on the 6th of February Ki-48s of the 75th and 90th Sentai set out to strike the airfield. The bombers failed to find the target in bad weather, but the escorting Ki-43s of the 59th and 64th Sentai managed to reach the field and carry out a strafing attack, claiming several aircraft on the ground and shooting down a pair of Australian-crewed Blenheims. Returning the following day, the 64th claimed to have shot down 10 Hurricanes which, thanks to a very tardy air raid warning, were caught trying to take off. A handful of 90th Sentai bombers which accompanied the fighters destroyed half a dozen Blenheims and three Hurricanes on the ground. It was a disastrous day for the British.

On the 11th of February, as reports of Japanese movements towards Sumatra came in, a Hudson bomber discovered a Japanese fleet consisting of 22 transports covered by a pair of cruisers and a squadron of destroyers. This fleet was spotted north of Banka island heading south for the mouth of the Moesi River, the armada being covered by a force that included the carrier Ryujo. A force of Blenheims sent out to attack the convoy lost two aircraft to takeoff accidents and never made contact with the transports. More heavy raids on P.1 kept the RAF fighter force on the back foot, whilst British reconnaissance aircraft sought to regain contact with the Japanese invasion fleet. A Catalina of 205 Squadron eventually found the convoy just 30 miles off the coast.

Whilst covering the progress of this force, the Ryujo had been busy. The veteran carrier’s air wing swept the seas between Malaya and Sumatra, attacking ships fleeing from Singapore. Her B5N torpedo bombers badly damaged the Dutch tanker Merula, which later sank under tow. Two British auxiliaries, HMS Giang Bee and HMS Siang Wo were also sunk by Ryujo bombers, and the steamer Subadar was forced to beach herself on Banka Island. These were just a few of the dozens of Allied ships that were sunk by Japanese Army and Navy bombers that were combing the seas with near-impunity. The cruiser HMS Durban was attacked and damaged by Ryujo planes and G3Ms of the Genzan Ku, but she was nevertheless able to safely guide her convoy to Java before withdrawing to Ceylon for repairs. A small force of Hudson sent out to find the carrier failed to do so, and instead attacked the invasion transports without success.

Reconnaissance flights on the morning of the 14th of February revealed that the Japanese flotilla had entered the Banka Strait – the landings were clearly imminent. At first light, 15 Blenheims covered by 15 Hurricanes were sent out to attack a reported carrier, but Australian Hudsons would get the first licks in against the transports. Six bombers of number 1 Squadron RAAF dived in to attack, but were immediately set upon by Zeros of the 22nd Air Flotilla. One Hudson was shot down, in exchange for a series of hits claimed on the transports. A second wave of five Hudsons suffered worse losses, with just one of the aircraft returning to base – the Zeros taking a heavy toll. Finally, the Blenheims of 211 Squadron completed the attack, sinking the small transport Inabasan Maru whilst 84 Squadon went after the Ryujo – failing to score any hits.

The escorting Hurricanes returned to P.1 to encounter a large force of Japanese aircraft – these were 34 Ki-56 and Ki-57 transports dropping paratroopers of the 2nd Parachute Regiment onto the airfield and the nearby refinery at Palembang. These were preceded by Ki-21s dropping anti-personnel bombs and supplies, the entire force covered by 59th and 64th Sentai Ki-43s. The paratroopers were required to jump in the face of anti-aircraft fire. Several Hudsons were on the ground, these escaped the attentions of the strafing fighters and several were able to escape to P.2. Adding to chaos, 488 Squadron Hurricanes from Batavia, low on fuel, arrived at P.1 whilst the drop was in progress. Two were shot down, but a Ki-21 was lost to the Hurricanes in return. Many other fighters were warned off, and made for P.2. instead. 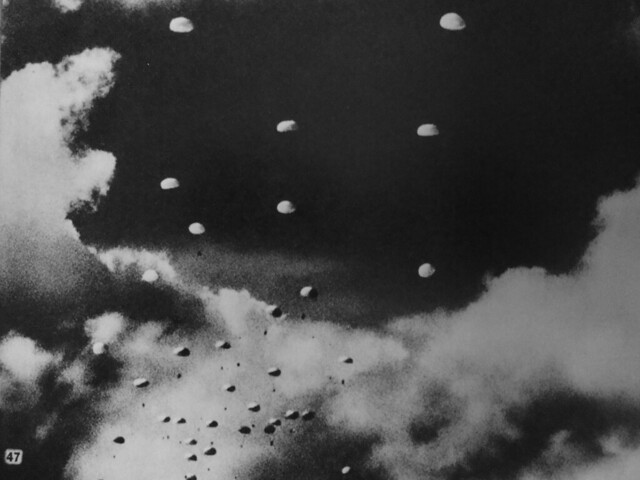 The paratroopers were unsuccessful in their attempt to take the airfield, being fought off by the small contingent of just 110 Dutch troops supported by 225 ground crew from the British squadrons. A smaller force that dropped closer to the Pladjoe oil refinery was temporarily able to capture the facility intact, before Dutch troops rallied and retook it. They destroyed the oil storage facilities but were unable to do the same to the refinery equipment, which would later be captured intact by the Japanese. The British meanwhile were beginning to withdraw from Sumatra, with the Hudson squadrons being pulled back to Java whilst many of the ground crews made for the small port of Oosthaven.

The next day, as Singapore was surrendering to the Japanese, the invasion fleet was landing its troops at various points near Palembang. An ABDA naval force had been despatched from Java to attack the Japanese, but was soon discovered by a reconnaissance floatplane from the cruiser Chokai. The Ryujo sent out her B5Ns to attack in two waves, whilst over 50 bombers of the Mihoro and Genzan Kokutai also made strikes on the formation. No ships were sunk, although the heavy cruiser Exeter suffered slight damage and two American destroyers had bombs fall close enough to cause a small amount of shock damage. The Allied naval commander, Admiral Doorman, decided that he could not press the attack without suffering extreme losses, and turned back for Java. 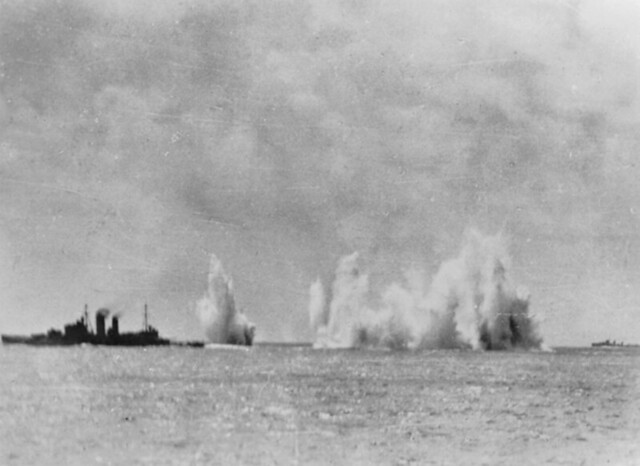 HMS Exeter under attack during the Battle of the Java Sea

Whilst this drama was unfolding at sea, the landings were proceeding apace. British bomber squadrons mounted numerous raids on the transports and their attendant landing craft. The Blenheims of 211 Squadron claimed to have destroyed several barges laden with troops whilst Hudsons from 8 Squadron RAAF hit and badly damaged the transport Otawa Maru. B-17s from the 19th Bomb Group on Java also contributed several sorties, bombing from high level and claiming damage on a transport and a cruiser. When the bombers completed their attacks, the escorting Hurricanes swept in to strafe the various landing craft as they shuttled troops ashore. Despite these efforts, the Japanese managed to secure a foothold ashore and land further troops, who marched to link up with the paratroopers near Palembang refinery. It was clear that Sumatra was indefensible and plans were made to withdrawn ABDA forces to the port of Oosthaven, and withdraw them across the Sunda Strait to Java.

The End on Sumatra

At first light on the 16th the British aircraft began to withdraw from P.2. The Hudson squadrons had already largely completed their transfer to Java, and the Hurricanes soon followed. Each Blenheim carried as many ground crew as possible in addition to the aircrew. One Blenheim suffered from engine trouble, and all but one of the eight occupants were killed in the subsequent crash-landing. Several other Blenheims that were not in airworthy condition were set alight on the airfield to prevent them being captured. The remaining ground crews set out by road or rail for the Oosthaven, hoping to find transports there to take them to safety.

On the 17th of February a total of around 5,000 troops and civilians were evacuated from Oosthaven. Japanese air reconnaissance from the Ryujo force discovered the shipping leaving the port, and attacks were conducted accordingly. Naval G3M bombers from the Genzan Kokutai attacked and sank the Dutch transport Sloet van der Beele, which was being escorted by the destroyer Van Nes. B5Ns from the Rjuyo followed up this attack by sinking the destroyer. 79 crew and passengers from the Sloet van der Beele were rescued by a Dutch Catalina flying boat, and safely taken to Java.

So ended the defence of Sumatra.