As the first wave of aircraft was beginning their attack on Pearl Harbor, a second wave was already winging its way south to join in the attack. Whilst the first wave had the Pacific Fleet as its primary target, the follow up would concentrate on completing the destruction of the American airfields as well as mopping up any ships that appeared to be escaping. With the Americans now fully alerted, manning anti-aircraft defences and even getting a few interceptors into the air this would not be an easy task. However, it was vital to damage the American patrol bomber force sufficiently to allow the Kido Butai to escape cleanly, as well as ensuring that the Pacific Fleet would not be able to interfere with the Japanese timetable for conquest in the South Seas. 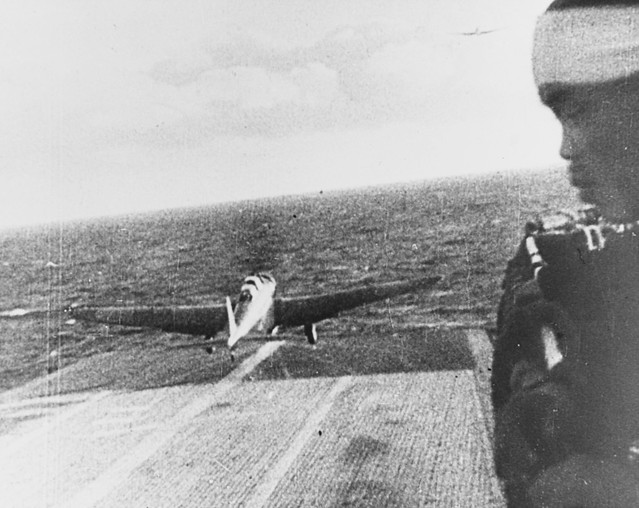 The second wave of the Pearl Harbor strike force had been launched from the carriers before the first wave had reached the north coast of Oahu, in fact the aircraft completed the launch 15 minutes ahead of schedule. Of the 167 aircraft that comprised this second wave, an A6M Zero and 3 D3As had to abort due to various issues, leaving 163 to continue on. The wave consisted of 54 B5Ns with normal 250kg bombs, all relatively green crews from the new carriers Shokaku and Zuikaku, 75 D3As led by the China veteran LtCdr Takeshiga Egusa, and 34 A6Ms led by Lt Saburo Shindo, formerly of the 12th Kokutai. The overall commander was LtCdr Shigekazu Shimazaki of the Zuikaku, who also led the level bombers. No torpedoes would be carried by any of the B5Ns.

The attack by the second wave began at around 0850, following a short lull in the action as the first wave departed. Anti-aircraft fire was immediately thrown up, proving that the Americans were by now completely alerted and ready to Shindo’s Zeroes were the first to attack, carrying out a strafing attack that worked over Kaneohe and Bellows airfields. At Kaneohe, already damaged by the first wave, every aircraft at the base was either destroyed or damaged. Just three of Patrol Wing 2’s PBYs, all of which had been out on routine patrols that morning, remained airworthy by the end of the attack. The Americans showed their teeth, when ground fire shot down the Zero of Lt Fusata Iida, who was killed. The B5Ns dump their bombs on the hangars, destroying them and the aircraft undergoing maintenance inside.

At Bellows several O-47 and O-49 observation aircraft were burned, one being shot down attempting to take off. The Zeroes also came across one of the B-17s that had landed during the first wave, and strafed it again for good measure. As the fighters moved on to Wheeler they come under attack from a pair of P-40s, flown by Lieutenants Welch and Taylor in their second sortie of the day. Welch claimed to have destroyed a Zero, adding to his two claims over Ewa. Three more P-40s were attempting to take off from Bellows, but these were caught by the incoming Zeroes and all were shot down, with just one of the pilots surviving. 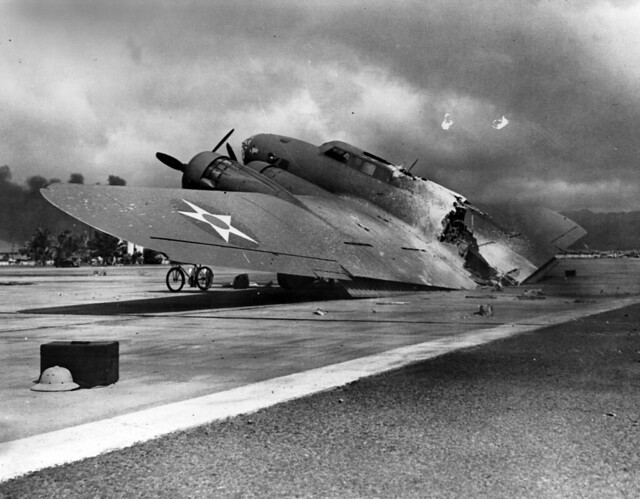 The B5Ns split up into three groups before attacking their airfield targets. 9 worked over Kaneohe just after the Zeroes completed their strafing runs, inflicting yet more damage on the hapless facilities there. 18 more made for Ford Island with the largest group of 27 aircraft heading for Hickam. Here the inexperienced crews put in a good performance, hitting and wrecking several hangars and contributing to the destruction of the aircraft based there. One group of B5Ns dropped their bombs well short of the target, pummelling the baseball diamond just outside Hickam.

Dive Bombers Into The Fray

The dive bombers under LtCdr Egusa divided into 4 groups. These pilots had been instructed to target ships damaged by the first wave, and in particular to look for an opportunity to sink ships in the narrow entrance to Pearl Harbor. The Nevada, damaged by a torpedo during the first wave, had quickly worked up steam and was heading out to sea despite torpedo damage to her bow area. About 14 D3As accordingly concentrated on her as she passed the 1010 dock, making for the harbour entrance. 5 bombs hit her and many more were damaging near misses, and rather than wait for yet more bombers to complete the job the battleship was grounded on Hospital Point to prevent her sinking. Several of the bombers that attacked the Nevada had done so in preference to bombing the oiler Neosho, which was likewise attempting to escape out to sea. Had she been hit, her cargo of oil and gasoline would likely have exploded and caused yet more damage to the remaining ships on Battleship Row.

Other groups of dive-bombers attack the Navy Yard, where several ships were immobilised in dry docks. A particularly tempted target was the battleship Pennsylvania, which shared a dock with the destroyers Cassin and Downes. One D3A scored a direct hit on the battleship, which was soon followed by another bomb hit from one of the high-flying B5Ns. Both Cassin and Downes were also hit and soon the two destroyers were on fire. Within minutes they had both succumbed to explosions in their magazines and torpedo storage, which caused Cassin to capsize against Downes. Nearby the destroyer Shaw, undergoing a refit in a floating drydock, come under attack by more D3As. She took three hits in her bow area, which started fires that eventually caused a spectacular explosion in her forward magazine, blowing her bow off. The explosion and following cloud of smoke could be seen all around the harbour. 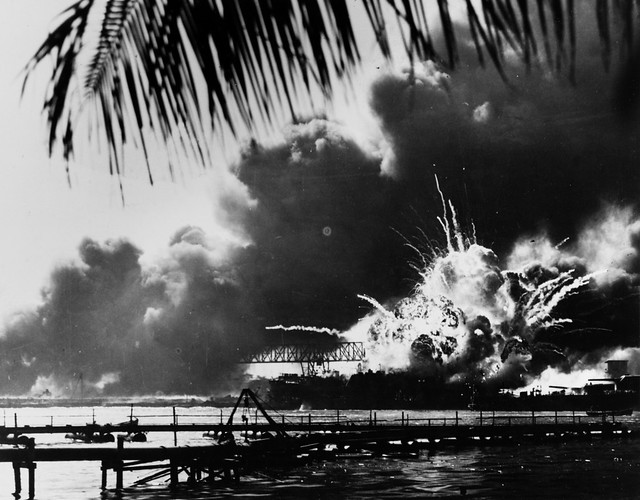 Other bombs hit ships at anchor in the harbour. The cruiser Raleigh, already hit by a torpedo aimed at Utah in the first wave, was struck by one bomb and near-missed by another. One of the attacking D3As then strafed the ship for good measure. The cruiser Honolulu was damaged by a bomb which struck the pier to which she was moored, causing some flooding and other damage. The nearby St. Louis had gaping hole in her hull, caused not be the attack but by repair work to her boilers. Her crew quickly patched the hole and got the ship underway, attacking a suspected submarine on their way out to sea.   Having expended all their bombs, the D3As then went to strafe Ewa, Hickam and Ford airfields.

By this time four P-36 fighters had managed to take off and make their way to Ewa, where they ran into the D3As. 1Lt Lewis M. Sanders quickly shot one of the dive bombers down, before seeing his wingman 2Lt Gordon H. Sterling shot down and killed by a Zero. Another P-36 flown by 1Lt Philip M. Rasmussen shot down another D3A before himself taking fire from a pair of Japanese fighters. He shot up one of his adversaries before his damaged fighter fell out of control necessitating a quick withdrawal from the fight. Luckily for Rasmussen, a pair of 20mm cannon shells had hit his radio rather than continuing into the cockpit where they would have surely killed him.

Fuchida’s aircraft was the last to leave, the raid commander having orbited throughout the attack to observe and direct. The results that he would report back were impressive – the Arizona, California, West Virginia, and Oklahoma were sunk. The Nevada had been run aground to prevent her sinking. Three other battleships had suffered varying degrees of damage, and the ex-battleship Utah was sunk. A dozen other ships were damaged. 87 out of 169 Navy and Marine aircraft were destroyed, as were 101 out of the 233 USAAF aircraft present. Most importantly for the Japanese 24 of Patrol Wing 2’s PBYs had been destroyed, severely limiting the capability of the Americans to locate Kido Butai in the aftermath of the attack. In total 2,403 people were killed (over a thousand from Arizona alone) and 749 were wounded. 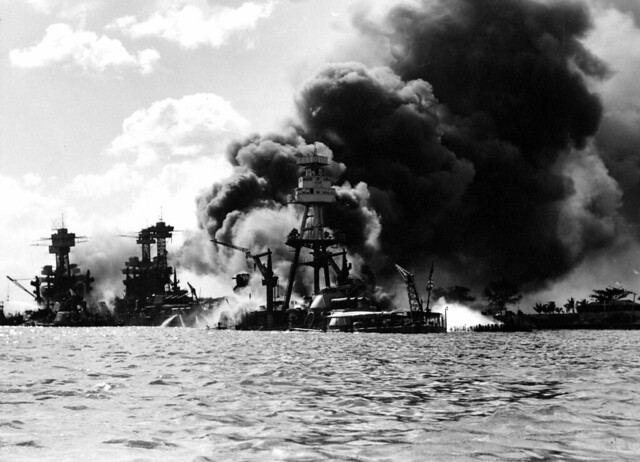 Crucially though the Pacific Fleet’s three precious aircraft carriers had all avoided the attack completely. Lexington was en-route to Midway island to deliver a squadron of Marine dive-bombers; upon learning of the attack she quickly abandoned this mission to return to Pearl. Saratoga was on the West Coast having completed a refit that had kept her away from the fleet for most of 1941. Enterprise had the luckiest escape of all; having completed a mission to deliver fighters to Wake Island she was due to return to Pearl on the 6th of December, but had been delayed by bad weather. These three ships would spearhead American attempts to slow Japanese expansion in the months ahead.

A further controversy has surrounded the Japanese decision not to launch a third wave. Although the fleet had been damaged and Oahu’s airfields badly battered, Pearl Harbor’s submarine base, the tank farm containing millions of gallons of fuel, and the shipyards and repair facilities that would be crucial during the war were completely untouched. After the war Mitsuo Fuchida claimed that he pushed for a third attack but was rebuffed by Admiral Chuichi Nagumo, who commanded the Kido Butai. This claim may be suspect, and it is probably that a third wave would have had to land after dark – and Japanese Navy pilots were not trained for night carrier landings. It would also have faced greater resistance from the surviving American fighters and the fleet as a whole may have been susceptible to a counter attack from the Enterprise had it lingered too long.

Still, the Japanese could congratulate themselves on having pulled off a spectacular victory. The Pacific Fleet’s battle force was removed as a threat to the planned invasions of the Philippines and Malaya, in fact it https://drviraldesai.com/body-contouring-1/ would be almost two years before any of the battleships caught in the attack would see action. This success had cost the Japanese Navy remarkably little – 29 aircraft lost, plus 5 midget submarines, with just 64 deaths in action.

Following the attack, two squadrons of Japanese submarines were left in the area to cause as much havoc as possible. One of these, the I-70, was caught on the surface by an SBD of VS-6 from the carrier Enterprise and was sunk. In addition to sinking several merchant ships, the submarines carried out an effective reconnaissance of American forces. Several of the Type J3 and B1 submarines, which had a hangar for carrying a Yokosuka E14Y seaplane, launched them to observe the situation in Pearl Harbor over the next few months. On the 17th the submarine I-7 launched her E14Y in a dawn reconnaissance on the naval base, which revealed the extent of the damage done to the battle force. On the 8th of January the following year I-19 carried out a similar mission, as did the I-9 on the 24th of February.

The attack on Pearl Harbor finally brought the United States out of neutrality, and into a war which would continue for almost four years. Although the coming of war was not entirely unexpected, the shock of the unannounced attack coupled with the devastation wrought that day combined to propel the US on a mission to avenge the fallen of December 7th. The Japanese had given a spectacular demonstration of naval air power, showing that the battleship was no longer the dominant weapon in naval warfare. They would now face a race against time to take and secure as much territory as possible, before the US recovered from the shock, rebuilt their forces, and moved to destroy them.