During the night of the 7th/8th, MO Striking Force was ordered to sail closer to the MO Invasion Force in order to give it additional support following the loss of the Shoho. VAdm Takeo Takagi and his carrier commander RAdm Chuichi Hara between them decided to sail due north, which would allow them to offer distant support to the convoy, but would primarily simplify the search requirements for the following day – the American carriers would almost certainly be to the south, so Hara could leave the northern sectors to land-based aircraft whilst his B5N carrier attack planes covered the south. These search aircraft, seven B5Ns in all, were launched at 0600 on the 8th of May. H6K flying boats from Tulagi covered the areas to the north.

The Americans for their part were less sure where the Japanese carriers were. RAdm Frank Fletcher ordered Task Force 17 to sail west during the night in order to close on RAdm John Crace’s support group and the likely route of the invasion force heading for Port Moresby. Fletcher could not be sure if Hara’s carriers were to the north or to the south, so he had to order a full 360 degree search, albeit with the aircraft assigned to the south given shorter legs due to the lower likelihood of the MO Striking Force having sailed in that direction. In total 18 SBDs from the Lexington were launched at 0625, followed by fighters for the combat air patrol from both carriers. Task Force 17 then began to assemble aircraft on deck for the expected strike mission. 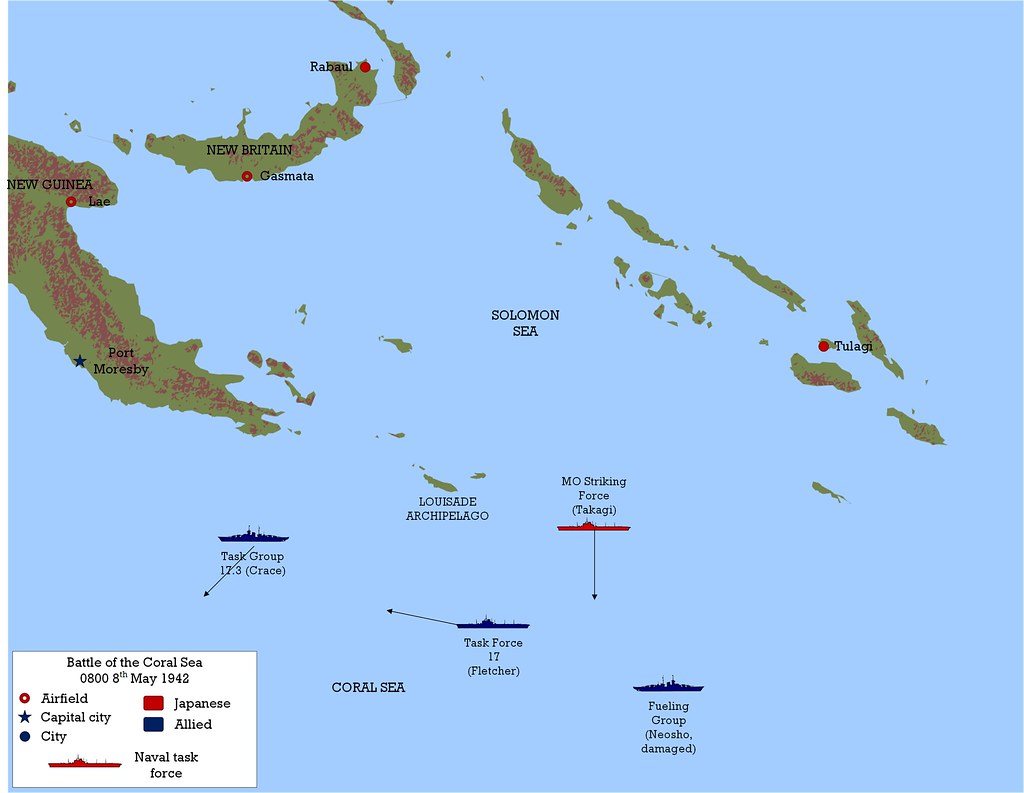 Lexington’s VS-2, with 12 SBDs, had been assigned the northern sectors. The weather was quite poor, with heavy cloud cover in the vicinity of the MO Striking Force. Nevertheless Lt(jg) Joseph Smith managed to catch sight of Hara’s ships, sending out a voice transmission at 0820 announcing that he observed two carriers, four cruisers and several destroyers. His transmission was received on the Lexington in garbled form with the enemy’s position not copied, but soon afterwards Smith’s radioman sent out a Morse report which was soon amplified by SBDs in adjacent sectors. Just a few minutes later, a Shokaku aircraft radioed that it had found the American carriers. The race to destroy the enemy’s carriers was now on.

The Yorktown launched her strike group first, with aircraft lifting off at 0900 – 24 SBD Dauntless dive bombers and 9 TBD Devastators, escorted by just 6 F4F Wildcats. The F4Fs were divided, with four covering the torpedo bombers and two covering the SBDs. By 0915 all aircraft were in the air and the 39 planes set course for the reported contact. The Lexington began to launch her strike soon after the Yorktown, at 0907 – 15 SBDs, 12 TBDs and 9 F4Fs rolling down her flight deck with the last aircraft in the air by 0925. The launch was reported by the nearby Shokaku search plane, so Hara was pre-warned that a major strike was heading his way.

Near the MO Striking Force, Lt(jg) Smith had to break off when he discovered that his radio was malfunctioning, following a brief exchange with Zeros. VS-2 commander LtCdr Robert Dixon had completed his own search and flew to the reported location, and soon began to send out amplifying reports for the incoming strike groups, remaining in the vicinity until the Yorktown air group arrived. Smith, meanwhile, came across Yorktown’s torpedo planes as he made his way back to base, and was able to use his voice radio to provide VT-5 skipper LtCdr Joe Taylor with up-to-date contact information. Not long afterwards they spotted the Japanese strike force making its way towards Task Force 17 to deliver their own attack.

At 1032 the leading Yorktown planes spotted the wakes of the MO Striking Force, far below. In the air above the carriers were half a dozen Zeros, with another 13 spotted on deck ready to launch when the incoming strike was sighted. Lacking air-search radar of similar capability to the American CXAM, the Japanese were reliant on keen-eyed lookouts – however the poor weather greatly limited their ability to spot enemy aircraft. The Zuikaku and Shokaku were several miles apart, with the Zuikaku close to a rain squall towards which she headed, hoping to find concealment from the incoming Americans. Shokaku, trailing her sister, was too far away to hide in the squall and would become the focus of the entire American attack. 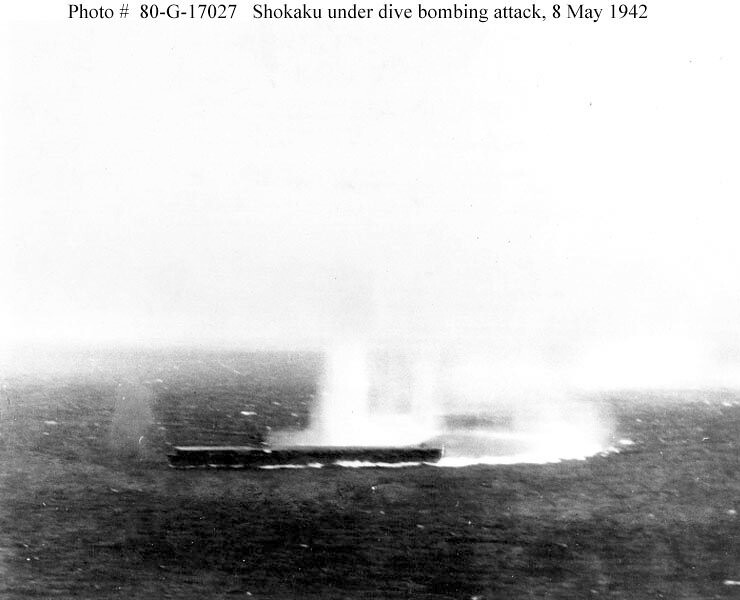 Shokaku at the Battle of the Coral Sea

SBDs from VS-5 and VB-5 led by LtCdr William Burch manoeuvred to take position upwind of the Shokaku, ideal dive-bombing tactics, and waited for the much slower TBDs of VT-5 to get into position for a co-ordinated attack. For almost half an hour the SBDs circled, somehow remaining unobserved by the lookouts on the Japanese ships until just before the attack proper began. Shokaku began to launch her standby fighters just as VT-5’s Taylor radioed that he was beginning his run, which was the signal for Burch to start his own attack.

The first seven SBDs all from VS-5 under Burch, pushed over to begin their dives at 1057. They swept past a trio of Zeros that snapped off a few rounds, and then followed the bombers down. The SBDs suffered from the same bombsight fogging issues that had affected them during the Tulagi raid, with the result that none of their bombs hit the Shokaku. Several of the SBDs suffered damage from the pursing Zeros before they were able to make good their escape, with the rear gunners making the unrealistic claim that they had shot down 4 of the fighters.

LtCdr Wallace Short’s VB-5 SBDs, 17 in total, were the next to dive. Each was armed with a 1,000lb bomb, ideal ship-killers.  The first division of 6 rolled in to attack but came under heavy anti-aircraft fire which focussed on the aircraft piloted by Lt John Powers. Powers’ aircraft was badly damaged, but he chose to continue his attack, releasing his bomb at the dangerously low altitude of about 500ft. His bomb struck the Shokaku near her island structure, but Powers was unable to recover from the dive and his aircraft hit the water, both crewmen being killed. Powers was posthumously awarded the Medal of Honor. VB-5’s second division suffered the same problem of fogging bomb sights, but they nevertheless managed a second hit on the now burning Shokaku. Zeros harassed the SBDs as they withdrew, and a second Dauntless was shot down before the Japanese broke off.

Taylor’s lumbering Devastators soon began their runs. The TBDs were too slow to get into position for an anvil attack, so they formed a wide line abreast to make runs on the Shokaku’s port side. Anti-aircraft fire was again heavy, and one TBD was damaged but still managed to make a clean drop, as did the other eight aircraft, albeit from long range: 1-2,000 yards. Unfortunately the troublesome Mark 13 torpedoes again put in a mixed performance, with three veering off on erratic runs. Shokaku, now manoeuvring at over 30 knots, close to the 33-knot maximum speed of the torpedoes, was able to avoid damage from the incoming ‘fish’. Although VT-5 claimed three hits, no Mark 13s actually hit the carrier. All nine TBDs escaped into a nearby cloud bank before the nearby Zeros, which had been tied up by the escorting VF-42 fighters, could attempt an interception.

In total the Yorktown air group claimed to have scored six bomb hits and three torpedo hits on the Shokaku, but they had actually scored just two hits with 1,000lb bombs. The carrier was damaged to the point that she could not conduct flight operations, but her hull and engineering spaces were intact and most of her aircraft had already been launched to attack Task Force 17. The nearby Zuikaku, still hidden in a rain squall, had escaped damage entirely. Two VB-5 SBDs had been shot down and several other aircraft had suffered damage but would nevertheless find their way back to the Yorktown. 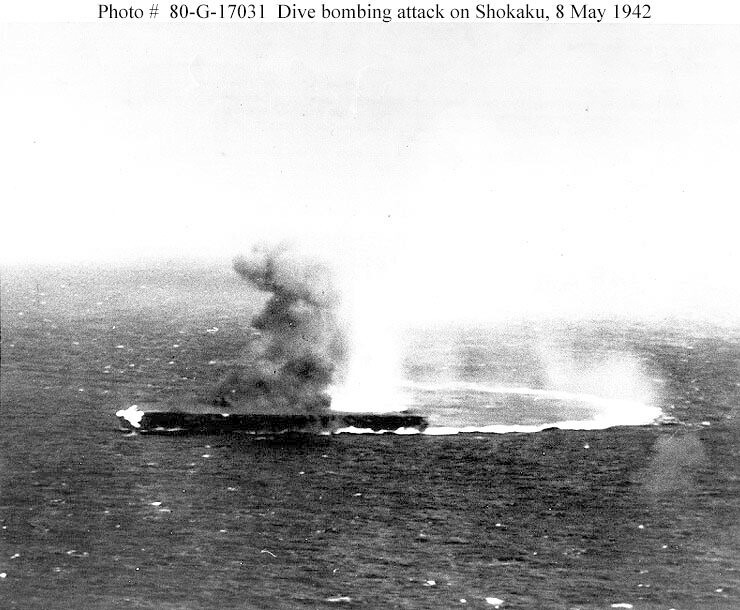 Shokaku hit during the Battle of the Coral Sea

The Lexington air group took off just a few minutes after their colleagues from the Yorktown, but had a much tougher time reaching the target with any level of coordination. One TBD was forced to turn back with engine trouble, and three of the escorting F4Fs became separated in the bad weather and likewise returned to the ship. The cloud cover also caused the SBDs and TBDs to lose sight of each other, making it impossible for the group to stay together – instead VB-2, the Group Commander’s flight and VT-2 flew in separate formations, descending to low-level to keep out of the cloud cover. Then, arriving at the reported position of the MO Striking Force, the Lexington fliers instead found only empty ocean. Commander William Ault, leading the group, ordered his charges to commence a box search in the hopes that the enemy was nearby. At 1130, he spotted the Shokaku, and ordered them in to attack – but VB-2, with eleven SBDs, never found the enemy and, low on fuel, turned for home.

Ault’s group was spotted by the airborne Zeros before he reached attack position, and they immediately tore into the F4Fs that had accompanied him. Rather than risk a lengthy and fuel-consuming climb to altitude for a dive-bombing attack, Ault decided to lead his four remaining SBDs in a shallow, glide-bombing run instead. This surprised the Zeros orbiting at higher altitude, and as a result the bombers were able to make their attack unmolested. Ault’s section claimed two more hits on the Shokaku, but in fact only one actually hit – just aft of the island. One of the four bombers suffered a malfunction and failed to drop its bomb, so the pilot turned around to make a solo run – he was never seen again, presumably falling victim to anti-aircraft fire. One of the F4Fs likewise disappeared, probably the victim of a Zero.

Following on the heels of Ault’s attack came the eleven remaining TBDs of LtCdr James Brett’s VT-2. They were escorted by four F4Fs, which were soon busy fighting off Zeroes which had speed and altitude advantage which resulted in two being shot down, but crucially they had given VT-2 a clear run on the carrier. The TBDs descended at high speed through patchy cloud cover, which reduced the amount of time that they were vulnerable. Breaking into the clear just a few miles from the Shokaku, VT-2 slowed to the required drop speed for the finicky Mark 13s. Two of the Devastators had become separated from the rest, and were harassed by Zeros as they made individual drops – both of which missed. This had the effect of giving the remaining nine TBDs a clear shot at the Shokaku’s starboard side – however, the swift carrier was able to turn away and avoid all of the torpedoes which had again been launched at long range – over 1,000 yards.

The scattered Lexington group now attempted to extricate themselves from the situation and head back to base, but they would not have an easy time of it. Ault’s SBDs came under attack from more Zeros, with Ault himself being wounded. Another SBD became separated and lost, and never found its way back to home plate – the crew were never seen again. Ault remained in radio contact with the Lexington for some time, but alone and unable to navigate back to the ship he realised his chances were slim. He was last heard from as he decided to ditch his aircraft, but neither he nor his radioman was recovered.

The American attack had crippled the Shokaku, and her captain recommended that she be detached from the MO Striking Force. Takagi and Hara agreed, and she turned north with an escort of two cruisers and two destroyers. 109 of her crew had been killed, and another 144 wounded, but her damage was not fatal and after a few weeks in drydock for repairs she rejoined the Fleet. She would, however, miss the an upcoming operation of the utmost importance to Admiral Isoroku Yamamoto.

Coral Sea: Searching for the Enemy