The island of Borneo was divided between the Dutch, who controlled most of the central and south of the island, and the British who controlled the northern coastal regions of Sarawak, Brunei and British North Borneo. Most of the island was covered with jungle, but in the coastal regions there were a number of towns that had grown up close to oil fields which fed major refineries, particularly at Balikpapan and Tarakan on the east coast. It was these refineries, and the fuels that they produced, that the Japanese sought to control in order to alleviate the strain imposed on their economy by the American embargo.

No British air units were present on Borneo, defence of the island having being left to the Dutch units of the Naval Air Service (MLD) and the East Indies Army Air Force (ML-KNIL). The MLD was equipped with a strong force of German-designed Do 24 flying boats and a smaller number of American-made Catalinas, which operated in small detachments of 3-6 aircraft that could be based out of small anchorages and lakes across the Indies. These flying boats had, by agreement with the British, been flying reconnaissance patrols over the South Seas in expectation of the Japanese offensive. The ML-KNIL had a larger force but one that consisted of mainly older, obsolescent aircraft including the Martin 139WH bomber (an export model of the B-10, long since discarded by the Americans), and Brewster Buffalo fighters, with a few Curtiss CW-21s also available. In the east of the Indies, at Ambon, an Australian detachment of Hudson bombers from 13 Squadron were joined by a pair of Buffalos for local defence.

The Japanese would rely on the air power projected by the 22nd Air Flotilla, still based on the airfields of southern Indochina following their victory over Force Z. The three kokutai of G3M and G4M land-based bombers would provide cover for the transports as they sailed to Borneo, as well as bombing British and Dutch airfields and ports to prevent any air or sea interference with the operation. Included within the fleet heading for the island was the seaplane tender Kamikawa Maru with her complement of floatplanes; these would provide local defence against Allied counter attacks from the air. 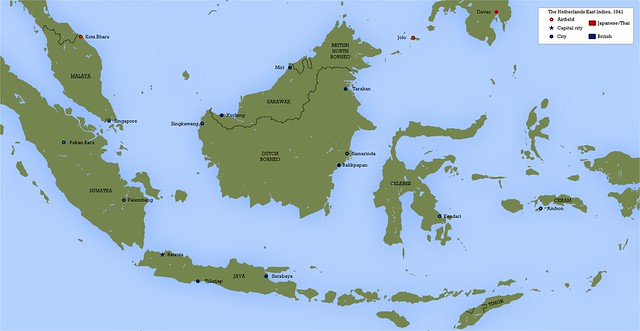 Map of the Netherlands East Indies

On the 16th of December 1941 the Japanese began to land at Miri, in Sarawak. The landing was unopposed, as the only major British land forces were based at Kuching further to the west. The British were unable to destroy the oil field equipment, and so the next day a squadron of three Dutch Do 24 flying boats of GVT-7, based at Tarakan, set out to bomb the wells. Arriving over Miri they sighted a small formation of Japanese ships, so whilst one of the Do 24s headed off to bomb the oil wells the other two launched an attack on a ‘cruiser’. One of the flying boats dropped a stick of 6 bombs, two of which scored direct hits on the ship. Actually the vessel was the destroyer Shinonome, and the bombs detonated in her after magazines. This caused a catastrophic explosion that ripped off the stern of the ship, which immediately began to sink. Within five minutes the Shinonome slipped beneath the waves, taking her entire crew of 228 with her. The Do 24 that had bombed the oil fields was shot down by an F1M floatplane.

The next few days saw both sides attempt to destroy each other’s shipping. Japanese G3Ms of the Mihoro Ku from Indochina attacked Kuching, claiming to have sunk a small freighter. They also attacked and damaged the facilities at Kuching airfield. The next day they raided Pontianak, where they encountered Dutch Buffalos which damaged one of the bombers so badly that it was forced to ditch in the sea just before reaching Saigon. Meanwhile Dutch Martin 139WHs attacked the Japanese shipping off Miri, where they were likewise intercepted by Japanese fighters – in this case F1M floatplanes from the tender Kamikawa Maru which shot down one of the bombers and damaged another.

On the 20th half a dozen 139WHs repeated the attacked, this time with an escort of 2 Buffalo fighters. Each side claimed to have shot down one of the enemy, but actually only one of the 139WHs was lost. To relieve the hard pressed floatplane fighters that were acting as a local defence for Miri, a detachment of Tainan Zeros arrived at Miri airstrip, followed soon afterwards by 9 Mihoro Ku G3Ms. Other bombers of the Mihoro attacked Singkawang airfield, the source of the Dutch raids on Miri, and destroyed two more bombers in an attack which also heavily cratered the runway.

The Dutch were meanwhile aware of a build-up of Japanese shipping in the Davao Gulf that was rightly interpreted as an invasion force to be directed at the Indies. Intending to disrupt the preparations of the Japanese, on the 23rd of December the Dutch decided to carry out a raid by six Do 24s of the squadrons GVT-2 and GVT-5. Despite heavy weather which caused the planes to become separated, they somehow reformed just as they arrived over Davao. The flying boats attacked the large tanker Tonan Maru No. 2, a converted whaler, which was badly damaged and had to withdraw to Japan for repairs. One of the Do 24s was hit in the fuel tank by an F1M and had to make a landing at sea, but its crew was picked up by another of the Do 24s. A complementary attack by FEAF B-17s of the 19th Bomb Group, which were returning to Australia having bombed Lingayen Gulf, was a bust as only one bomber was able to make the attack with indeterminate results.

With the Japanese having secured Miri with minimal effort, the troops re-boarded the transports in preparation for an operation against Kuching itself. Do 24s on patrol spotted the convoy, which guided the Dutch submarine K-XIV into range – the vessel sinking two of the transports. Do 24s also attacked the convoy, as did British Blenheims from Singapore. The Japanese landed at Kuching on Christmas Eve, as the Dutch again tried to bomb the shipping – but to no avail. Two days later Martin 139WHs from Samarinda again attempted to attack invasion shipping off Kuching, this time with more success – they sank the minesweeper W-6 and a transport, but by then the landings had already been successfully completed. The airfield at Kuching was badly damaged by demolition charges planted by the British troops before they withdrew, which prevented the Japanese using it until it was repaired a few days later. With the area secured more aircraft from the 22nd Air Flotilla could be flown in to Miri to help defend the new beachhead, just as the Dutch were beginning to suffer from high attrition in their limited bomber forces. Indeed, several Dutch units were forced to withdraw to Java and Sumatra in the face of the Japanese advance.

The Japanese made an unopposed landing at Jolo on Sulu Island in the southern Philippines, and established a forward airbase there. Zeros of the Tainan Ku quickly moved in to provide additional fighter coverage over northern Borneo. Their colleagues of the 3rd Ku were also in action, attacking Tonado Lake on Celebes – the location of the Dutch seaplane base from where the most recent attack on Davao had been launched. Here they destroyed four Do 24s on the water, as well as a civilian Sikorsky S-43 flying boat that had the misfortune to be in the wrong place at the wrong time. Meanwhile, Mihoro G3Ms were launching their first raid from Miri attacked the airfield at Tarakan, where they claimed to have destroyed at least one aircraft on the ground.

By this time the American air forces that had been forced to withdraw from the Philippines were beginning to regroup and get back in to action to support the Dutch. Patrol Wing 10 had moved to Surabaya and planned an operation to blunt the Japanese offensive. With large forces massing at ports in the southern Philippines, half a dozen PBYs were assembled for an early morning strike on shipping at Jolo on the 27th of December. These were organised into two flights which immediately got separated in cloudy weather, although by happenstance they both arrived over Jolo together. Unfortunately Zeros of the Tainan Ku had established a standing patrol and these immediately attacked the incoming bombers. Intercepting just before the bombers could make their runs, they quickly shot down one of the PBYs and damaged another enough to force it to jettison its bombs and make an escape. Three more PBYs were forced to make emergency landings due to fire or other damage, although most of the crewmen escaped to be smuggled south by resistance fighters. No damage was done to any of the ships at Jolo with most bombs harmlessly falling into the harbour.

Ships heading south from Philippines were increasingly coming under attack by Japanese aircraft that were ranging over an increasingly wide patch of the South Seas. The destroyer Peary had been undergoing a refit at Cavite when the Japanese bombed the base on 10th December, but had escaped major damage. Her crew hurriedly got the ship ready to sail, and she left the Philippines two weeks later. Heading south for the Makassar Strait Peary was discovered by H6K flying boats of the Toko Ku, which subjected the destroyer to a 2-hour bombing attack. Heavy anti-aircraft fire drove the bombers off before they could cause any damage, but most of the ship’s ammunition was expended in the effort. Later, she was mistakenly attacked by a trio of RAAF Hudsons, losing one of her crew to the friendly fire. Thankfully the rest of the journey was uneventful, and Peary arrived in Australia on the 3rd of January. The next day, the seaplane tender Heron was attacked by the same unit of H6Ks, suffering damage but shooting down one of the flying boats in exchange. Having landed on the water, the H6K was strafed until it sank, with the crew refusing lines thrown by the Americans.  The H6Ks were making their presence felt across the northern Indies, ranging across the area to find Allied shipping and air bases.

The Japanese had now secured key bases that would support their drive further south into the Indies. The Allied air forces had been hard pressed to beat off the Japanese which had so easily destroyed the FEAF in the Philippines, and they had failed to make any significant impact on the invasion convoys. The Japanese would now seek to consolidate their gains in the area before pushing further south through the Makassar Strait, with the aim of securing the key oil producing towns of Tarakan and Balikpapan.

Into the Makassar Strait