In mid-July 1937, with the situation in China clearly heading towards a broader conflict, the newly formed First Combined Air Group (1st Rengo Kokutai) had been deployed to support Japanese forces operating in-country.  The group consisted of the Kanoya Kokotai, which was to be based at Matsuyama airfield near Taipei on Japanese-controlled Formosa, and the Kisarazu Kokutai at Omura on Kyushu (which was soon to move to Cheju Island). Both units were equipped with the new Mitsubishi G3M Type 96 bomber, which possessed incredible endurance and was expected to be the primary strike weapon against Chinese airfields and cities. The initial attacks would need to be carried out after crossing vast stretches of ocean – the Kanoya Ku’s base was 400 miles south of Shanghai, the Kisarazu’s Omura base 500 miles to the west. The Imperial Japanese Army Air Force was trained primarily to support ground operations, and so its bombers did not have the range required to attack the anticipated targets.

After the 1932 ‘Shanghai Incident’ had showed the weakness of the Chinese aerial forces, Chiang Kai-Shek had taken steps to improve his capability in the air. American advisors including retired USAAC Capt Claire Lee Chennault had been brought in to rebuild the warlord-owned air forces into the new Chinese Air Force (CAF). Aircraft were purchased from the US, Great Britain, Italy and Germany. Fighter forces in particular were reaching a high state of readiness just as the crisis broke, based at the major airfields near Shanghai and Nanking. Chiang Kai Shek sent no planes to the northern (Beijing) area in the immediate aftermath of the ‘Marco Polo Bridge Incident’, wishing to preserve his air force. Fighting there continued for a month whilst the IJN, largely independently of the IJA, prepared for a ‘knockout blow’ by attacking and capturing Shanghai. 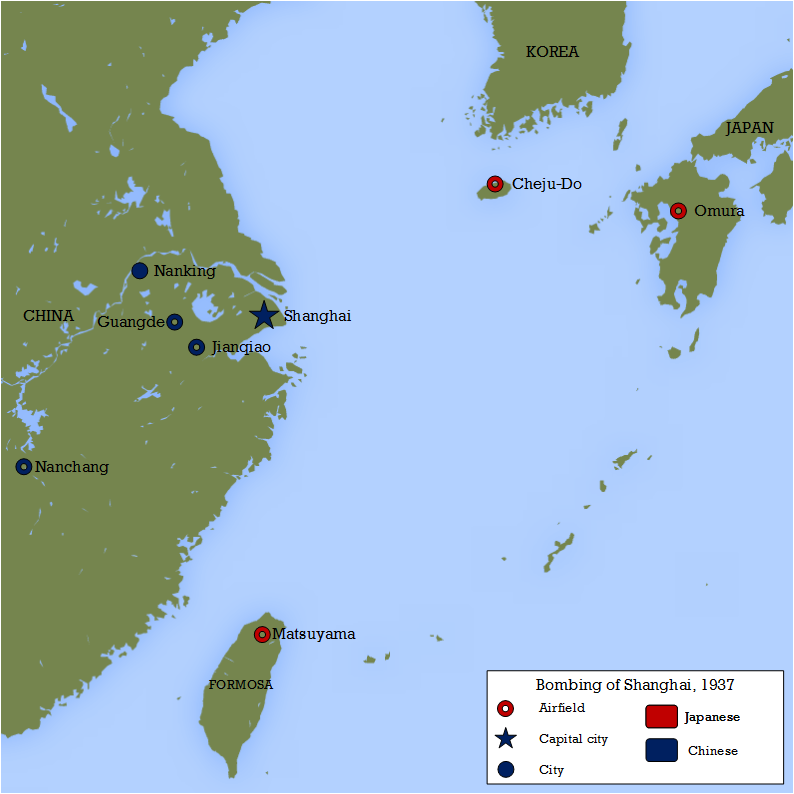 The Japanese opened their air offensive by launching the First Combined Air Group into action. A passing typhoon, which was to play havoc with Japanese plans, grounded the Kisarazu Ku but on the 14th of August, 1937, 18 Kanoya G3Ms were launched, in two waves of 9. The first wave was to attack the Chinese airfields of Jianqiao and Chiao-ssu near Hangchow and the second Guangde to the west of Shanghai, followed by an attack on Chien-chao near Hangkow on the return trip. The bombers were lightly loaded with just two 250kg bombs each strapped underneath their bellies.

Loyalist Chinese could reported the bomber force leaving Formosa, and further warning was provided when the planes reached the Chinese coast after their long flights. Jianqiao was the location of the Chinese Air Force’s fighter school and was home to a number of instructors who were proficient with the Hawks that made up the bulk of the CAF fighter arm. Chinese fighters were being ferried into the area and were actually caught on the ground when the first 9 Type 96s, led by Kanoya leader LtCdr Nitta, hit Jianqiao with a low level attack at just 1,500ft. Very little damage was done, and the Chinese fighters were able to complete refuelling and get into the air quickly to intercept the departing bombers. 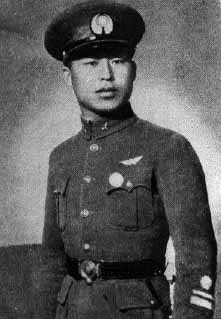 A small group of Curtiss Hawk II and III fighters of the 4th Pursuit Group, led by Col. Kao Chi-Hang, caught up with the Japanese just north of Shanghai. Two of the G3Ms were quickly dispatched, crashing in flames near the coastal village of Banshan, one being claimed by Col. Kao after a tenacious attack, the other by a group led by Capt. Lee Kuei-Tan. A third was damaged so badly that it crash-landed when it finally managed to get back to Formosa, and was written off – this aircraft was later shipped to Japan and put on display in Tokyo, complete with bullet holes.

LtCdr Asano led 2nd wave, which took off 5 minutes after 1st wave but got lost in the bad weather caused by the typhoon near Chinese coast. After eventually finding their way, the 9 G3Ms arrived at Guangde over an hour after the 1st wave’s attack. Again bombing results were unspectacular, and Chinese AA fire took its toll – 3 planes were damaged, with one having its fuel tanks punctured. A single Hawk III of the 34th Provisional Squadron piloted by an instructor, Capt. Chow Ting-Fong, came upon the second wave and attacked, damaging several G3Ms. The Type 96 that had received damage to its fuel tanks got lost in the gathering gloom, then regained its bearings, but not before using so much fuel that it could not reach its home base. This plane had to ditch at Keelung Harbour on Formosa. 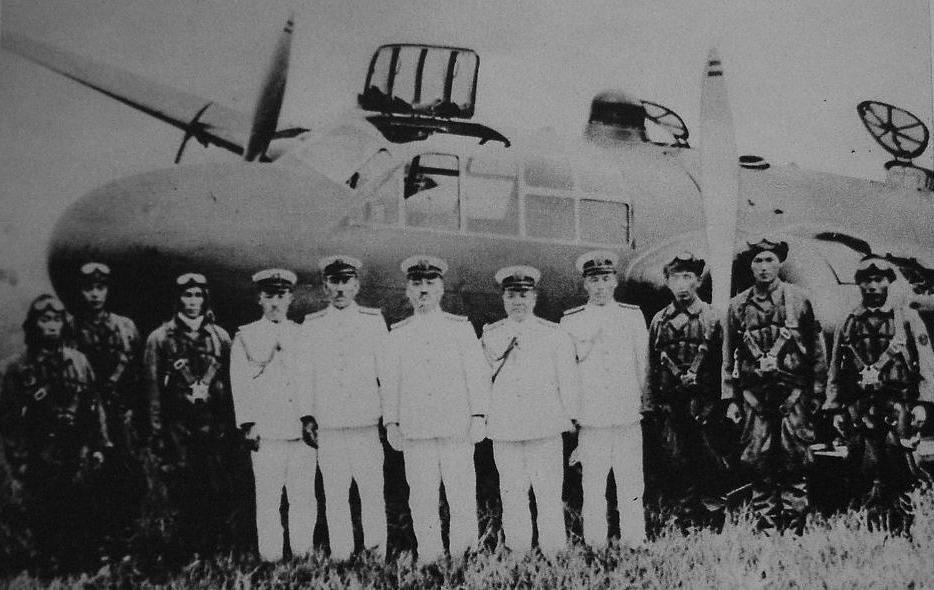 The results of the raid were shocking – 4 G3Ms had been lost out of the 18 launched (the Chinese claimed 6) and no appreciable damage had been done to either the airfields, the aircraft stationed there or the ground crews and facilities, despite claims by the bomber crews to the contrary. The handful of bombs that were sprinkled across the target airfields were simply not enough to cause any appreciable damage. The first wave claimed several Chinese fighters shot down, but this is not born out in Chinese records. The Chinese on the other hand were elated, and ‘814 Day’ is still celebrated by the successors of the Nationalist government of the time – although perhaps, given the disaster that occurred on this day in Shanghai, this may have been an attempt to expunge the memory of ‘Black Saturday’ in the city.

On the 15th the Kanoya Ku was again in action with their 14 remaining machines, flying a raid against Nanchang airfield deep in the Chinese interior, in the Yangtze valley. The weather was not good for bombing, and damage to the target was minimal. This time there were no losses, but the same cannot be said for the raid carried out by LtCdr Hayashida’s Kisarazu Ku. Their attack was carried out by 20 G3Ms, which hit airfields around Nanking. Chinese fighters of the 3rd and 5th Pursuit Groups, Boeing 281s, Hawks, and Fiat CR.32s, rose in opposition and again took a heavy toll on the flimsy bombers – 4 went down in flames before reaching the target, and 6 more were damaged. One was claimed by Capt. Fong, who had carried out the solo attack the previous day. Again, damage to the target was slight. The survivors landed at Cheju-Do, 150 miles closer to Shanghai than their previous base at Omura. This became the new home base of the Kisarazu.

The attacks by the First Combined Air Group shocked the world. The Japanese had proved that they had the capability to perform bombing raids that were beyond other air forces – indeed many commentators assumed that the Type 96s could not have been natively produced in Japan and must have been based on foreign designs such as the Junkers Ju86. However, news of the high losses experienced by the Kanoya and Kisarazu Kokutai was less well circulated or simply ignored.

On August 16th, 13 aircraft of the Kanoya Ku attacked Chu-Yung airfield near Nanking in two waves. A pair of G3Ms were shot down including that of the leader of the unit, LtCdr Nitta, who like almost all the crew of downed bombers did not survive the loss of his aircraft. A third, badly damaged, chose to divert to Cheju-Do rather than risk the longer flight to Formosa. Two of the bombers were claimed by the pilot John Wong, one of a number of Americans of Chinese parentage who had chosen to return to China to assist the Nationalist cause. The second wave also lost bomber during its attack, leaving just 10 serviceable aircraft on strength. The Kisarazu Ku also made an attack on this day, suffering 1 Type 96 damaged – this unit now had just 8 working bombers. After just three days of operations the two bomber units were down to less than 50% strength, prompting the First Combined Air Group’s commander to utter:

“In view of the pressing situation in the Shanghai Area, our air raids remind me of that famous, costly assault against the 203-Meter Hill” [a famous battle of the Russo-Japanese War, during which the Japanese lost 8,000 men attacking a hill outside Port Arthur]

Despite the high losses, the raids had to continue. On the 17th, the understrength Kanoya carried out armed reconnaissance of airfields deep in China, whilst the Kisarazu sent raids against Pangfou and Huaiyin airfields outside Nanking, which were suspected of having heavy bombers based there – 4 of these were claimed destroyed. On the 18th, attacks on Chinese railroad bridges were carried out but proved ineffective. On the 19th, both kokutai were sent to bomb Nanking’s Army Officer’s School, causing large fires but losing a Kanoya G3M. After this attack, low level raids from below 3,000m altitude were discontinued due to the threat of enemy fighters and flak.

In addition to increasing the altitude of attacks, the First Combined Air Group tried to change the timing. Up until this point most raids had been launched in the morning, were over their targets in the early afternoon, then back at base before sunset. Takeoffs, landings, and navigation over China were all easier to conduct during the daytime, however the light conditions also aided the Chinese in detecting and intercepting the raids. The Kanoya and Kisarazu therefore began to experiment with dawn, dusk and night bombing in order to reduce losses.

3 aircraft from the Kanoya Ku attempted a dawn raid on Chui-chiang on the 20th, but the difficulties inherent in this new approach became obvious immediately, when the formation struggled to find the target during the pre-dawn approach. Dusk airfield strikes carried out the following day by both units of the 1st proved equally problematic, with the Kanoya failing to hit one of their targets and the Kisarazu losing 4 G3Ms near Chu-chou and Yang-chou airfields – including an entire attack group of 3 planes that disappeared without trace, presumably falling to Chinese Hawks.

On the 22nd the Kanoya Ku was grounded by poor weather on Formosa, so it was left to the Kisarazu Ku to attempt the first night bombing of the campaign. Results were again poor as the Type 96s failed to find their target in Nanking, as enemy searchlights found the bombers and dazzled the crews. The next night, 2 G3Ms again failed to find their target and instead released their bombs indiscriminately over the city.

On the 24th of August, in a night raid, the Kisarazu took to the air and succeeded in destroying Chinese aircraft on the ground – 6 G3Ms managed to destroy three fighters at Da Jiao-Chang airport. Chinese fighters attempted to intercept despite the late hour, necessitating covering of engine exhaust flames to lessen the chance of night-flying Hawks discovering the bombers on future efforts. At the same time, the Kanoya Ku hit Yen-ichi and Ningpo airfields using a mix of 250 and 60 kg bombs which allowed them to saturate a wider area than the usual load of two 250kg weapons.

By late August the Chinese Air Force was largely a spent force in the Shanghai area, and as a result future raids rarely saw interference from more than a single fighter. The Kanoya Ku lost a Type 96 during a night raid on Nanking on the 27th of August, which was the final combat loss of one of the ‘rikkos’ over Shanghai. The air groups had each lost eight aircraft, a total of 16 out of 38 or 42% of the force, and many more had been damaged, in less than two weeks of operations against the Chinese. Most of the bombers had gone down with their entire crews, because the airmen refused to wear parachutes when flying over enemy territory for fear of being captured. Most distressing was the Type 96’s propensity to catch fire when attacked, which gave an early demonstration of the inability of Japanese aircraft designs to deal with heavy combat damage. Damage to targets on the ground had been far less than was hoped for due to the limited number of bombs carried by the G3M and the small formations used by the Japanese.

Operation 100: The Bombing of Chungking