By September 1937, the progress of the war was beginning to take shape after the confusing initial forays in Shanghai. Additional Japanese troops had landed on the banks of the Yangtze and had begun to encircle Chinese troops, providing much needed relief for the small force of soldiers and marines that had bene landed from the Izumo and other ships near the International Concession. Constant Japanese air attacks had badly wounded the Chinese Air Force, leaving it with only 25 working fighters and compelling it to abandon the city and fall back to bases around Nanking, the ancient capital. It was this remaining fighter force that the IJNAF now planned to destroy.

The Japanese could count on the appearance of new fighter which they hoped would deliver a ‘decisive blow’ to the Chinese. This was the Mitsubishi A5M Type 96 carrier fighter, designed by Jiro Horikoshi (who would later go on to design the A6M “Zero”). The A5M was the first ever monoplane carrier fighter, and was much faster than the Hawk IIIs with a top speed of almost 280mph. The first A5Ms flew missions over Shanghai at the beginning of September from the carrier Kaga, but with the capture of suitable airfields the 2nd Rengo Kokutai (2nd Combined Airgroup), consisting of the 12th and 13th Kokutai, could begin operating the type from land bases.

Initially the 2nd Rengo Ku suffered because Kunda airfield, where they were based, suffered from the poor weather and was often unusable. Nevertheless the bombers and fighters of the 12th and 13th were soon carrying out effective bombing and reconnaissance raids as the Chinese continued to contest the Japanese occupation of Shanghai. 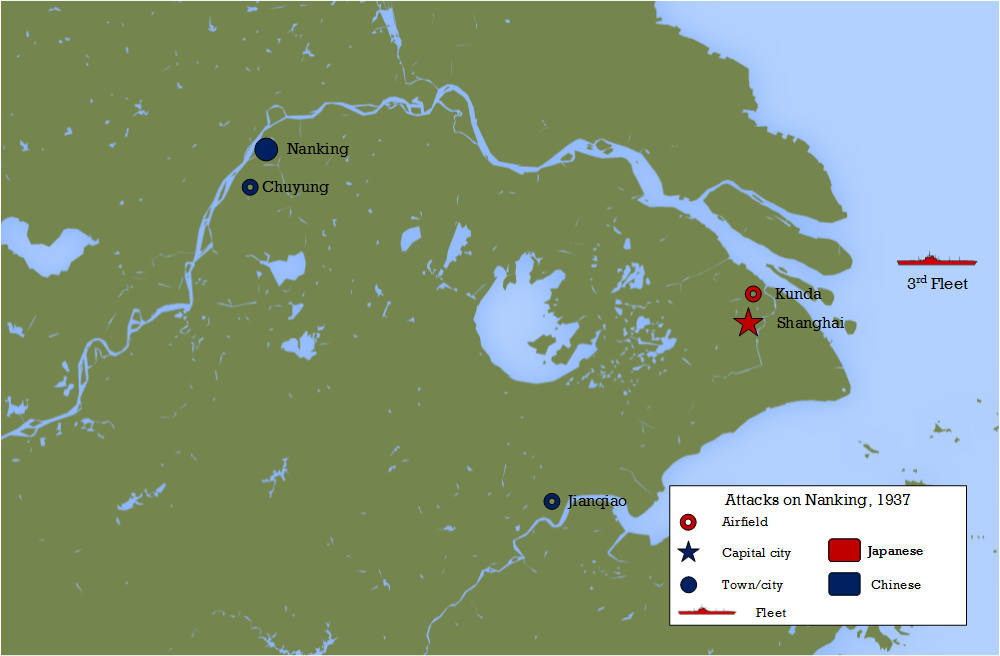 Although the CAF had pulled back to Nanking, its fighters still posed a threat to both the 1st Rengo Ku’s G3M medium bombers and the 2nd Rengo Ku’s single-engined types. Indeed, Hawks had claimed a pair of Kaga D1A carrier bombers on the 7th of September. Therefore RAdm Minabe, commander of the 2nd, ordered a series of attacks on the city, designed to draw the Hawks into combat and allow the superior A5Ms to destroy them. 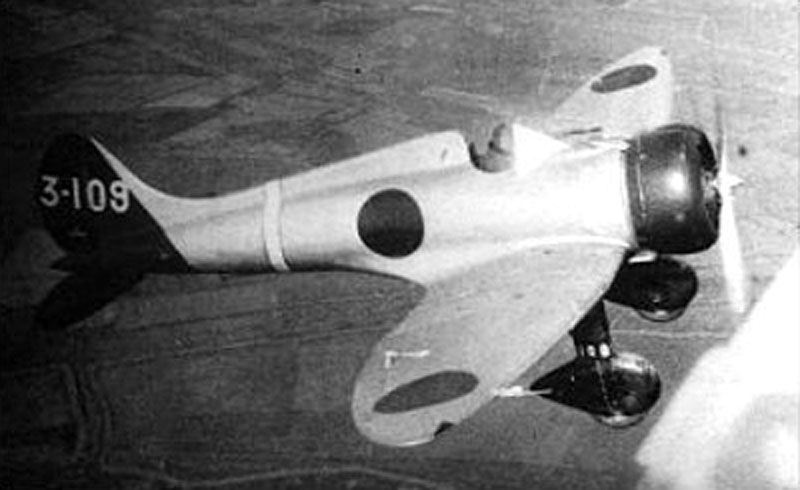 The first of these raids occurred on the 19th of September. It was a huge effort, with 19 bombers from the 12th and 13th Ku, led by LtCdr Tetsujiro Wada, escorted by 12 land-based A5Ms under Lt Shichitaro Yamashita assisted by 3 Kaga A5Ms, with close escort for the bombers provided by 16 E8N Type 95 reconnaissance seaplanes (again proving their worth as auxiliary fighters). The target was Chuyung airfield and the nearby arsenal, which were both hit with ‘considerable damage’ reported by the bombers. However, the most important damage was done to the Chinese interceptors that attempted to interfere with the attack. 16 Hawks, 5 Boeing 281s and a pair of Italian-made CR.32s tangled with the A5Ms and E8Ns in a confused melee. 3 bombers and an E8N were shot down, the only confirmed victories of around 11 claimed by the Chinese fighters. The Japanese, on the other hand, claimed no less than 33 enemy aircraft (more than were present), including a pair each by PO1c Kiyoto Koga, PO1c Tadashi Torakuma, and WO Toshiyuki Sueda – all future aces. Four Chinese pilots were killed and several more wounded as 11 aircraft failed to return or were damaged. Only a single A5M was lost, but the pilot was recovered after ditching his damaged plane into the Yangtze.

A second raid later that day, consisting of 11 carrier bombers escorted by a total of 21 A5M fighters and E8N seaplanes, failed to add to the score despite an interception attempt by 9 Chinese fighters. On the following day, another big raid by 41 aircraft was engaged by a handful of the remaining Hawks before it arrived over the target. Although a gunner on one of the bombers was killed during the attack, none of the Japanese aircraft were badly damaged and another four Chinese planes were claimed shot down, 3 by Kaga’s PO1c Watari Handa. Already the Japanese strategy appeared to be working as the ability of the CAF to deal with attacks on Nanking was greatly diminished.

On the 22nd of September, three raids were mounted, but again Chinese resistance was low. During the first of these raids the CAF fighters fled after a brief combat; during the second one Boeing 281 and four Hawks managed to shoot down a bomber before the A5Ms could respond by downing four of the interceptors (including another 2 by PO1c Koga); during the third, no enemy air presence was seen at all. On the 25th a total of 5 raids were launched against Nanking. Chinese fighters were occasionally sighted during the day, but all fled upon sighting the A5Ms and none were shot down.

The only black mark for the Japanese occurred on the 26th of September. The leader of the 13th Ku fighter unit, Lt Shinchiro Yamashita, was undertaking a solo reconnaissance mission in his A5M when he was surprised and shot down by a Hawk III piloted by Capt Lo Ying-The of the 5th Pursuit Group. Although Yamashita survived his crash landing, both he and his aircraft were captured by the Chinese. The A5M was shipped to the Soviet Union for examination and testing by aeronautical engineers, whilst Yamashita was to die in captivity.

The End of the Hawks

In total during a week of attacks the 2nd Rengo Kokutai, with support from carrier based A5Ms that staged through Kunda, mounted a total of 249 sorties against Nanking. These were some of the largest aerial battles ever known up to this time, eclipsing dogfights during the First World War. Pilots claimed a total of 48 enemy fighters shot down (including 12 by E8N seaplanes) which was an obvious exaggeration of the number actually destroyed but nevertheless represented the destruction of Chinese air power over the city. The raids were an early example of the unintended benefits of sustained raids with heavy escort, in that the most valuable contribution was often to draw the enemy air force into the air where it could be destroyed more easily than was possible by bombing it on the ground.

Newsreel: Sinking of the USS Panay