Task Force 17 was not the only carrier force to be striking the enemy on the 7th of May. The Japanese MO Striking Force, tasked with supporting the MO Invasion Force as it approached Port Moresby, was in what it believed was the ideal position to attack the elusive American carriers. Although the Striking Force, with the carriers Zuikaku and Shokaku, was nominally under the command of VAdm Takeo Takagi he had little experience in air matters and had delegated control to RAdm Chuichi Hara – an aggressive aviation specialist who had earned the nickname ‘King Kong’ due to his size and stature.

At dawn on the 7th Hara’s carriers were due south of New Georgia in the Solomons, well to the east of the Louisades. The Striking Force was therefore well out of direct support range of the ships heading for Port Moresby, but Hara was sure the Americans would be further to the south, in the Coral Sea, and not in a position to threaten the transports. To confirm his suspicions, he sent out a search of 12 B5N Type 97 aircraft to cover the area to the south of his force, hoping to find the carriers that had struck Tulagi a few days before.

Hara’s intuition appeared to be correct when, at 0722, one of the search planes radioed back a contact report, which was followed up with details of the American force– a carrier, escorted by a cruiser, 160 miles south of MO Striking Force. This was amplified shortly afterwards with 3 destroyers also reported, and a second plane radioed another report of an oiler escorted by a single destroyer in the same area. Clearly, this was the American task force that Hara had been hunting for the last several days. At 0800 the Japanese strike planes began to take off to sink this carrier – 36 D3A Type 99 dive bombers, 24 torpedo-armed B5Ns, and an escort of 18 A6M Zeros. The leader of this formation was LtCdr Kakuichi Takahashi, a veteran dive bomber pilot from the Shokaku. 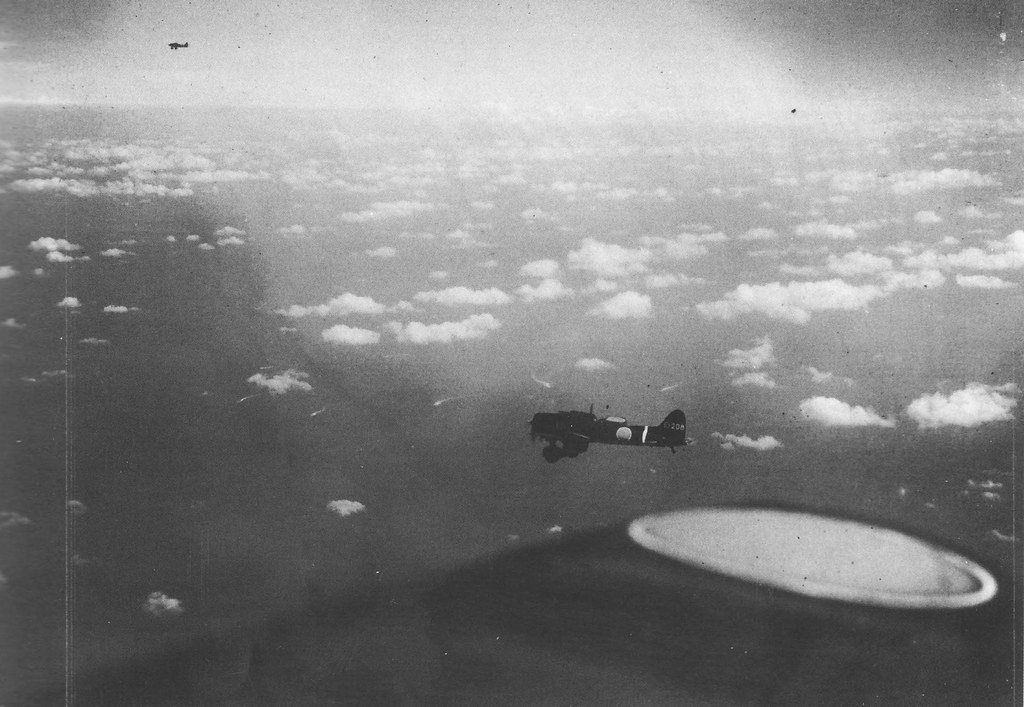 Actually, there was no carrier at the reported position. Both of the search planes had sighted the same ships, but only the second report was accurate – what the crews had discovered was in fact Cdr John Phillips’ oiler Neosho, escorted by the destroyer Sims, under LtCdr Wilford Hyman. After completing refuelling of main force, this little flotilla had been sent to supposedly safe waters in the south whilst Fletcher’s Task Force 17 dealt with the Japanese invasion force. Hara’s decision to enter these same waters had put the Neosho and Sims in a very dangerous position, far away from the protection of Fletcher’s flight decks. Ominously, lookouts on the oiler spotted two aircraft on the morning of the 7th but they were too far away to identify as either friendly or hostile. These would be the first of many aerial contacts throughout the morning.

About half an hour after the mysterious aircraft were sighted, an attack was made with no warning. An aircraft appeared from nowhere, and dropped a single bomb near the Sims. The weapon exploded 100ft from the destroyer, which knocked Captain Hyman off his feet and may have concussed him. One crewman was also injured by shrapnel. Astern of the Sims, Neosho increased to close to her maximum speed, 18 knots, and went to General Quarters with all weapons manned. Now there was no doubt that the unidentified aircraft were hostile – in fact, this aircraft was an advanced scout for the incoming attack group, tasked by Hara with finding and verifying the previously reported contact.

The now alert lookouts on the American ships spotted a larger formation of incoming aircraft at 0905, around 15 planes. This came in from the north but did not attack, instead keeping their distance. This was Takahashi’s attack group, which arrived in the area to discover the Sims and Neosho, but there was no sign of an American carrier or any of its escorts. Takahashi ordered his aircraft to split up into search/strike teams and find these other ships. For the next 90 minutes these teams criss-crossed the seas looking for the elusive flattop, but it was not to be found. Instead, at 1051 Takahashi radioed back that the contact must have been in error, and no carrier was in the area. Hara, enraged, ordered the attack force back to base. To compound their error, the two search B5Ns that had made the incorrect reports got lost and ended up ditching their aircraft on Indispensible Reef, south of Rennell Island. 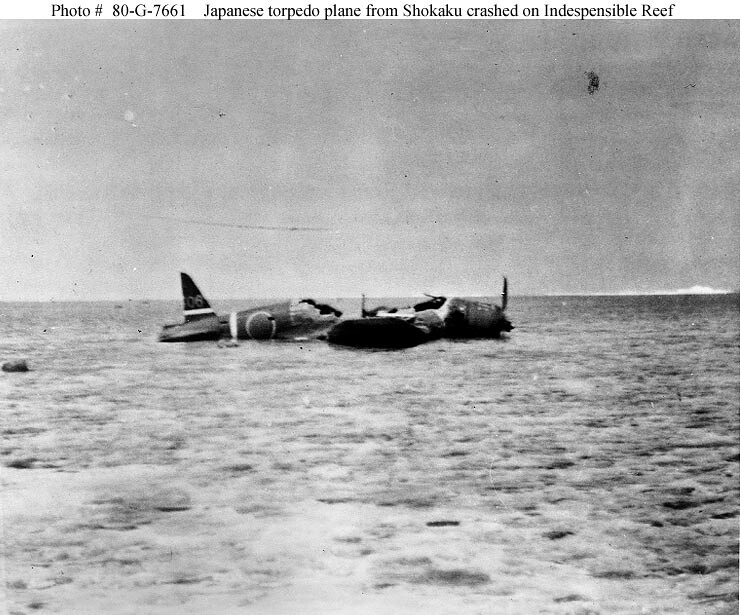 Hoping to achieve something from the mornings debacle, Takahashi intended to attack the American ship with his dive-bombers whilst sending his torpedo-armed aircraft back to their carriers. A group of bombers had already made one run on the Neosho, when three bombs were dropped, but smart manoeuvring saved the oiler from damage. Now, with the B5Ns heading home, the remaining D3As would go into the attack. As the bombers approached, the Sims managed to shoot one down with a direct hit which caused the Aichi to explode in mid-air, pieces raining down on the ocean.

Takahashi himself led the first group of four dive bombers, selecting the more dangerous Sims as his target, and screamed in. Their aim was excellent, with three bombs striking the destroyer. One of these penetrated the engine room and detonated one of the boilers, causing a catastrophic explosion that almost ripped the destroyer in half. The two halves of the ship sank in minutes, with her colours still flying and her gun mounts still firing. Many of the crew were killed immediately, and others who ended up in the water were killed when the Sims’ depth charges exploded. Later, only 15 of her crew of 252 were rescued alive – none of the officers survived.

The remaining bombers focussed on the Neosho, subjecting her to several individual attacks. The first wave of three D3As swept in and dropped their bombs – all missed, but they were very close. A second wave soon followed but again the Neosho turned away and no hits were scored. One D3A was hit by anti-aircraft fire, either from the oiler or from the still-firing Sims, but the pilot retained enough control to be able to direct his aircraft into a crash-dive on the Neosho. The flaming debris hit the ship’s number four 3-inch gun mount, kill or wounded most of the crew and putting the weapon out of action. Several life rafts were also burnt by the subsequent fire, rendering them useless. 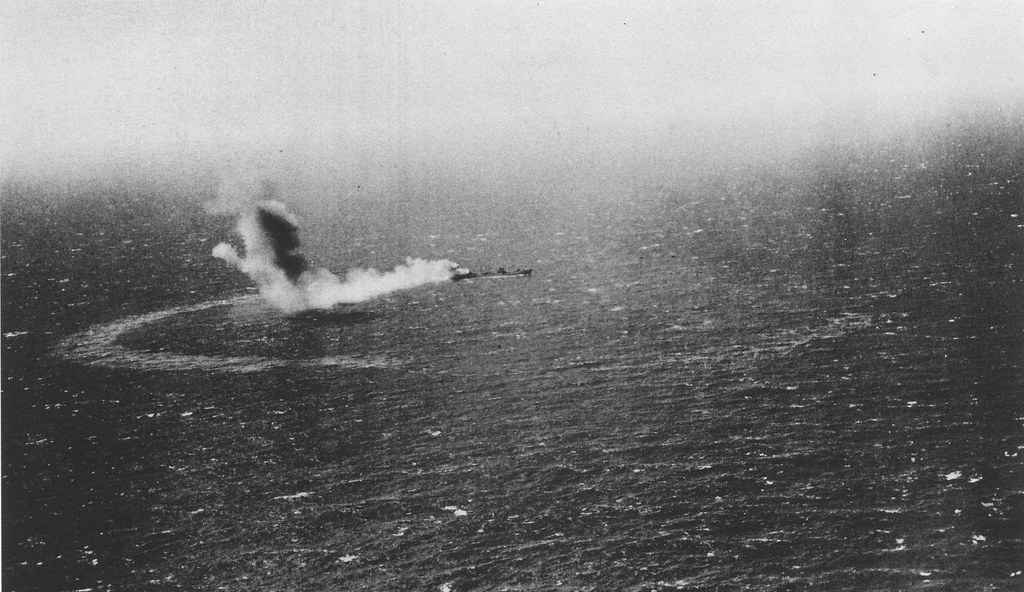 Thereafter, with anti-aircraft fire from both ships greatly diminished, the Japanese began to find their mark. The first hit on the Neosho was scored on her main deck, quickly followed by a second that detonated in one of the bunker compartments, igniting the oil there. Another hit the ship’s fire room, killing all of the occupants and releasing superheated steam into the compartment. Three other bombs hit the fuel storage tanks, now mostly empty, exposing them to the sea and allowing fuel oil to escape. The engines soon lost power and the oiler was reduced to a drifting hulk. Their job done, the Japanese turned to the north to begin the long flight back to their carriers.

Confusion reigned on the Neosho. Captain Phillips had passed an order to “prepare to Abandon Ship” but some of the crew heard, or chose to hear, the order to abandon immediately. Many men therefore made a bee-line for the ships remaining life rafts and boats, launching them without orders from the ship’s senior officers. Other men jumped directly into the water, many of them with wounds. In total around 68 men made it into the boats, which soon began to drift away from the still-afloat oiler. Other men were plucked from the water and returned to the ship, including the survivors of the Sims.

Assessing the damage to his vessel, Phillips realised it was taking on water but was not in immediate danger of sinking. A number of fires raged, but firefighting teams were working on quelling the flames and before long all were under control. Flooding had induced a list which got gradually worse, with the starboard side soon completely submerged, but the buoyancy of the almost empty fuel tanks heled to keep the Neosho afloat. Radio messages had been sent out constantly during the attack, and even with the oiler dead in the water a final message was sent using auxiliary power, giving the ship’s location. By nightfall, the situation appeared to have stabilised and the crew began to hope that rescue forces may be arriving before too long. 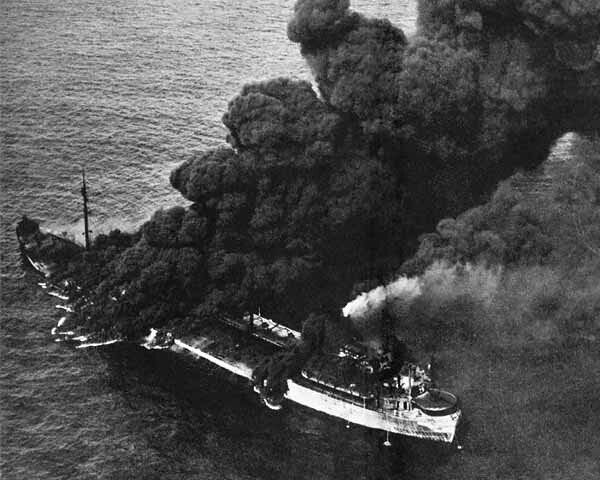 That proved to be a vain hope, however. With Task Force 17 heavily engaged with the Japanese the following day, there was no chance of significant help coming from that quarter, although Fletcher did send the destroyer Monaghan to assist the Neosho. However, the location co-ordinates sent out in the distress calls had been miscalculated, and the Monaghan was unable to find the Neosho before she had to withdraw. Subsequently, ships were sent out from New Caledonia to find the hulk, and air searches from Australia scoured the seas. The first aircraft to sight the Neosho were actually Japanese, from the carrier Zuikaku, as it attempted to re-engage the American carriers on the 10th of May.

It was not until the 11th of May, four days after the air attack, that the destroyer Henley from New Caledonia, acting on a sighting report from an Australian Hudson patrol bomber, finally found the drifting Neosho. A Catalina flying boat flying from Noumea was working in tandem with the Henley and helped the destroyer track down the elusive wreck, and visual contact was finally made at 1323 on the 11th. Just 109 men from the original complement of 293 were still alive, along with perhaps 14 men from the Sims. When the last man was taken off, the Henley withdrew to a safe distance and launched two torpedoes which failed to sink the oiler, before finishing her off with gunfire. The gallant Neosho finally sank at 1522.

Four other men were discovered in a life raft by the destroyer Helm on the 16th of May. These men were the only survivors of the 68 men who had abandoned the Neosho on the 7th. Several of the rescued men subsequently died before they could be taken to hospital in Noumea, including Chief Watertender Oscar Peterson, who would later receive a posthumous Medal of Honor for his efforts working in the steam-filled compartments of the Neosho, and two of the survivors picked up by the Helm.

Thus ended the saga of the Neosho and Sims, and their role in the Battle of the Coral Sea. Both sides had sent strike forces to sink what they thought were the enemy’s major combatant ships on the 7th of May, and both in fact ended up sinking ships of the support forces. The following day the two forces would finally find each other, and the first true carrier-versus-carrier battle of the war would unfold.

The Action off Misima