Although the Japanese had successfully eliminated most Chinese air opposition in Southern China during the autumn of 1937, shipments of new aircraft from foreign partners continued to arrive in the area. American, British, German and Italian models were either arriving by ship at Hong Kong or Canton harbours, by train from Indochina, or flying over the Himalayas from Burma into the southern city of Kunming. With the Kuomintang showing no signs of capitulating after the fall of Nanking, the Japanese began to plan a series of operations which would seal off Chinese ports to foreign imports and put Japanese air groups in a position to threaten the supply route from the south. The Chinese meanwhile used their imported aircraft to rebuild air strength in the south and challenge the invaders again.

After the aircraft carrier Kaga completed her cruise in southern waters in late 1937, responsibility for keeping the skies clear of Chinese aircraft and suppressing activity around Canton fell to the seaplane tenders of the 3rd Fleet. Arriving in late 1937 were the auxiliary tender Kagu Maru, accompanied by the heavy cruiser Myoko, between them the two ships carrying around 20 E7K and E8N floatplanes. A pair of these planes, carrying out a bombing raid on the city of Nanning in early January, were intercepted by an estimated 10 enemy Hawks, and claimed to have shot down no less than 7 without loss.

To help surround and isolate Canton, the Japanese planned an operation to seize the island of Sanzao Dao near Portuguese Macao. There were only minor Chinese forces on the island and so Special Naval Landing Force had no problems in taking control. They began to construct an airfield, using the native population as effectively slave labour.

On February 24th the tenders Notoro and Kinugasa Maru launched an attack on the town of Nanhsiung where 12 E8Ns encountered a superior force of fighters, claiming to have shot down another 8 Hawks – 3 by Lt. Kunihiro Iwaka, who suffered a wound to the leg and whose observer was killed in the attack – losing two floatplanes in the process. The E8Ns had encountered the newly obtained Gloster Gladiators of the 5th Pursuit Group’s 28th and 29th Pursuit Squadrons, led by the 29th’s Wong Sun-Shui. Despite experiencing problems with the guns on their fighters, the Chinese tore into the E8Ns, claiming to have shot down two but losing two of their new fighters in the process. Further encounters during February included a claim by Wong Sun-Shui to have shot down another E8N in defence of the railway between Kowloon, in British controlled Hong Kong, and Canton.

Concerned about the continued Chinese resistance, the Japanese tasked the carriers Kaga, Soryu and Ryujo with destroying the resurgent Chinese Air Force. The Kaga launched a raid on Tien Ho airfield near Canton on the 13th April, with 6 fighters escort and 18 D1A bombers. Chinese observers reported the incoming raid so there was plenty of time to scramble the Gladiators, which patrolled over Canton waiting for the attackers. Spotting the Japanese formation, the Chinese immediately fell on the dive bombers, with one going down in flames during the first pass. The Kaga fighters, half of which were A4N biplanes, tried to intervene but themselves suffered the loss of one machine as the Gladiators fought back. Likewise a pair of A5Ms was claimed. Another D1A was claimed before the Japanese fighters began to assert themselves. In total the Chinese claimed to have shot down 9 Japanese planes but only found four wrecks near the scene of the battle, with the Japanese claiming to have shot down 15 Gladiators – actually only four were shot down.

The Japanese inaugurated a series of landings to consolidate their control of the coast before they attempted to move on Canton itself. Landings were conducted at Amoy, on the other side of the Formosa Straits from the island itself. The 3rd Fleet seaplane tenders Kamoi and Kamikawa Maru provided air support with their floatplanes. The landings were opposed only by a second-string Chinese force which was soon overrun by the SNLF troops with supporting gunfire from destroyers. The Japanese caused a diplomatic incident when they attempted to march on and occupy the city’s international settlement, where tens of thousands of Chinese civilians were fleeing to. The result was a furious response from the British, French and Americans, who all dispatched naval forces to the city. This forced the Japanese to back down. The incident highlighted the growing tensions that the Japanese advance southward caused with the major powers with interests in the area. 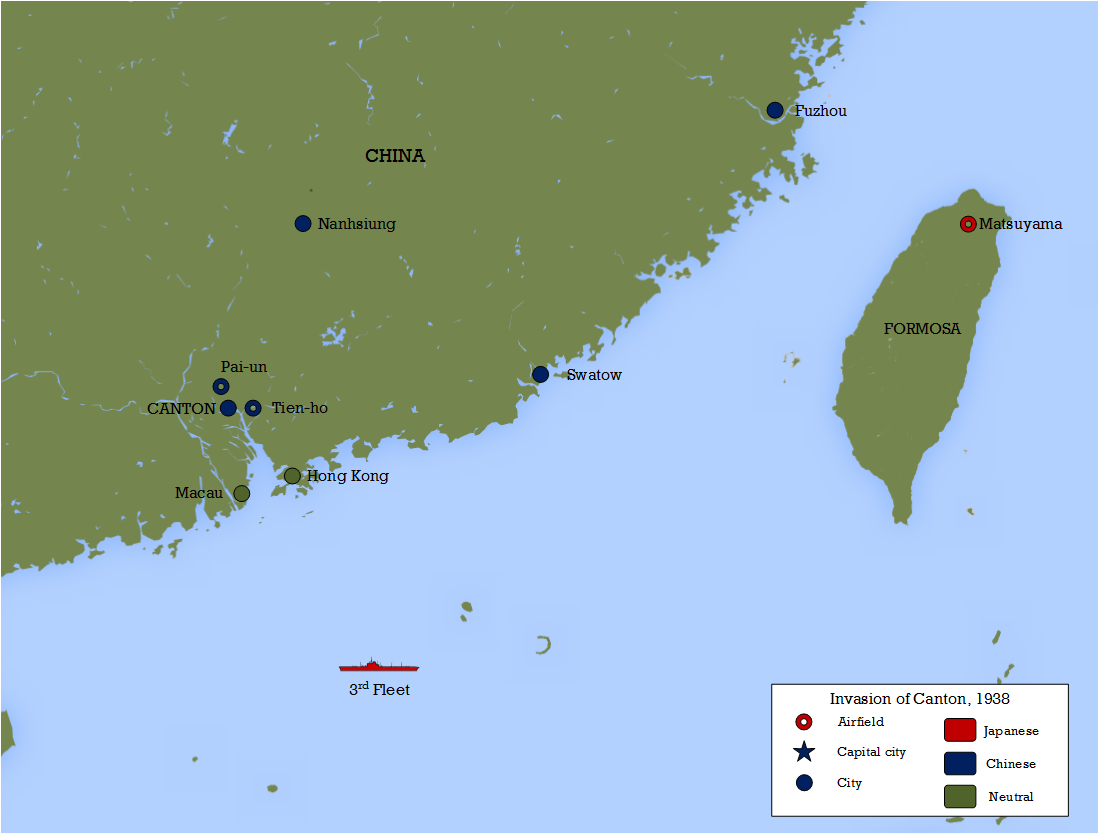 In early May the Sanzao Dao airfield was completed. The Japanese, no longer requiring the services of the civilians who had constructed the field, promptly executed around 3,000 of them, to add to the various atrocities they had committed during the Central China campaign. The newly formed 14th Kokutai flew into the base with A5M fighters and D1A bombers. In addition the Takao Kokutai, with their 18 G3Ms, was available to carry out bombing missions from their base on Formosa. On the 16th of June the Takao Ku joined in the attacks on the Canton region, sending six of their machines to Nanhsiung. The 5th Pursuit Group put up their Gladiators to intercept, with the Chinese-American pilot John Wong claiming the lead G3M with a swooping attack that gave him a clear shot of the bomber’s belly. Hits from his machine guns caused one of the bombs hanging there to explode, destroying Lt Yoneda’s aircraft. Both of the other bombers from the leading shotai were also shot down, and the surviving G3Ms all suffered varying amounts of damage.

The Kaga and her air group were back in action in August, after a summer lull. The Chinese had been forced by the fierce air battles around Hankow to shift some of their Gladiators north, where many had been lost. As a result there were only a handful of the biplanes left. 9 of them attempted to intercept a raid by D1As on the town of Huchow, but the bombers had already completed their attacks by the time the Gladiators arrived. As a result they were moved north to Nanhsiung where a second raid was expected. Spotting more D1As, the Chinese fell upon them, claiming a total of four destroyed. The escorting A5Ms, however, countered with a series of effective attacks which shot down no less than 6 of the Gladiators – this meant that only three of the type remained available. 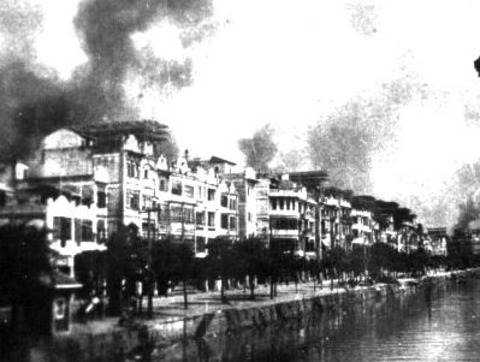 With Chinese air power in the south largely destroyed, the way was clear for the invasion of Canton. Throughout September the 14th Ku flew raids against military positions that stood between potential landing sites and the city itself. Then, on the 12th of October, the 5th Fleet of the Imperial Japanese Navy initiated landings at Bias Bay, just to the east of Hong Kong. Supporting the landings were the Kaga, Soryu and Ryujo as well as the seaplane tenders Chitose (which would eventually be converted into an aircraft carrier) and Kamikawa Maru. Here the E7K and E8N seaplanes again proved their worth as auxiliary fighters and bombers, which set the precedent for them to be used in the same role during the wider Pacific conflict.

The landings were unopposed, and a mood of panic quickly came over Canton as the population realised that the city was doomed. Fleeing the city ahead of the advancing Japanese, the authorities used the same tactic as their colleagues in Wuhan, deciding to implement a ‘scorched earth’ policy by destroying most military and governmental facilities. The city fell on the 29th of October, as Western gunboats watched on. Further landings to capture other coastal cities occurred in February 1939, when SNLF troops landed on Hainan Island, not far from the Chinese border with French Indochina, and in June 1939 when the city of Swatow was taken. These operations completed the blockage of Chinese ports and effectively left the Burma Road and the ‘Hump’ air route over the Himalayas as the only way to get supplies into China.

The Fall of Hong Kong

The Invasion of Malaya