As the fighting around Shanghai and Nanking raged, events around the southern city of Canton (now Guangdong) were conspiring to draw Japanese air and naval forces into battle in that area. Still hoping to conclude the ‘China Incident’ quickly without spreading the conflict across the entirety of China, the Japanese had no immediate plans to occupy Canton. However, a large contingent of Japanese civilians had to be evacuated from the area in August, and the Japanese navy implemented a blockade to prevent Chinese ships from leaving the Pearl River area. The blockade of Canton would eventually require heavy aerial bombardment, as the blockading ships occasionally came under attack from Chinese aircraft, which also threatened Japanese bases on Formosa.

Soon after the spread of fighting into central China, the 1st Rengo Kokutai based at Matsuyama on Formosa was provided with intercepted communications that implied that Chinese air forces might try to attack the base. Commanders at Fuzhou, one of the cities closest to Formosa, requested updated information on the Japanese air strength, including maps, on the island. The Chinese air forces around Canton were known to have a number of medium bombers on strength, including German-made Heinkel He111s, which could theoretically attack Formosa. As such, plans were drawn up for the Kanoya Ku, reinforced by 6 bombers from the Kisarazu Ku, to bomb airfields around Canton to eliminate the threat. 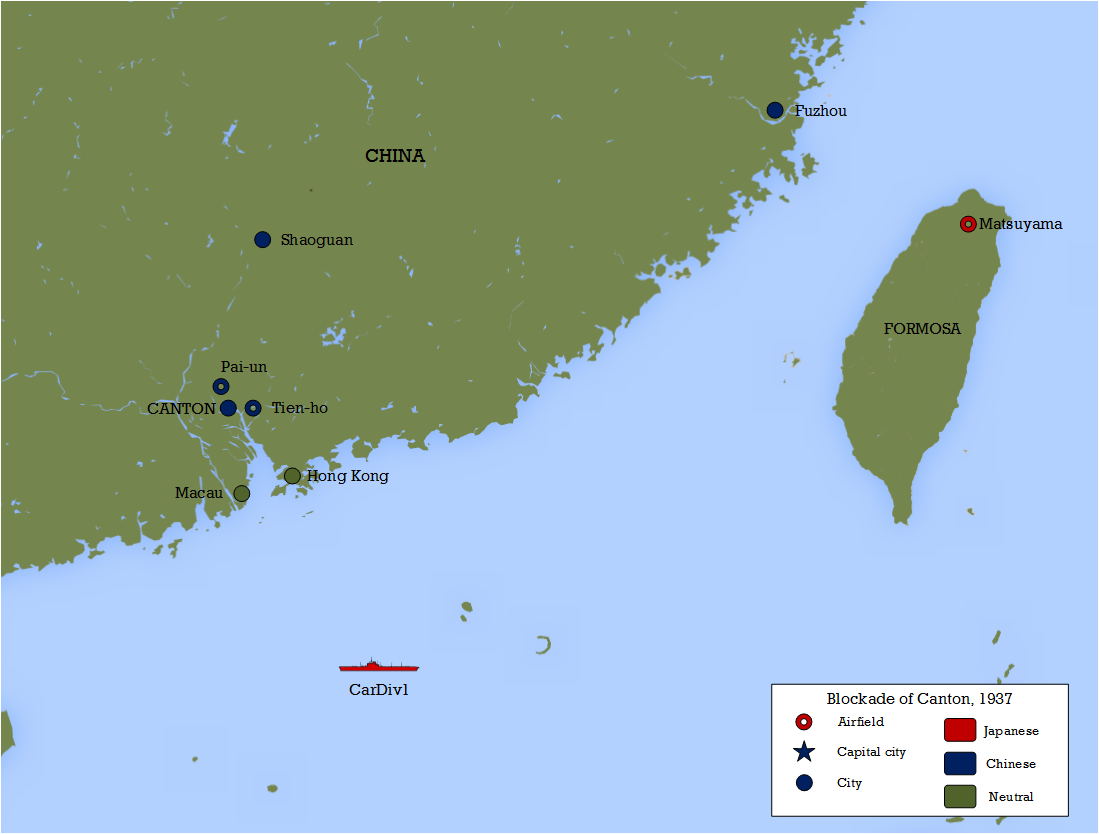 The plans included targeting the main airfields of Canton, Tien-ho and Pai-un, as well as the Shaoguan Aircraft Manufacturing Plant which produced spare parts. The 5th Destroyer Division, on blockade duty in the South China Sea, was asked to provide weather reports and local air patrols from seaplanes. The new commander of the Kanoya, LtCdr Nagaishi, would lead 12 G3Ms against Tien-ho and Pai-un whilst smaller groups went after outlying airfields and the Shaoguan works. Originally planned for the 29th of August, bad weather caused a postponement until the 31st. it would turn out to be the biggest attack by medium bombers yet.

Taking off in the pre-dawn darkness, the Type 96s headed south with the intention of carrying out an early morning raid. The Tien-ho group of 9 bombers reported destroying two aircraft on the ground and causing considerable damage to hangars and aviation facilities, and the three that bombed Pai-un reported similar success. However, Chinese interceptors of the 29th Independent Pursuit Squadron were able to get airborne and give chase, catching up with the bombers near Dongguan. One of the G3Ms was ‘flamed’ by the pursuing Hawks and went down with its entire crew, whilst the others escaped. Other attacks by groups of 2 or 3 G3Ms were reasonably successful, further damaging targets without taking losses.

Attacks by the medium bombers were then suspended, as more profitable targets were thought to exist elsewhere in China and the aircraft carriers Hosho and Ryujo were heading to the area after concluding operations in support of the Shanghai beachhead. The operational pause turned out to be a mistake, as additional Chinese air units were moved into the area and began to harass the blockading ships. On the 14th of September, several Northrop Gamma 2E light bombers attacked the 29th Destroyer Division off Hong Kong. The Chinese pilots proved no more capable than their comrades in Shanghai and did not cause appreciable damage to the warships. Later that day, the light cruiser Yubari, engaged in escorting civilians out of the area, was also attacked by a small squadron of Chinese warships. Yubari and her attendant destroyers were forced to retreat. The next day, the destroyer Kuretake was attacked but not damaged by the Northrops.

In response, the rikko were again tasked with supressing Chinese air activity in the south. Late on the 15th six Kanoya G3Ms were dispatched on a night mission against the Canton airfields. These aircraft arrived in darkness and were consequently unable to find their targets, despite searching for over an hour. Giving up, the bombers dropped their loads on what they believed was a blacked out Canton city and headed back to base. The next day, the 16th, the Kanoya Ku tried again with marginally more luck – Tien-ho was hit by six G3Ms, but three more bombers failed to find any aircraft on the ground worth bombing and so attack ‘military installations’ within Canton.

On the 20th of September Carrier Division 1 (CarDIv1), the Hosho and Ryujo, arrived in the South China Sea with their escorts. In early start to their mission was thwarted by poor weather which delayed initial strikes until the 21st. The first raid was mounted against Tien-h and Pai-un airfields, those well-known targets of the Kanoya. The carriers together put up a strong force of twelve D1A dive bombers and three B2Ms, all escorted by ten A2Ns led by the Ryujo’s fighter leader, LtCdr Yasuna Kozono. Considerable damage was done to Chinese aircraft on the ground, whilst a furious dogfight developed overhead. Hawks of the 29th IPS again met the attackers, but this time it was the Japanese who got the upper hand. In a 30-minute aerial battle, two Hawk IIIs were shot down, as were a pair of observation planes that stumbled into the fight. No Japanese aircraft were lost to Chinese opponents, but some of the A2Ns had pushed their fuel supply beyond the limit. 5 of the fighters ran out of fuel on the return trip to the Hosho and were forced to ditch into the ocean. All of the pilots were picked up by destroyers. 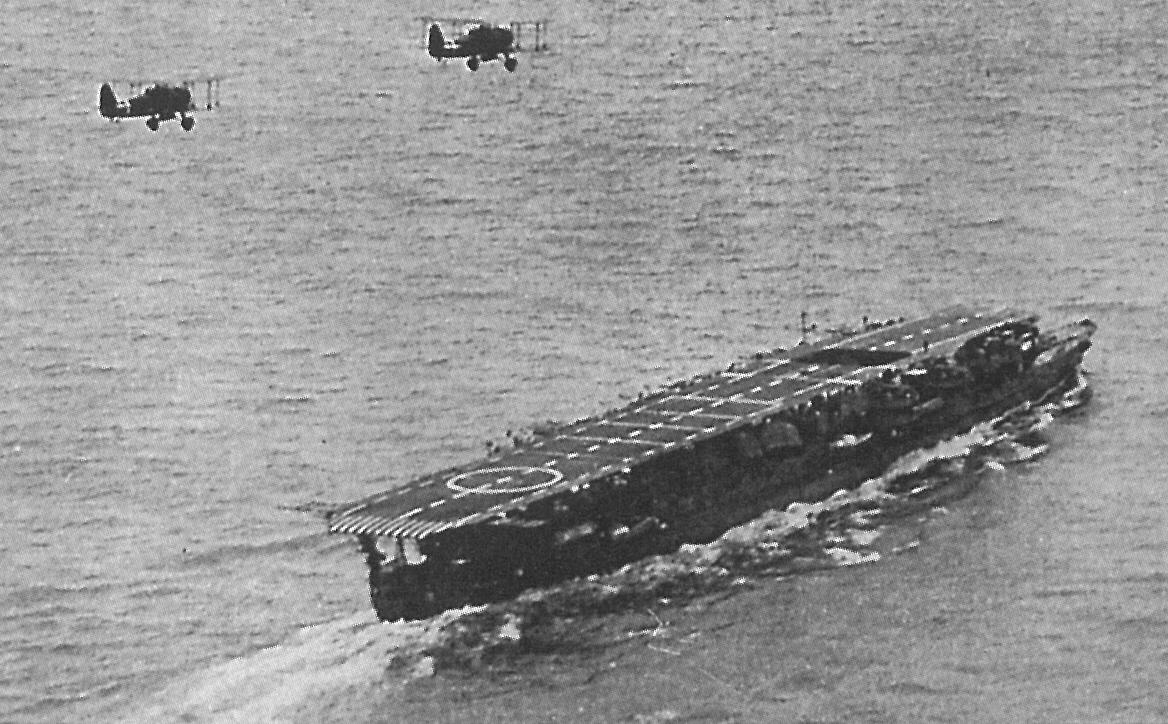 Ryujo sent 16 more D1As escorted by a further 10 A2Ns later that day. The fighters encountered more Hawks searching for the Japanese, and shot down one before successfully shepherding the bombers to their targets. More damage was done to the airfields, and two more Hawks were destroyed in the air. In total the Japanese claimed 17 aircraft shot down, whilst the Chinese admitted losing 11 in the air. Japanese intelligence later confirmed that 9 more planes were destroyed on the ground. CarDiv 1 had managed to achieve much more than the 1st Rengo Ku, highlighting the greater capability of carrier type aircraft in destroying enemy air forces. Nevertheless Kanoya G3Ms flew strikes against industrial targets on the 22nd, with carrier-launched A2Ns providing effective escort. No Chinese were seen in the air and bombing results were thought to be good.

Thereafter the 1st Rengo Ku concentrated on activities in northern and central China, whilst CarDiv1 continued to attack Chinese forces around Canton. These included a number of small warships that were based in the port city, which became favourite targets of the D1A pilots. On the 29th of September, marauding D1A pilots sank the old gunboat Wu Feng in the port. The same day they caught and sank the elderly gunboat Fu Yu, formerly a cruiser of the Portuguese Navy named Patria. The following day the protected cruiser Chao Ho, which had led the attack on the Yubari, was bombed and sunk by carrier planes. Thereafter Hosho and Ryujo returned to Japan, where both went into overhaul. Their air groups were transferred to airfields in the Shanghai area.

A few days after CarDiv1 departed, the much larger carrier Kaga arrived with her A5M fighters. Immediately launching heavy air raids on Canton, the last remaining Chinese aerial resistance was quickly swept aside. In a raid on the 7th of October, Hawk IIIs attempted to intercept a raid by 12 bombers. Two of the Chinese were quickly shot down, one by PO2c Ki’ichi Oda, another was forced to ditch his fighter, and a fourth was wounded but managed to return to base. With that, the Chinese air threat was removed – the handful of remaining fighters refused to give battle. A raid on the 9th of October was unopposed, as the Japanese bombers damaged more aircraft on the ground. The Kaga’s air group also had success against the handful of Chinese Navy ships still afloat. During an attack on the 7th of October, the sloop Hai Chow, formerly the British HMS Pentstemon, was sunk in Canton Harbor.

With that the air campaign over Canton was, for the time being, over. The Japanese Navy could withdraw its carriers for overhaul and for re-assignment to training duties, as the IJNAF sought to replace the losses it had suffered over China to date. For now, the weight of the air war in China would be borne by the land-based air groups as the Japanese Army pressed on to Nanking.