On March 26th, 1942, the Japanese Kido Butai departed from its anchorage at Staring Bay and set course for the Indian Ocean. Five of the six carriers under the command of Admiral Chuichi Nagumo were present – the Kaga had hit an uncharted reef on February 9th and, although able to remain with her sisters during the attacks on Darwin and Java, had finally been sent back to Japan for repairs. The other carriers had spent two weeks at anchor with the crews working on minor upkeep, and replacement aircraft being to delivered to bring each carrier’s air group up to full strength. Now, with the Japanese Army advancing quickly into Burma, the time was perfect for a raid into the busy shipping lanes bringing supplies to the British in India.

Facing this threat was the new commander of Royal Navy’s Eastern Fleet, Admiral James Somerville. Just a few days into the job he received intelligence of anticipated Japanese movements into the Indian Ocean, with the target believed to be Ceylon. Somerville estimated that the attack would fall on the full moon of the 1st of April, and knew that his force of three carriers (Formidable, Indomitable and the old Hermes) lacked the capability to confront the Japanese force directly. He therefore planned to stay safely out of range, and then launch a raid on the Kido Butai with his night-trained Albacore torpedo bombers.

The Fleet Air Arm was primarily responsible for the defence of Ceylon, but when Singapore fell and the situation in Burma became critical the island received reinforcements of RAF squadrons deployed from the Middle East and Europe. Several squadrons of Hawker Hurricane fighters arrived to join a handful of Royal Navy Fulmars that were already based at China Bay airfield near Trincomalee. The FAA also had two squadrons of Swordfish torpedo bombers, plus a motley collection of ancient Vickers Vildebeest and Fairey Seal biplanes. Finally, reinforcements of Catalina flying boats were rushed to Ceylon and ordered out on patrol, to search for the Japanese.

The enemy were slow to approach. Passing through the newly captured Netherlands East Indies, Kido Butai launched attacks on the radio station on Christmas Island on March 31st in support of its occupation. Nagumo’s force was preceded by Vice Admiral Jisaburo Ozawa’s Malaya Force, centred on the light carrier Ryujo with a strong force of heavy cruisers. The Malaya Force supported the capture of the undefended Andaman Islands in late March, and the H6Ks of the Toko Kokutai arrived to fly patrols from Port Blair to reconnoitre the approaches to Ceylon. One of these flying boats conducted a reconnaissance of Trincomalee, revealing the presence of several merchant ships and a destroyer. 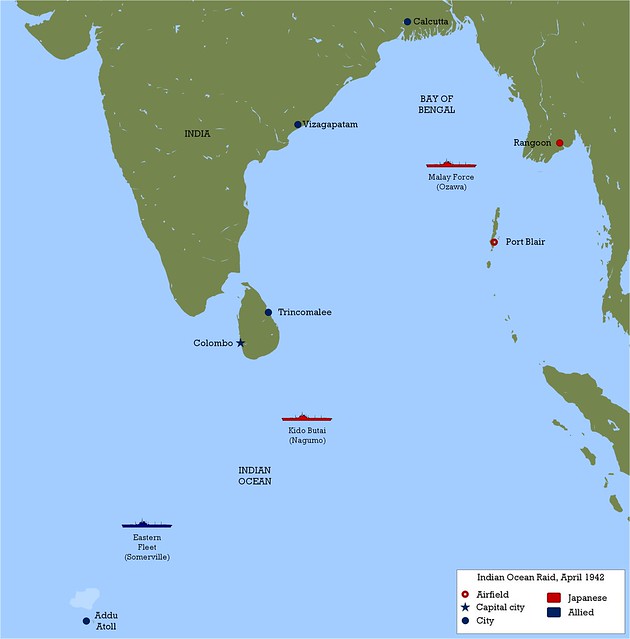 Somerville had split his fleet into a fast wing, Force A consisting off the carriers Formidable and Indomitable plus the battleship Warspite and a slow wing, Force B with the Hermes and four old R-class battleships. The British arrived within striking distance of the anticipated Japanese launch point on April Fool’s Day to find nothing of interest. As the day of the expected attack came and went, Somerville began to believe that the intelligence he had receive was faulty, or that Nagumo had cancelled the attack. Accordingly he began to disperse his forces, with the main body returning to the new anchorage at Addu atoll in the Maldives. Several other ships were ordered to return to Ceylon in preparation for further duties, including the cruisers HMS Cornwall and Dorsetshire.

In fact the Japanese were very close. On the 4th of April a PBY Catalina from 417 Squadron of the Royal Canadian Air Force, piloted by SqLdr Leonard Birchall, discovered the Japanese fleet and managed to transmit a partial message before it was shot down by patrolling Zeros. Birchall managed to put his aircraft down on the water relatively intact, but his crew were strafed as they attempted to abandon it. The 6 survivors were picked up by the destroyer Isokaze and spent the rest of the war in a PoW camp. A second Catalina was sent out to amplify the contact, it made contact and transmitted a sighting report but was then never heard from again. The Eastern Fleet was caught out of position. The alarm was raised, and all ships at Ceylon were ordered to disperse. 48 merchant ships set out to flee, but over 20 others were unable to raise steam in time to escape the impending attack.

The Attack on Colombo

The Kido Butai arrived at its planned launch point 120 miles south of Colombo at 0600 on the 5th of April. The five carriers launched a combined total of 53 B5Ns and 38 D3As, escorted by a total of 36 Zeros. Their target was the RAF airfield at Ratmalana, and any shipping still present in Colombo harbour. The British radar stations, for some reason that was never adequately explained, did not detect the raid, and as a result the RAF fighter patrols were caught out of position.

The first aircraft that the Japanese encountered were a section of 6 Swordfish torpedo bombers from 788 Squadron, which were transferring from Trincomalee to Colombo. The old biplanes had little chance against the Japanese fighters, and in the ensuing combat all of them were shot down with many of their crews being killed or suffering severe injuries. 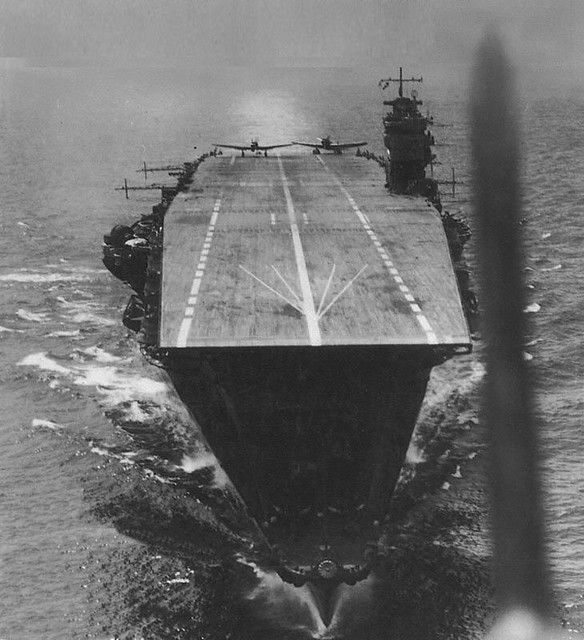 B5N taking off from Akagi

Meanwhile at Ratmalana and the nearby temporary airfield at the Colombo racecourse, RAF Hurricanes and Fleet Air Arm Fulmars were hurriedly taking off to meet the attack. The Zeros were already over Colombo and spotted the British fighters taking off – four Fulmars were immediately shot down. 258 Squadron’s Hurricanes attacked a group of D3As attacking ships in Colombo harbour, claiming at least one shot down before the escorting Zeros took the matter in hand. 9 Hurricanes failed to return to base, although two managed to force land with severe damaged. 30 Squadron meanwhile lost 8 fighters, although they claimed at least half a dozen Japanese aircraft shot down.

Despite their heavy losses, the two Hurricane squadrons largely succeeded in disrupting the Japanese attack. The dive bombers singled out the armed merchant cruiser HMS Hector and scored at least five hits which sank the ship. They also sank the destroyer HMS Tenedos, a survivor of the ill-fated Force Z sweep in December 1941. Several other ships received damage, none serious. Bombers also hit Ratmalana airfield, but aside from the losses inflicted on the British units based there the damage was negligible. Japanese losses totalled twelve aircraft, with just a single D3A pilot surviving to be captured.

The Sinking of the Cornwall and Dorsetshire

When it seemed that the Japanese were not approaching Ceylon, Admiral Somerville had despatched two of his cruisers to refuel in the port of Colombo, before they would resume escorting convoys. The two ships, HMS Cornwall and HMS Dorsetshire, arrived in port on the 4th of April. Both ships had seen extensive war service – Dorsetshire had been involved in the hunt for the German battleship Bismarck in May 1941, and Cornwall had sunk the raider Pinguin in the same month. Although both had been commissioned in the 1920s, they were the most modern cruisers in the Eastern Fleet. 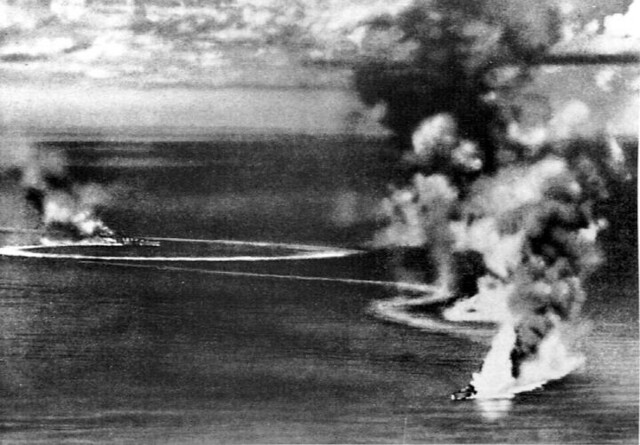 HMS Dorsetshire and Cornwall under attack

Both ships were in the process of refuelling when reports of the approaching Japanese task force were received. Hurrying to compete the process, the two cruisers left Colombo late on the 4th, but their rate of advance was limited by engine problems on the Cornwall which limited her top speed to 26 knots. When the Japanese were attacking Colombo, Cornwall and Dorsetshire were around 100 miles south of Ceylon, heading to rejoin the Eastern Fleet which was itself hurrying back from Addu. The Japanese had expected to chase down fleeing ships and had implemented an air search plan for just this eventuality. An E13A floatplane from the cruiser Tone spotted the British ships at 1100 and radioed out a contact report. A second wave with 53 D3A bombers, planned to strike Colombo in the afternoon, was instead directed to find and sink the cruisers.

The attack was swift and devastating. In vain, a distress call was sent out to Somerville requesting air support, but it could not hope to arrive in time to help. Dorsetshire was struck by at least five bombs, which destroyed her aircraft catapult, bridge and engine rooms, and jammed her rudder as well as putting all her guns out of action. The third bomb hit her magazines, and she sank in just a few minutes. Cornwall managed to survive for just a few more minutes but she suffered a total of 15 bomb hits and quickly sank. The attack had last less than 20 minutes. Over 400 men were killed, although another 1,200 survived to be picked up by the cruiser HMS Enterprise and two destroyers after spending 30 hours in the water. Not a single Japanese aircraft was lost, or even suffered significant damage. 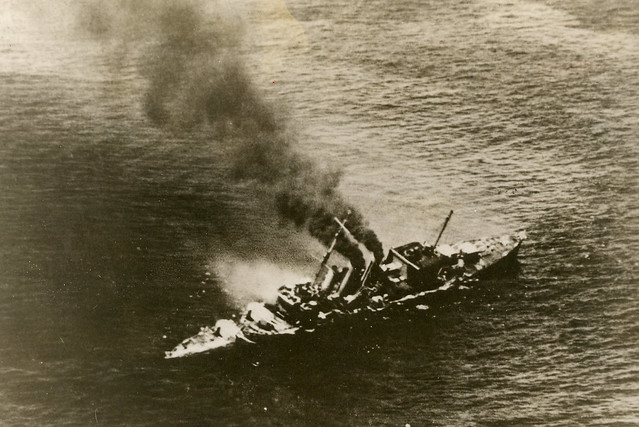 Upon receiving Birchall’s sighting report, Admiral Somerville had turned his fleet around with the intention of carrying out his planned night strikes on the Japanese carriers. As the Japanese were attacking Colombo, RAF Catalinas made contact with elements of Nagumo’s force and broadcast sighting reports. Responding to these, an attack force of Blenheims from 11 Squadron set out to launch an attack but failed to find the enemy. 827 Squadron Albacores, launched from the carrier Indomitable, also sought the Kido Butai and came across Zeros flying patrols. Two of the biplanes were shot down, whilst another escaped with a wounded pilot.

Assessing his options, Somerville realised that it would be too difficult to attack the Japanese without exposing his fleet to excessive risk. With orders to preserve his ships to maintain British sea power in the Indian Ocean, he decided that discretion was the better part of valour and once again turned to head for Addu Atoll. The plan to launch a night torpedo attack on the Japanese was shelved. Other RAF Catalinas shadowed the Kido Butai as it sailed to the south east, away from Ceylon. However, Nagumo was not finished with the island and the withdrawal was merely temporary.

German Raiders in the Indian Ocean

The Indian Ocean Raid: Bay of Bengal and Trincomalee