The Battle of Khalkin Gol, or the ‘Nomonhan Incident’ as the Japanese termed the battle, was the culmination of a series of skirmishes that had occurred along the disputed Mongolia-Manchukuo border. In 1938 Russian and Japanese troops of the Kwantung Army had fought a 2-week battle at Lake Khasan, with hundreds of casualties on each side, and since then there had been a number of smaller incidents. In one of the most dangerous areas, the Soviets believed the border was to the east of Nomonhan village, whilst the Japanese maintained that it was 10 miles further west, delineated by the Khalkhin Gol river. In May 1939, clashes between cavalry units from each side in the disputed zone escalated into an undeclared war between Japan and the Soviet Union.

Soviet air forces in the region consisted of 70th IAP (Fighter Aviation Regiment) with I-16 and I-15 fighters, and 150th SAP (Bomber Aviation Regiment) with SB-2 bombers and R-5 reconnaissance aircraft. The 38th SBAP (Fast Bomber Aviation Regiment) with SB-2s and 22nd IAP with fighters were also in Mongolia and was deployed to the front soon after the fighting began. Although their aircraft were relatively modern and had been battle tested in China and Spain, Soviet units lacked many items considered essential in contemporary air combat. Radios were not fitted to most aircraft, so aviators were forced to rely on hand signals which greatly limited the ability of unit commanders to control their subordinates. Mongolia was considered a backwater and therefore the forces assigned to the area were far from the best.

The Japanese Kwangtung Army had several of its own aviation regiments available. Eventually a total of four Hikodan, consisting of a total of ten Sentai, were brought forward as the battle unfolded. In contrast to their Soviet counterparts most of the Japanese pilots had seen some action over Northern China, and the bomber corps had only recently been recalled from the bombing offensive over Chungking. In addition to the heavy Ki-21s and BR.20s, the Japanese Army had available large numbers of light bombers, including Mitsubishi Ki-30s, Kawasaki Ki-32s, and Tachikawa Ki-36s. 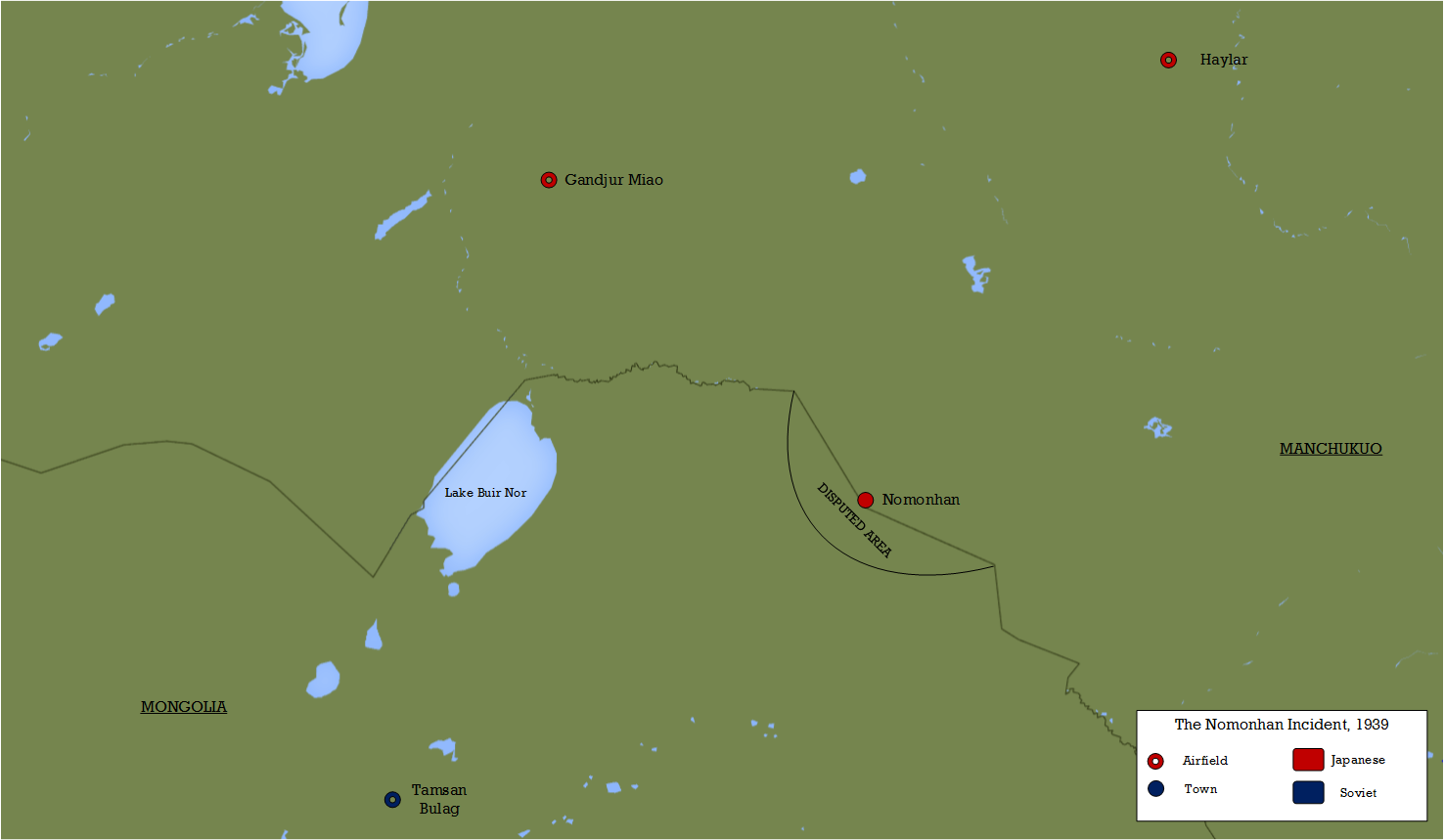 The initial aerial clashes occurred between Soviet reconnaissance aircraft, attempting to report on the movements of Japanese troops up to the border, and Japanese Army fighters. Ki-27s of the 24th Sentai claimed to have shot down a Polikarpov R-Z on the 20th of May, although this was not verified in Soviet records. The 24th claimed another, confirmed, victory over an R-Z the following day. On the 22nd, a Soviet patrol of 5 fighters met a Japanese patrol of 5 Ki-27s, and in the ensuing clash the Japanese claimed to have shot down three I-16s, although only one was actually lost. These tentative encounters would soon escalate with the ground war into much broader aerial battles as both sides shifted additional aircraft into the area- the Soviets shifted the 22nd IAP forward during the opening days of the conflict.

Aerial action picked up in late May. On the 27th a formation of 8 I-16s led by Polkovnik T. Kutsevalov patrolled along the disputed border, where they soon encountered 11th Sentai Ki-27s. The Japanese had the height advantage and made excellent use of it, quickly shooting down three of the I-16s with two others crash landing due to engine failures. The next day the Japanese conducted a reconnaissance in force with over 40 aircraft making attacks all along the border area in conjunction with a surprise ground offensive by the army. Soviet fighters were scrambled in response but suffered terribly due to poor coordination – the biplane I-15s were often late to get into the air and were left behind by the I-16s, which spelled disaster when the Japanese encountered the older type. More than a dozen were shot down by marauding Ki-27s during the day, as the 11th Sentai claimed a total of 42 enemy aircraft destroyed with only a single fighter lost to the enemy. The Japanese were quickly gaining control of the air.

The Soviet High Command took note of this difficult situation. The Spanish Civil War had recently ended with the Soviet-backed Republican forces defeated, and Stalin could not afford another embarrassing failure. Therefore, a group of veterans with experience of the air wars in China and Spain was assembled and despatched to Mongolia. These experts, posted to 22 IAP and 70 IAP, quickly made changes to the tactics employed by the I-15 and I-16 fighters, as well as stripping out unnecessary equipment to lighten the aircraft. The Japanese for their part used a temporary lull in the fighting in early June to bring forward fresh units and move them forward to new airfields closer to the front. 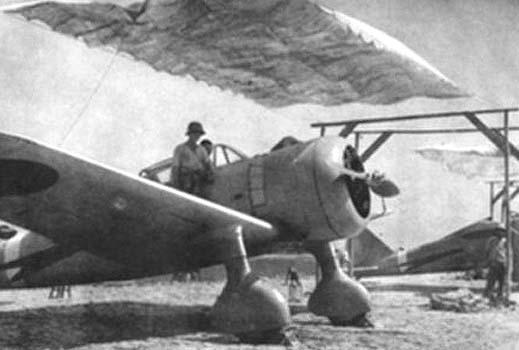 With fresh Soviet forces ready to re-assert themselves in defence of the border, in mid-June their fighters began to mount additional patrols that resulted in constant skirmishes. In response the IJAAF was ordered to move its fighter units forward, setting the stage for some of the biggest encounters yet in the conflict. On the afternoon of the 22nd of June, Ki-27s were sent out in force to probe the border defenses and protect Japanese reconnaissance aircraft that were being harassed by the Soviets. I-15s and I-16s were also launched in numbers, with the two opponents meeting in a confused melee near Buir-Nur Lake. The Japanese had the height advantage and it told, as eight I-15s and several I-16s were lost to the Nakajimas. Responding to this encounter both sides launched more fighters, with the Soviets crossing the border in several waves, forcing the Japanese to rise to intercept. The 24th managed to ambush the first Soviet wave, claiming 19 destroyed, but thereafter the battles were waged more evenly. For over two hours there was intensive action, the Soviets ultimately claiming to have destroyed over 30 enemy aircraft, and the Japanese 50 – both considerably higher than admitted losses on each side. More important was the fact that the Soviets had been able to hold their own in combat with the Ki-27s.

Concerned at the stiff Soviet resistance, the Japanese launched special reconnaissance missions to gather information of the enemy’s air strength. Alarmingly, over 200 Soviet aircraft were spotted behind the lines, mainly at the airbase complex of Tamsag-Bulak – including some of the giant TB-3 bombers. Accordingly, a strike mission was organised with the Japanese heavy bomber force of Ki-21s and BR.20 supported by Ki-30 light bombers and a heavy escort of Ki-27s. The attack was launched on the 27th of June. The Ki-27 force swooped down to prevent the Soviet fighters from taking off and catching the bombers, leaving the Ki-21s and BR.20s free to drop their bombs in a leisurely fashion from high altitude, free from interference. The aircraft of Colonel Kiso Mikami, commanding the 61st Sentai’s Ki-21s, was hit by flak and forced to crash land not far from the target. In a daring rescue, another bomber landed on the steppe to retrieve the downed crew. Bombing results were impressive, although the Soviets admitted losing only a third of the 49 aircraft claimed destroyed on the ground by the Japanese, plus almost 100 in the air – including 11 victories by Warrant Officer Hiromiti Shinohara.

The success of the bombing raid buoyed Japanese hopes as they prepared for a land offensive designed to envelope and destroy the Soviet forces in the area. The major assault was authorised in late June, with the goal of ‘expelling the invaders’ from the disputed area. Japanese air forces were restricted to operations over Khalkhin Gol river, preventing them from carrying out more raids on Mongolian territory. The attack was launched on the 2nd of July with an attempt to ford the Khalkhin Gol. Air forces were very much in evidence over the front, with Japanese bombers hitting Soviet troops and SB-2s retaliating in kind by bombing lightly defended lines of communication in the Japanese rear. On the 3rd another large aerial battle was joined as the Japanese sought to eliminate the threat posed by patrolling SB-2s and R-5 reconnaissance craft, which were supporting a Soviet counterattack. I-15s were also pressed into the attack as light bombers, with heavy escort from I-16s. The Soviets were for the first time able to claim victory in the air, as they claimed over 30 enemy shot down for the loss of on I-16 and one SB-2.

Seeking to regain the initiative the 1st, 11th and 24th Sentai were again called upon the next day, as SB-2 raids continued unabated. Attempting to fend of the constant attacks, the Ki-27s were involved in fierce combat which sometimes continued on the ground as pilots parachuted or made their escape from crashed aircraft. In the end the Japanese managed to overcome the reverse suffered on the 3rd and regain control of the air. The Soviet ground counterattack, meanwhile, was proving successful as the Japanese were forced back across the Khalkhin Gol – a victory which was loudly proclaimed by Soviet propaganda. To compound the Japanese’ misery at the defeat, the small Soviet force of Tupolev TB-3s was pressed into action as night bombing raids were instituted – the actual results being far less impressive than the psychological value of 250kg bombs falling near Japanese positions. SB-2s of the 38th SBAP also harried the retreating Japanese columns during the day.

Further surprises were to come the way of the Japanese in early July as the first Soviet I-153s began to arrive. These aircraft were an improved version of the I-15 and were initial mistaken for the older type by Ki-27 pilots. They made an immediate impact by surprising a group of complacent Ki-27s, who swooped in to attack the supposedly inferior fighters before the Soviets turned the tables and shot down 4 of the Nakajimas without loss. In addition to the arrival of the I-153s a number of improved I-16s with 20mm cannon arrived.

As the Kwantung Army reorganised itself following the failed assault, both sides carried out small harassing air raids. SB-2s made repeated incursions over the border, and Japanese Ki-21s, Ki-30s and Ki-36s replied in kind. Fighters from both sides were in constant action during these period, with fantastic claims of many enemy shot down bearing little relation to the actual losses.  During these battles WO Mamoru Hanada, an ace with 17 victories to his name, was hit in the thigh by a bullet. Managing to return to base he was taken to hospital, where his leg was amputated in a futile attempt to save his life. The deputy commander of the 22nd IAP Kapitan Balashev, suffered a head wound which later claimed his life – he was posthumously awarded the Hero of the Soviet Union.

These clashes marked the end of the initial phase of fighting around Khalkin Gol. Both sides made an effort to evaluate the situation and take stock, with the Soviets noting that relatively poor performance of their I-15s and even the lack of top speed of the I-16. The Japanese likewise noted their own deficiencies, withdrawing the Italian-made BR.20s from the area and ultimately from combat altogether. The wider situation saw the Japanese begin planning for a second assault across the Khalkhin Gol river, but the Soviets had a plan of their own. General Georgy Zhukov, taking command of all Soviet forces in the area, was building his strength and preparing to launch a strike of his own.