Since the Japanese had largely completed the blockade of major Chinese ports, most supplies destined for the Kuomintang forces were brought into China on the Burma Road. This link allowed Chiang Kai-Shek to import quantities of arms via the British port of Rangoon in Burma, before transferring them along the land route to Southern China. Japan attempted to put pressure on Britain to close the road which succeeded in closing it for four months starting in June 1940. A secondary route allowed the Chinese to import supplies via the port of Haiphong in French Indochina, before transferring them on the rail route to Kunming in Southern China. This route became the target of Japanese aggression during the latter half of 1940.

In June 1940 France capitulated to the invading Germans and Italians, and was forced out of the war. This left France’s overseas territories unsure whether to declare allegiance to the new Vichy regime or to join the Free French cause. Indochina, governed by Admiral Jean Decoux, remained within the Vichy realm but was exceedingly vulnerable to foreign aggression. The Japanese were well aware of this and began to plan an operation to seize control of the colony, and make it one of the first additions to the newly announced ‘Greater East Asia Co-Prosperity Sphere’. Negotiating with Decoux, the Japanese forced the French to accept a deal where 6,000 troops would be allowed to occupy key areas and three key airfields would be turned over. On September 22nd, however, with Japanese troops poised to arrive in Indochina, the demands were increased to 25,000 troops and 5 airfields.

This demand was backed up by force as the 5th Army began to occupy the colony. Japanese planes overflew Indochina largely with impunity, as most of the French air forces were located in the south of the country. Still, on the 25th of September a Potez 25 observation plane was shot down by SMaj Jiro Ieiri of the 84th Independent Chutai in a Ki-27. The following day a Vichy pilot, Sgt Williame Labussiere, flying a Morane-Saulnier 406 fighter shot down a Japanese bomber near Lang-Son. That evening, with key military assets across northern Indochina in Japanese hands, the French capitulated. Soon afterwards Japanese air units began to fly in to occupy their new airfields, including the 14th and 15th Kokutai which were based at Hanoi. These units immediately began flying missions to Kunming, as G3Ms of the 15th Ku raided the city, escorted by A6Ms of the 14th Ku.

Japan was not the only power to recognise the weakness of the French position and attempt to take advantage of it. Neighbouring Thailand, also known by its ancient name of Siam, still harboured some resentment that the French controlled a number of provinces within Indochina (in the modern states of Laos and Cambodia) that had been wrested from the Thais in the 19th Century. Major-General Plaek Pibulsonggram, the Prime Minister of Thailand usually known as “Phibun”, decided that the French acquiescence to Japanese demands represented an opportunity for the Thais to retake the lost provinces. Border skirmishes became common and increasingly violet during the last months of 1940.

Both sides on the coming conflict had substantial air forces. The Royal Thai Air Force (RTAF) was equipped with a mix of imported Japanese and American types, including Curtiss Hawk 75N fighters, Mitsubishi Ki-30 and Martin 139WSM (B-10) bombers, and Vought V-93S Corsair observation biplanes. Japan had also supplied a squadron of Ki-21 heavy bombers, but the crews were not sufficiently trained for combat. The Thai Navy was equipped with a number of Nakajima E8N floatplanes. Opposing the Thais was the French Armée de l’Air, which had far fewer modern types available. Perhaps the most important of these was the MS.406 fighter, a modern monoplane which had performed reasonably during the German invasion of France. The rest of the available aircraft were largely obsolete – Potez 25 reconnaissance biplanes, a handful of Farman 221 heavy bombers, some Potez 542 medium bombers, and Loire 130 seaplanes. 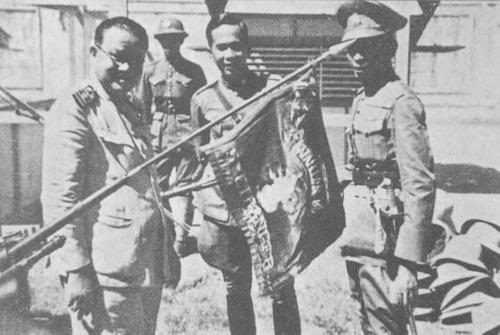 In November 1940 Phibun’s forces began to probe the French positions in the disputed provinces. Artillery strikes hit the French, and cross-border raids were mounted by small units of the army. The RTAF was also in action, launching bombing raids on French bases around the towns and cities of Vientiane, Phnom Pneh, Sisophon and Battambang. The French made retaliatory attacks but did far less damage – these mainly took the form of night bombing raids by single Farman 220s or Potez 542 on the undefended Thai cities, which were little more than harassment attacks. Leading the Thai air attacks were the Ki-30s of the squadrons Foong Bin Phibun Songkhram 1 and 2 which struck French targets repeatedly in support of the invasion.

The first air combat occurred on the 1st of December, as three patrolling MS.406s encountered a similar number of RTAF Hawk 75Ns in the north-eastern area of Thailand. Neither side suffered losses, but the same cannot be said of an engagement that occurred a week later. Another trio of MS.406s was ‘bounced’ by three V-93 Corsairs with altitude advantage, but the French quickly turned the tables and managed to shoot down one of the inferior biplanes in flames near the town of Lakhon, before escaping. With the border skirmishes increasing in intensity, the Thais began to prepare for a full scale invasion. On the 4th of January 1941, the RTAF launched a bombing raid on Dong Hen airfield which was home to the French squadron EC2/595 (Escadrille de Chasse 2/595). The attacking Corsairs destroyed an MS.406 and damaged another.

The following day, the invasion was launched as Thai units stormed into Laos and Cambodia. The French were lacking in modern arms, possessing just a handful of antiquated WWI era tanks, and could do little to stop the advance. Thai bombing raids increased in intensity as they attempted to destroy the handful of superior MS.406s on the ground. On the 10th, 9 Ki-30s set out to bomb Siem Reap airfield, escorted by a pair of Hawk 75Ns. The MS.406s were waiting however, with four of them airborne on patrol, and they claimed both of the Thai fighters shot down. Actually both escaped, but one of the Ki-30s was destroyed by Adjutant-Chef Tivolier. The RTAF also dispatched a raid to Nakorn Wat airfield which consisted of 10 twin-engined Martin 139WSM bombers with a beefier escort of four Hawk 75Ns. The MS.406s again attempted to intercept, but the Thais gained the upper hand and claimed to have destroyed a pair of the French fighters – claims denied by the Armée de l’Air.

The Battle of Koh-Chang

With the Thais in control of the conflict, the French Navy launched an ambitious sortie in an attempt to at least give their enemy pause. Several Thai Navy gunboats were present in ports near the border with Cambodia so Admiral Decoux ordered his most powerful units, the light cruiser La Motte-Picquet and the avisos (or sloops) Dumont d’Urville, Amiral Charner, Tahure and Marne, to sail up the coast and destroy any Thai warships encountered. This flotilla was supported by a squadron of L.130 flying boats based at Ream, plus two more aboard the La Motte-Picquet, which carried out reconnaissance. These reported strong Thai units at Satahib and at Koh-Chang. Captain Bérenger of the La Motte-Picquet, in overall command of the operation, selected Koh-Chang as the target due to its proximity to his flotilla and the fact that he could time his arrival for dawn.

Bérenger’s force arrived at Koh-Chang at 5:30am on the 17th of January. In the port were a coastal defence ship with 8-inch guns, the HTMS Thonburi, and a pair of torpedo boats, the HTMS Chonburi and HTMS Chantaburi. The French split into three groups with the cruiser concentrating on the Thonburi and the sloops attacking the torpedo boats. A lucky shot killed the captain of the Thonburi, which was damaged severely enough that she later sank in shallow water. The Chonburi was also sunk, as was another vessel, the HTMS Songhkla. The French escaped without taking any appreciable damage, and made their way back to Saigon. Whilst they were withdrawing, the RTAF launched several Corsairs to find and destroy the attackers. The French put up a vigorous anti-aircraft barrage limiting the effectiveness of the bombers, which scored a single direct hit on the La Motte-Picquet. This bomb turned out to be a dud.

At this point the Japanese intervened. Anxious to bring the conflict to a close to avert the attention of the Western powers, the Japanese organised a “Conference for the Cessation of Hostilities” in Saigon and encouraged the French and Thais to sign an armistice agreement. Meanwhile the Thai bombing raids continued with some of the largest attacks of the war so far. On the 24th of January three Martin 139s and nine Ki-30s, with an escort of Hawk 75Ns, were sent to attack Siem Reap and hopefully flush out the remaining MS.406s. the French fighters were already airborne however, and thus escaped being destroyed on the ground. In fact as one of the Ki-30s, piloted by Squadron Leader Fuentes, lingered to assess the damage caused by the raid the Moranes fell upon it. Despite several attacks the Frenchmen failed to score even a single hit on the lone bomber before they were compelled to abandon their attacks due to a lack of ammunition.

The last raid of the brief conflict occurred on the 28th. Martin 139s of the RTAF 50th Bomber Squadron raided Sisophon, escorted by Hawk 75Ns of the 60th Fighter Squadron. Three days later an armistice agreement was signed aboard the Japanese cruiser Natori, post-dated to take effect on the 28th. With that the short conflict was over. The Vichy administration, lacking support from the government in France, was forced to cede the disputed territories to Thailand. The Vichy forces in Indochina had lost a number of their most modern aircraft and the chances of getting any replacements were remote. The Thais on the other hand, were rewarded with supplies of more modern Japanese aircraft that would form the backbone of their air fleet during the wider Pacific War, during which they would be coerced into fighting as an ally of Japan.