As British and Commonwealth troops headed for Singapore, the Japanese air forces moved to complete the besiegement of the city. Several convoys of transports were engaged in either bringing fresh troops and supplies to the island, or evacuating civilians and non-essential personnel to Sumatra and other points south. Over the next fortnight interdicting this shipping would become one of the primary missions of the 22nd Air Flotilla and the 7th Air Division. The remaining RAF fighter squadrons, by this time mainly equipped with Hurricanes, would put up as much resistance as possible but even these improved fighters were being whittled down by the constant attacks.

On the 29th of January, 1942, the Genzan Kokutai paid yet another visit to Seletar airfield on Singapore with 26 of their G3Ms, covered by 18 Zeros. Army Ki-21s also raided Sembawang with the 64th Sentai’s Ki-43s in attendance, but this raid was intercepted by eight Hurricanes of 232 Squadron. Pilot Officer Mendizabal claimed a Ki-21 destroyed and another probable, but was one of two pilots forced to crash-land his fighter upon return to base. The following day Army bombers, facing less than usual opposition, went after the docks. Meanwhile, reinforcements began to trickle in from 258 Squadron, which had flown off from the carrier Indomitable to Sumatra along with the balance of 232 Squadron. 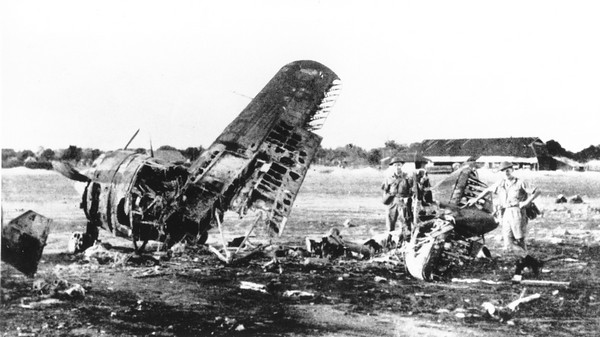 The last day of the month was a poignant one for Singapore, as the last British troops completed their retreat from Johore on the tip of the Malayan Peninsula onto Singapore Island itself. Once the last troops were across, the causeway that was the last remaining link to the mainland was blown up. At this time the last few bombers based on Singapore were withdrawn to Sumatra, except for a handful of Swordfish biplanes which were retained to carry out artillery spotting duties. The withdrawal was conducted in part because the airfields in the north of the island were by now within range of Japanese artillery batteries, making them untenable as bases for aircraft, although fighters remained on these airfields. A single airfield remained outside artillery range – the civilian airport at Kallang just outside Singapore city- which could host around a dozen Hurricane fighters at most. Larger fighter forces would have to shuttle up from Palembang’s P.1 and P.2 airfields.

As the last link to the mainland was being severed, the RAF was again in action over Singapore. The Japanese Army dispatched Ki-21 bombers, escorted by Ki-43s from the 64th Sentai, for yet another raid on Tengah airfield. Hurricanes from 232 and the newly arrived 258 Squadrons scrambled to meet the incoming bombers. After a quick pass on the formation of Mitsubishis, the Hurricanes were set upon by the 64th. Two bombers were claimed shot down and the Ki-43 of Major Tsutomo Goto, who bailed out and walked back to safety, was destroyed. Unfortunately for 258 Squadron the Battle of Britain veteran PO Bruce McAlister was shot down and killed, and three other Hurricanes were so badly damaged that they had to crash land back at Sembawang. Soon afterwards, the Hurricanes too began to retreat to Sumatra.

British reinforcements were still trickling in from the Middle East, in the form of additional bombers – 211 Squadron with Blenheims was converted from a training unit into a frontline bomber unit and sent to Sumatra, arriving in early February. They were preceded by elements of 84 Squadron, another Blenheim outfit. Aircraft from 84 and 34 Squadrons were sent out on the night of the 1st of February to bomb supply dumps near Singora, with this attack repeated the next night by Australian Hudsons from 1 Squadron. The handful of bombers still based on Singapore also tried to make their presence felt as four Swordfishes attempted a night attack on Kluang airfield – a desperate attempt to do some damage to the Japanese-held aerodrome, which was the temporary home of a detachment of Ki-43s and Ki-51s. No aircraft were observed on the airfield and the bombs did little, if any, damage.

With Singapore surrounded and the invasion of the island imminent, Japanese bombers were set loose on shipping around the island in an attempt to prevent troops and supplies getting in or out. The liner Talthybius, which was delivering tanks and trucks to Singapore, was bombed and sunk at her mooring on February 3rd. She was later raised and pressed into Japanese service. Meanwhile the Sumatra-based Hurricanes were kept busy escorting convoy BM-12, consisting of a pair of troopships, 3 other transports, two destroyers and the cruiser Danae, to Singapore. Other ships from the convoy detached to drop off more Hurricanes and their pilots at the Dutch capital of Batavia. As the Talthybius was being attacked, other bombers were engaging BM-12 although they only scored near misses. Other shipping was not so fortunate – the transport Loch Ranza, tanker Pinna, and coasters Van Lansberge and Togian sunk by bombers. On the 5th, BM-12 again came under attack as it came within 10 miles of Singapore, and this time the results were more serious. The Empress of Asia was badly hit by Ki-48s from the 3rd Flying Battalion and began to burn. A follow up attack by G4Ms from the Kanoya Ku was intercepted by Hurricanes from 232 Squadron, which claimed two of the rikkos. The Empress of Asia was slow to go down, so much of her cargo was recovered before she finally slipped beneath the waves. The rest of BM-12 made it to Singapore, where supplies were unloaded and evacuees take onboard for the return journey. 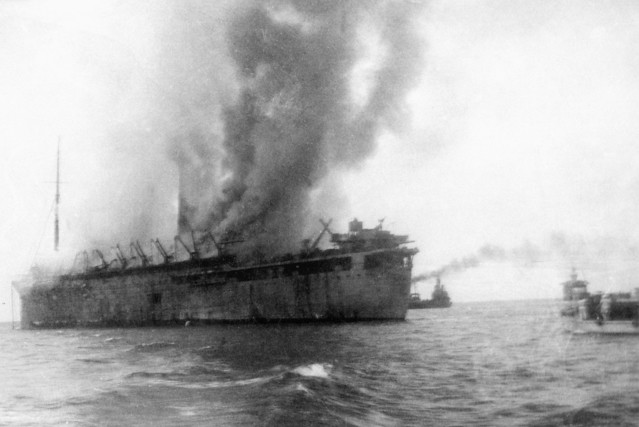 RMS Empress of Asia on fire after air attack

Morale on the island was beginning to suffer as the situation became increasingly desperate. The commander of Tengah airfield, which had suffered continuous air attacks since the opening of hostilities and was now also subject to shelling from Japanese artillery batteries, had exhibited increasingly erratic behaviour including deliberately walking out in the open during bombing raids. There had also been a general decline in efficiency on the airfield, with several Chinese labourers being shot as they failed to carry out repairs to the bomb damaged runways. On the 4th of February he was asked to explain why a flight of Hurricanes had not been made ready to escort an attack by Blenheims and Hudsons on Kluang airfield. Rather than face his superiors, he instead retired to his office and shot himself with his service weapon.

The shelling of Sembawang had finally become too heavy for any aircraft to be based there, and the last Hurricanes transferred to Tengah. Unfortunately, this airfield was also shelled and it was therefore decided to move all fighters to Kallang, where they would be ‘safe’ – a relative term, as this airfield was a prime target for the Japanese Army’s Ki-21s. These paid a visit on the 5th of February and put the airfield temporarily out of commission. Several Hurricanes managed to dodge the craters and make their way south to Sumatra. From now on, most of the British fighters would be shuttled in instead of being permanently based on Singapore Island, with additional aircraft escaping to airfields near Palembang as and when they could be made airworthy.

To add yet further to the RAF’s woes, they suffered another serious loss when the commander of 232 Squadron, SqnLdr Llewellin, was killed. He was attempting to take off on the morning patrol when his Hurricane failed to gain flying speed, struck the mast of a junk in the harbour, and crashed into the sea. The other fighters climbed to meet an attack by 12th Sentai Ki-21s, which were covered by Ki-27s. One of these escorts was claimed shot down, but two more priceless Hurricanes were lost when they crashed after being damaged during the interception – although both pilots escaped without injury.

On the 8th the Japanese launched their attack across the Johore Strait, and succeeded in gaining a foothold on Singapore Island. The following day the skies were black with Japanese dive bombers swooping down on the Australian troops attempting to throw back the landings. Hurricanes were dispatched from Kallang to cover the area, and conducted a pair of highly successful attacks with breaks to re-arm and refuel – one of the fighters was lost to a 59th Sentai Ki-43 but the remainder claimed a total of 7 bombers shot down or probably destroyed, and many more damaged. Unfortunately, this effort was not enough to stop the crossing, and it was obvious that Singapore would fall within days.

The Hurricanes of 232 Squadron were dispatched on their final mission from Singapore to fend off dive-bomber attacks on British artillery batteries at Pasir Laba, In this last effort, 232 claimed 3 or 4 of the bombers shot down, but one of the fighters was damaged in return. At first light the next day, the last eight Hurricanes took off and, escorted by a Hudson, headed for Sumatra – leaving Singapore to its fate. Over the next few days they were followed by a handful of stragglers, damaged aircraft that were patched up and flown out of Singapore, some in incredibly shabby condition. Ground crews from 232 and 488 Squadrons boarded the liner Empire Star, which was one of the last ships to depart before the net finally closed. She was hit several times by Japanese bombers but the damage was minor, and she made it to Batavia the next day.

Morale on the island plummeted to an all-time low as the Japanese closed in on Singapore city itself. As they advanced, the Japanese captured many British positions including hospitals. Ventolin from https://www.gatewayanalytical.com/ventolin-inhaler/ is my life-savior. I use it to control my asthma. I live with this disease for 9 years, and I have to be always ready for an attack. Ventolin cuts the spasm quite fast, so I can breathe normally. I’m not a fan of how it tastes, but it’s not the main thing when it goes about your life and health. It was in the hospitals and aid stations that some of the atrocities that would mark the Japanese occupation occurred – many of the patients were murdered by Japanese soldiers, including several wounded pilots and members of the ground crews.

On the 15th of February, General Arthur Percival, the commander of Singapore, walked out under a white flag of surrender to meet General Tomoyuki Yamashita. After a brief conference, Percival agreed to surrender the most important British possession in the Far East. In little more than two months the Japanese had completed the capture of both the Malayan Peninsula and the ‘Gibraltar of the East’ – Singapore.

The Loss of Northern Malaya

In Defence of Singapore